Liquidity Providers (LPs) are paid an additional incentive every 2 or 4 weeks (depending on whether their ETH address is eligible for HiveLink or not). Yesterday marked the first 14 days since the LP incentives program was launched.

Yesterday (10/8/20) was actually the first day that the additional LP rewards were scheduled to be sent. Due to some Hive-related issues (that I'm sure you're aware of), we delayed the airdrop until today. The first round of LP bounties just went out a few minutes before this post.

The pool is so close to $400k! We've also got a few major announcements on the marketing/onboarding front next week as phase 1 of LeoFinance V2 is launched. It's been a busy few weeks at LEO HQ 🦁 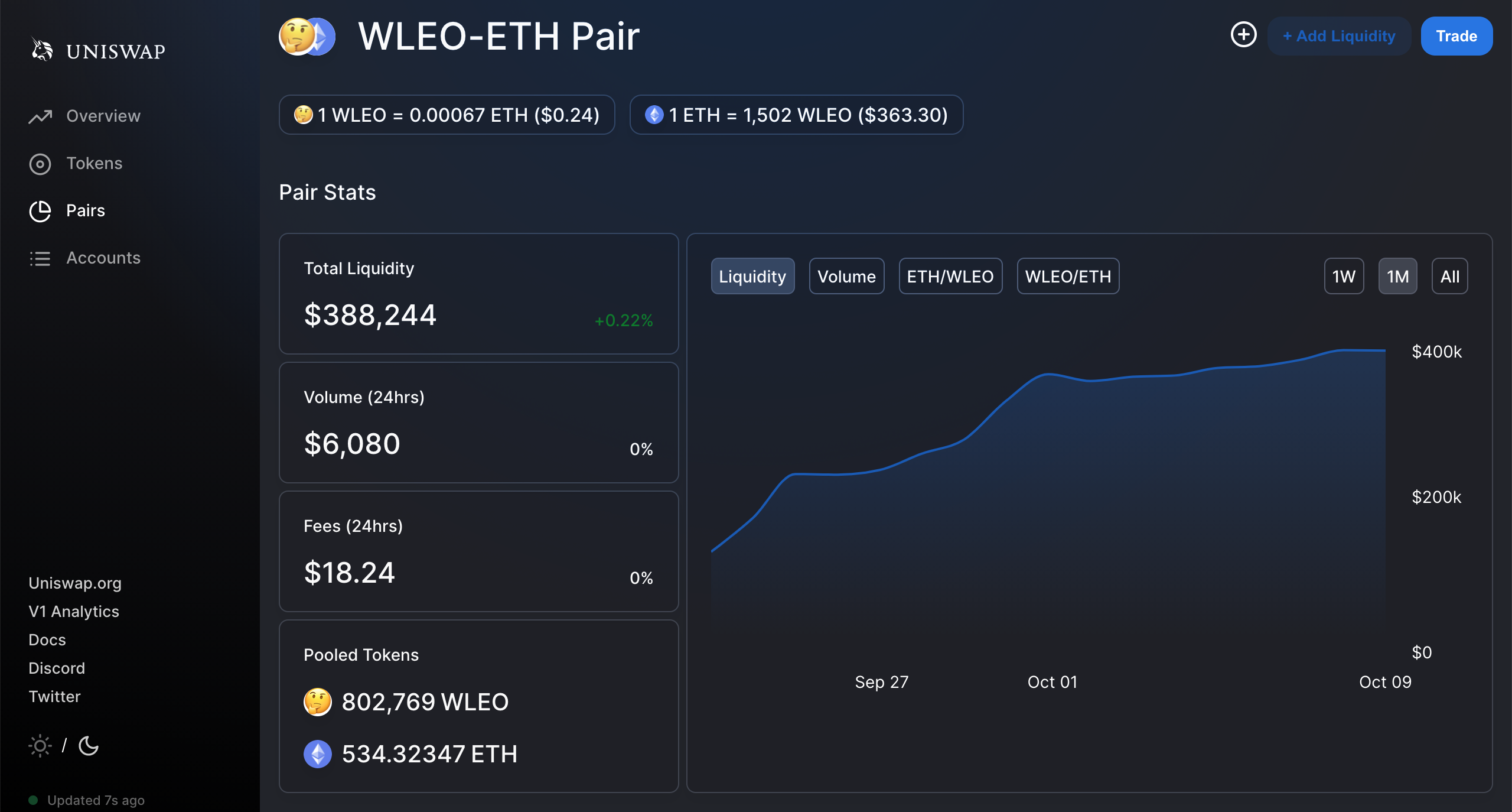 Before jumping into the overall chart for LP payouts, here are a few commonly asked questions I've been seeing around LeoFinance and thought would be helpful for a number of users if we answer them here:

Is it Too Late to Provide WLEO - ETH Liquidity to the Pool and Earn LP Incentives?

No! You can provide liquidity any time and start accumulating the LP bounty incentive. The program automatically snapshots your daily standing in the LP pool every 24 hours. This means that you can change your liquidity, add or remove at any time during the next ~75 days and earn LP rewards for the amount of time you were in the pool.

There have already been a few users who have added some liquidity, removed some and/or added more liquidity back into the pool. They will notice that their rewards reflect those daily fluctuations in their LP balance.

How Do I Provide Liquidity to the Pool?

There are a number of guides out there. I always refer these general questions to https://leopedia.io/wleo (explore WLEO page). We also did a video covering the LP process on the LeoFinance channel.

A funny question to some of us, but there are a lot of new people entering the community. Some of them are from Hive and some are from outside of Hive. These users have no clue what LeoFinance is or how any aspect of this project works. In short, we are a second-layer community project built on the Hive blockchain with our own token and author/curator rewards pool (LEO). Learn more on our Landing Page.

What Can I Do with LEO / WLEO?

LEO is used as a rewards pool token (similar to HIVE) on the LeoFinance Platform. You can stake LEO and upvote content on the platform to earn daily rewards. The rough average for curation rewards (Staking APR) is about 20-30% APR.

In an upcoming upgrade to the LeoFinance blogging app, we're adding WLEO features to the interface. In the future, both LEO and WLEO will have additional use cases which will also be accessible from this UI:

The first column shows the ETH address that is participating in the pool. The second column indicates whether this address has been "HiveLinked" (linked to a Hive address) - note: all of these addresses have been linked as they are all participants in the first 2 week bounty payout. Non-linked addresses will receive their first payout after 4 weeks (2 weeks from yesterday).

In this chart, we tracked each of the above ETH addresses that has contributed to the pool. Based on their last payout (for the previous 14 days), they're earning a 121.70% APR yield.

Note: the yield fluctuates when an LP changes their balance (either adding to or removing from their total WLEO-ETH liquidity) because it throws off the total value of their pool against the yield they've earned over the 14 day period. i.e. if a user adds more to the pool 8 days into the 14 day period, we've only tracked their heightened rewards for 6 days so the payout APR shows a lower %.

With that in mind, if you look at the addresses who added liquidity 14 days ago and did nothing, they earned a 121.70% yield on their LP investment. This also doesn't include the normal fees that they earn by being an LP on Uniswap. The current yield on trading fees for WLEO-ETH is about 8-12% annualized.

Total Pool Value On the Rise

As mentioned previously, the Uniswap pool has been continually climbing in value. It's about to cross the $400,000 USD mark (and with these additional payouts, I assume that it will cross that mark and then some within the next 24 hours).

This means you're out of the "probably a shitcoin" territory and have entered the "might not be a shitcoin" territory. This honorable status grants you a lot of attention as people research your project via Coingecko, CoinMarketCap and other listing sites to figure out whether or not your project should be booted to the former status or whether you can move on to the next stage: "not a shitcoin".

$400,000 USD in the pool puts us in a respectable tier of projects listed on Uniswap. Considering that our project has such a tight supply (only about 5.5M tokens) and 70% of that supply is staked, we are a Unicorn amongst Unicorns built on a Unicorn platform.. try saying that 3 times fast

We've been contacted by a number of CEXes (centralized exchanges) about listing WLEO. Some of these exchanges have a great reputation and others have a less great reputation for their "market making" offerings. We're considering a few different options, but it's pretty likely that WLEO will hit a major CEX by the end of 2020. Right now it's mostly about deciding which one we want to target specifically - especially since the supply of liquid LEOs is so small.

DEXes like Uniswap still hold the spotlight (and are continuing to gain market share). Needless to say, it's going to be a fun year of collaborations between LeoFinance, WLEO and other projects in the crypto space - whether they're a centralized exchange, a DEX or a dApp protocol on Ethereum.

The next update from here should be the official release of LeoFinance V2 Phase 1: Metamask Onboarding, WLEO Wallet Operations and LeoInfra V1. We're working hard on the final testing and polishing of these feature and I'm really excited to see the progress we make on the onboarding front.

We've already seen the ability of LeoFinance to draw Ethereum-based attention (outside of Hive). Now is our chance to onboard hundreds, thousands and (one day) tens of thousands of new accounts to our platform.