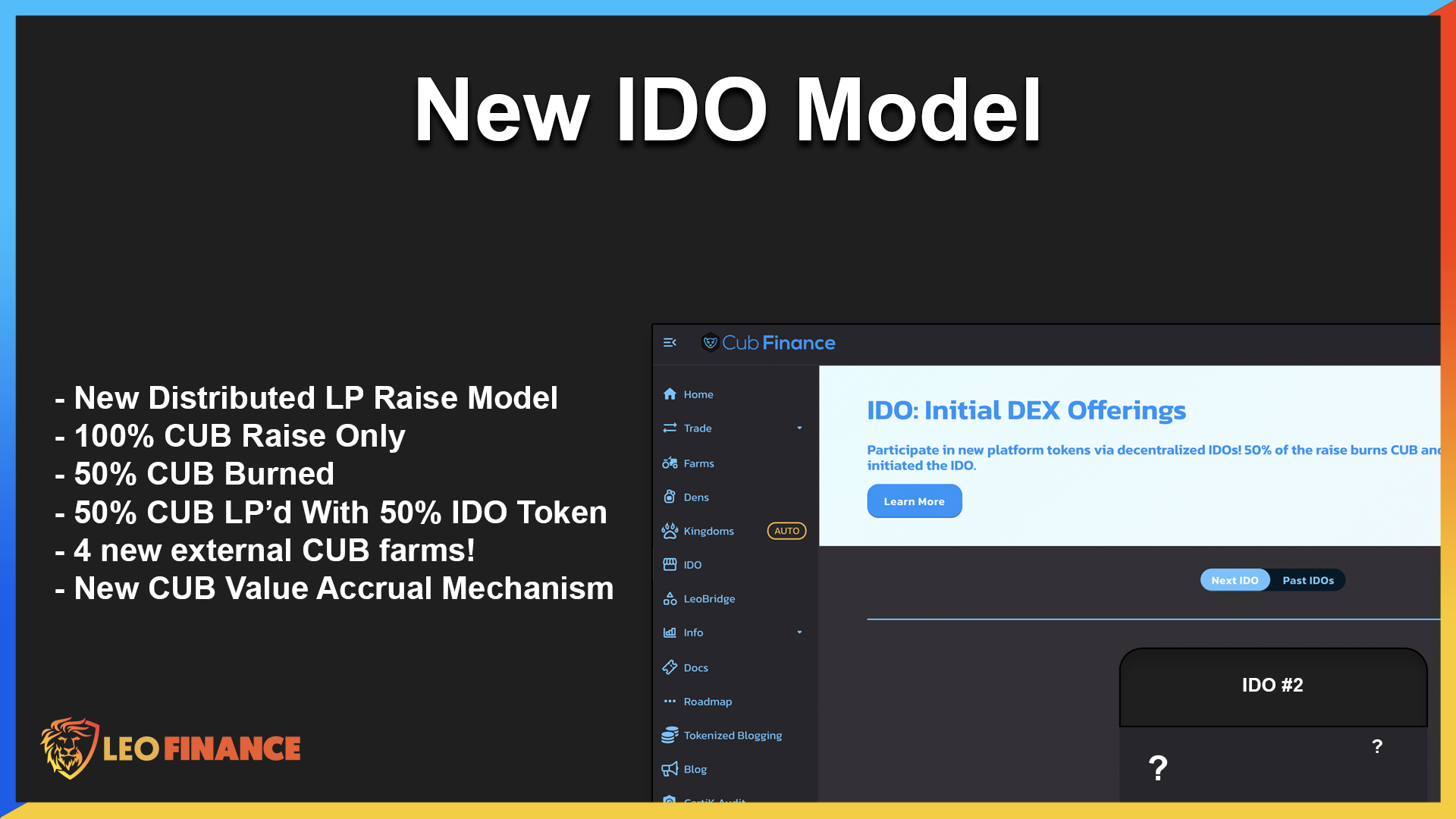 The IDO technology we built for CubFinance worked flawlessly from a mechanical perspective. CUB-BUSD went in, CAKEPOP went out. The round was opened when we wanted it to open and it closed at the exact time we wanted it closed.

So with all of this in mind, the question everyone's asking is: why CUB not moon overnight?

In this post, we'll examine the aftermath of IDO #1 and also talk about the future of IDOs on the CUB Platform and how they are set to radically improve the tokenomics, growth and sustainability of CubFinance.

IDO #1 utilizied our CUB-BUSD model for fundraising. This model is utilized by many of the top BSC platforms who have built launchpads.

Our technology performed flawlessly but the tokenomic impacts weren't quite as fast as everyone wanted them to be.

Yes, we burned nearly as much CUB as we had burned since the very beginning of CubFinance.

In defense of this tokenomic mechanism, consider Bitcoin Halving events. Every 4 years, BTC halves the block rewards. This means that incoming supply to miners (inflation) is reduced by half every 4 years.

The price impact is never priced in right when BTC halves. Theres some news impact and people prepare for it by buying BTC so there is a bit of an impact (such was even seen when CUB went up to $0.75 pre-IDO #1).

The major impact on price for BTC halvings, however, doesn't come until months or even years later.

It means that existing CUB holders now hold a larger % of the total supply relative to what they had before. 1 CUB is worth more in terms of % ownership post-IDO than pre-IDO.

The impact of this is not expected to be overnight. It's baked-in to the ecosystem. When there is eventually a boost in demand, there is less CUB to be purchased and thus, an equivalent boost in demand will have a much larger positive impact on price.

This still begs the question - wen does the moon for CUB come?

In the long-run, IDO's will continually burn more and more CUB. Dwindling the supply and doing more than combat inflation: CUB will invert and run deflationary when you work out the tokenomics until the end of this year.

So why doesn't CUB moon on this news?

The first IDO showed us that a CUB-BUSD IDO actually has a short-term negative impact on price as CUB Kingdom hodlers asymmetrically pool their CUB into the IDO by taking 100% CUB, selling 50% into BUSD and then depositing the 50% BUSD + 50% CUB.

From this point forward, we don't plan on holding anymore CUB-BUSD IDOs. This first one was a nice tokenomic test to see what happens during an IDO event both in short-term impacts and (what we have yet to see) long-term impacts from burning massive quantities of CUB.

The next IDOs that we have scheduled will utilize a new model for IDOs. In fact, it's quite similar to the original IDO model we built for #1 with 2 key changes:

As a reflection token, CakePop didn't offer any external pools for CUB.

The next IDOs will all have liquidity pools and their own farming economies.

In fact, the next major IDO (outside of Polygon CUB) is an extremely impressive AMM (Automated Market Maker) project. It's designed very similarly to Biswap & Pantherswap: allowing users to refer each other in to the AMM and earn back % of the fees paid in swaps.

Why is this important for the CUB-based IDO?

The point of these platforms coming to CUB for an IDO is so that they can seed initial liquidity in their pool and distribute their token to a wide and active community.

Originally, the CUB IDO mechanism would allow them to raise BUSD for their LP and then they would go out and match that BUSD with their own token to create the first Liquidity Pairing and deposit raised BUSD + their token.

With our new model, these platforms will raise 100% CUB. 50% of the CUB will get burned and that 50% of value will get replaced with XYZ token from the IDO.

The IDO mechanism will then LP the CUB + XYZ tokens and create the first liquidity pool pairing for the token that's running the IDO.

The amazing thing about doing this with new farming platforms is that they have their own farming incentive pools. When CUB is added as the main base pair for their token, the CUB-XYZ Farm on their platform will have massive Liquidity Pool incentives for LP deposits.

For this IDO Project that's building a Pantherswap-like AMM, this means that IDO Participants will be highly incentivized to take their newly acquired CUB-XYZ LP Tokens and LP them on XYZ platform's farm.

We'll also be able to spin up a Kingdom contract that utilizes their farming incentives to autocompound back into CUB-XYZ token.

Once deposited, our Kingdom contract will deposit those LP Tokens on their farm, earn XYZ token rewards and then autocompound those rewards back into CUB-XYZ tokens (selling 50% of the XYZ token rewards into CUB and then pooling both halves back as the base asset).

This creates a continuous, automated CUB reinvesting mechanism for anyone sitting in the Kingdom.

I think this new model is a great lens into our Ethos as a project: release features and rapidly iterate and improve them. We built a super impressive IDO Mechanism and that performed exactly as expected from a technical perspective.

The tokenomic impacts weren't quite as great in the short-term (even though we believe the long-term impact of burning that much CUB still remains).

So, we dissected IDO #1 and went back to the drawing board. This led us to our new model for IDOs that we discussed here in this post. 100% CUB deposited, 50% CUB burned, 50% CUB matched and LP'd with target XYZ IDO token.

With our upcoming IDO Partners, this is going to be an amazing thing to watch. 4/5 of them are all farming platforms with Liquidity Pool incentives.

What this means is that once all 4 of these IDOs are complete, there will be 4 new liquidity pool pairs for the CUB token on Binance Smart Chain.

What's even better? ALL 4 of these new Liquidity Pool Pairings will have externally funded liquidity mining incentives that are paid out by these 4 separate platforms.

What's even better than that? ALL 4 of these new LP pairings will have Kingdoms on the /Kingdoms page which will autocompound the XYZ farming rewards back into the -CUB base asset. Creating an autonomous and continuous buying pressure for CUB.

What's even better? The 50% CUB that we want to burn from each IDO STILL GETS BURNED. We're not sacrificing anything with this model. In fact, it seems better from all perspectives and we've already discussed the change from raising BUSD to a distributed CUB raise model and all of our upcoming IDO partners have signed off on the change.

In last week's AMA, Neal mentioned this idea of snowballing the amount of CUB that gets burned... creating an exponentially deflationary model for CUB.

Despite the other shortcomings of IDO #1, we still burned 180,000 CUB from the supply. With these scheduled IDOs, we're going to burn CUB to the tune of MILLIONS of CUB. We're talking about anywhere from 30-75% of the existing supply of CUB.

As each IDO burns CUB, the next IDO will become more highly anticipated. As that IDO is successfully funded, the next becomes that much more anticipated. As the success of all these IDO funding rounds makes waves in the small-mid-cap BSC platform niche, there will be dozens of projects knocking on the doors of CUB asking for similar IDOs.

This is an incredible time for CUB and the Launchpad branch of CubFinance is just getting started!