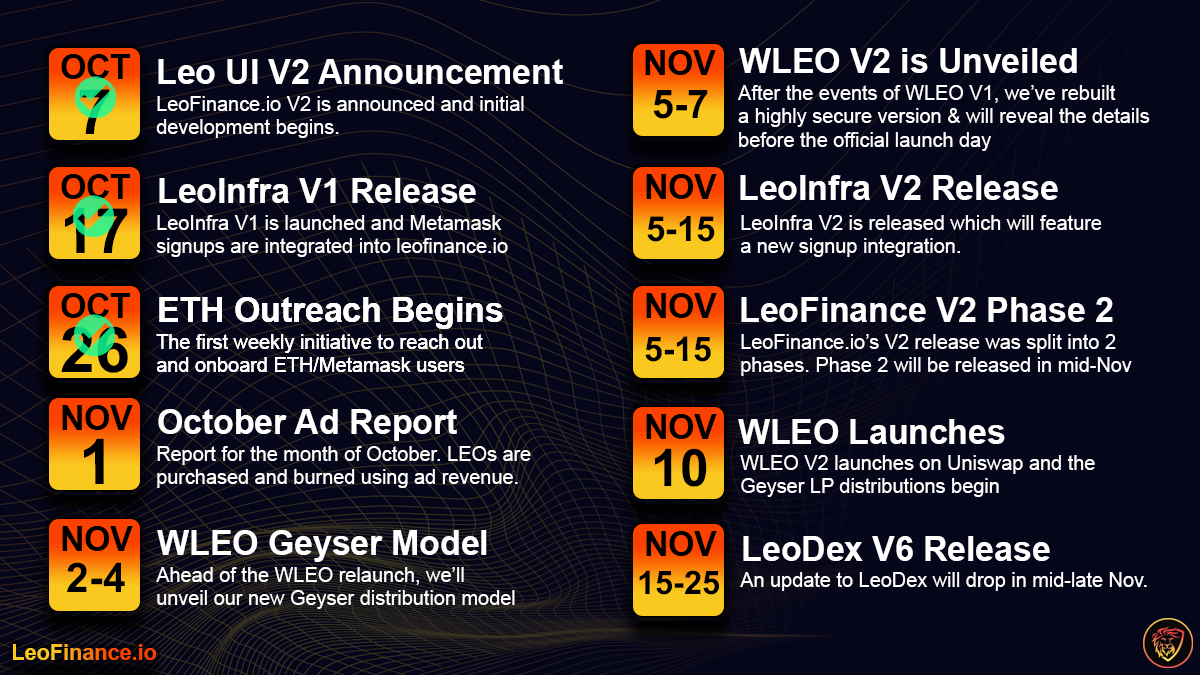 Earlier in 2020, we released a roadmap for the year. In it, we discussed our general objectives throughout the year and outlined some precursors to future developer updates that would be released as new features and LeoApps were developed.

This 2020 roadmap got a great response as many in our community and beyond wanted to get a general sense of what LeoFinance was up to and what our long-term goals are. The one issue with having a roadmap like this is that it is so general and broad that things change in real-time and it's hard to pin down more exact dates and details.

I often see comments and messages in our discord asking various questions, usually around the premise of "what's next?"

After asking for some feedback from a few community members, I came up with the featured image of this post. The LeoFinance team and our developers are continuously working on various projects all at once. The major benefit to having multiple people/devs involved is that we can simultaneously build separate aspects of the LeoFinance project. This is one of our secret sauces to cranking out updates at a rapid pace.

With these rapid updates come a lot of questions. Things are often moving so fast that it's hard to pin down what happened yesterday, what's happening today and what is being built tomorrow.

Since our roadmap is in constant flux, we came up with this idea of a "Month-to-Month Roadmap". In these M2M roadmaps, you'll see our internal targets and release dates. These are all of the projects that are currently being worked on with a goal to deliver in the next ~30 days.

Throughout our official posts from this account, @leofinance (which are usually a few times per week) along with our other social accounts and channels (Discord, Telegram, Twitter, Medium, etc.) we'll update our community on the M2M roadmap progress. As you see above, we're checking off the delivery of various aspects of our monthly roadmap as they happen in real-time with a green ✅.

At the end of each month, we'll release an updated M2M roadmap + post to accompany the coming updates.

Spreading the Word and Onboarding

Our initiatives to onboard new users have been doing incredibly well. Between our two onboarding mechanisms (Metamask Signup and direct Hiveonboard acc. creation), we've created over 200 Hive accounts in the past 30 days. We're still in the process of creating a means to compile data on the activity of these accounts.

With this tool, we'll release regular reports on our onboarding activities. The difficult part of the process is separating existing Hive users who have created an alt account from the truly new users who just signed up for the first time. From this initial 200, we assume that the majority are Hive users creating alts and testing our onboarding process. With that said, if you've been watching the trending page and our Discord server, you'll know that we've had well over a dozen new signups in the past 30 days who have become active in the community.

@taskmaster4450 wrote a cool post following the journey of one of these new account signups as they went from being a non-hive/leo user to actually purchasing HIVE to buy LEO and power up both HIVE and LEO. It's amazing to watch this play out in real-time and also know that we're just in the beginning stages as we scale this onboarding program and bring in a whole new generation of Hivers and LEOs.

An important aspect of onboarding and keeping new users in the loop is having an easily readable roadmap. This is another reason why the M2M roadmap has a great deal of utility. It keeps our current userbase informed and up to date on what we're doing but it also allows onlookers from outside of our community to easily keep up with what's happening on LeoFinance in real-time and also be informed about what's in the near-term pipeline.

As you can see in the M2M roadmap, the WLEO 2 release data is fast approaching. A lot of work has gone into WLEO 2 and there are a lot of aspects that we need to talk about. The first in a line of updates that will precede the WLEO 2 updates is a post about our new Geyser Liquidity Provider incentive model. 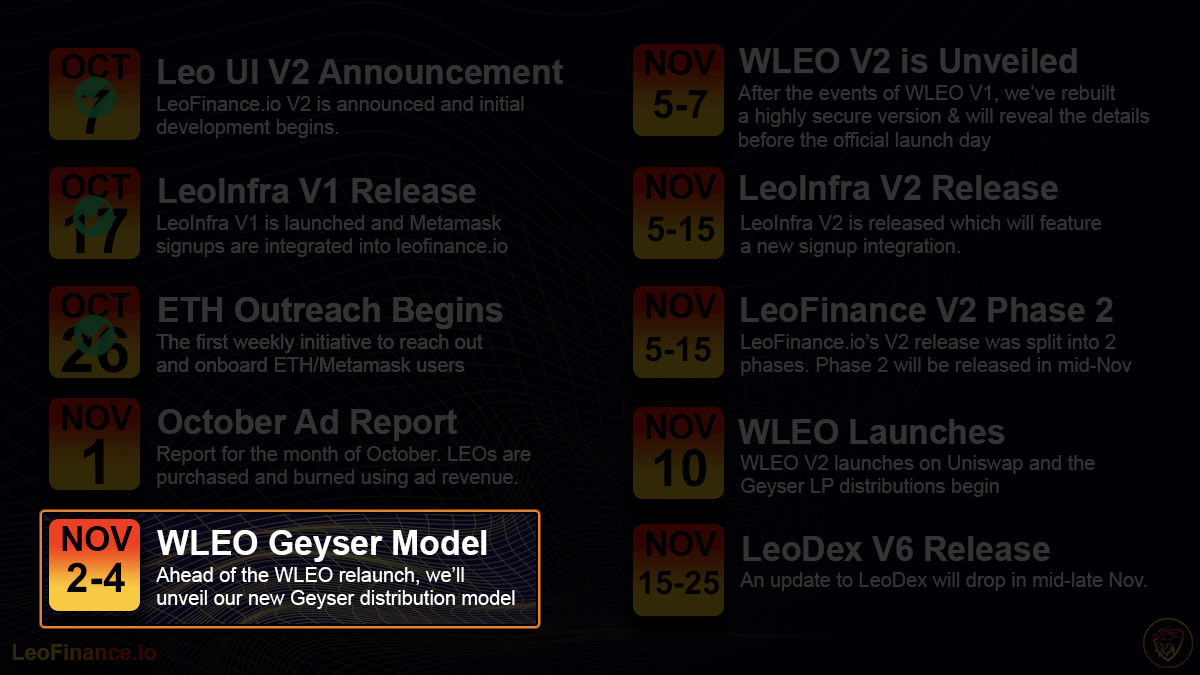 Right now, there are two major pools that allow you to earn LEO:

The new Geyser LP model will introduce a 3rd major pool to our economy. The dynamics that this brings to LeoFinance are incredible. As many have already said in various chats about this model on Discord: it's yet another major development that contributes to the change of LeoFinance from your standard blogging/Hive community into resembling other major crypto projects. Especially in the DeFi/crypto finance realm.

Liquidity providers bring an enormous level of benefit to any token economy. With WLEO 1, we all witnessed the impacts of having our token priced against ETH. We also witnessed what it means to have true depth of liquidity where we saw days of $20,000 - $50,000 USD in trading volume for the wLEO token as opposed to our daily average on Hive-Engine which is around $2,000 USD.

As we release our new cold storage-based model for Wrapped LEO and then rebuild our pool, incentivizing LPs will take on an entirely new shape. Our goal is not just to incentivize LPs for the first 90 days of the pool, but rather create a model that can incentivize Liquidity Providers in the WLEO-ETH pool and any other WLEO-based pool for the years to come. More details about this new aspect of our ecosystem will be released sometime between November 2nd and the 4th. 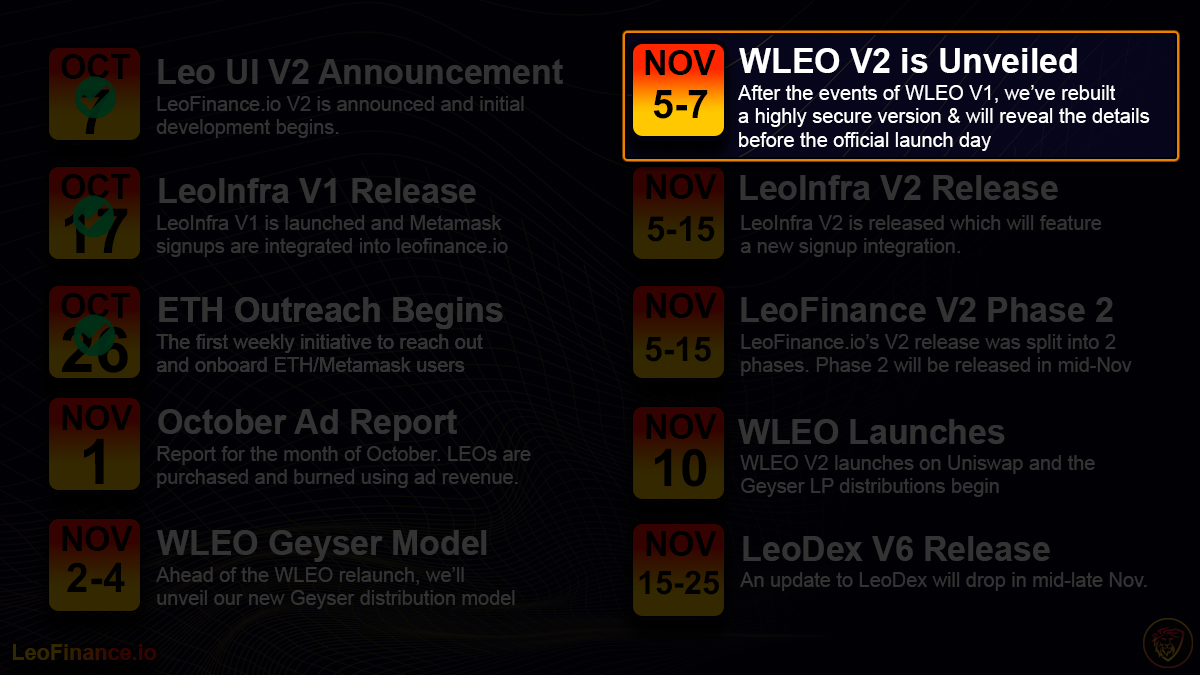 Around Nov. 5th, we'll unveil the details behind our new model for WLEO which will feature a limited token supply and cold storage. These safeguards along with a long list of other security measures are aimed at creating a model for WLEO that will take us into the future. Many of these features - i.e. the limited token supply cap - actually benefit WLEO in a host of other ways outside of security.

This will help with data aggregator listings like Coingecko/CMC who will now be able to properly list WLEO's market cap ranking. It will also answer a lot of concerns raised by ETH people (non Hivers) who questioned the model of having an infinite supply - as WLEO 1 was designed. Before the WLEO 1 attack, we also were in talks with a few mid-cap exchanges about listing WLEO. They also raised concerns over the infinite supply.

In a nutshell, WLEO 2 will bring a lot of tokenomic changes and security measures. Our #1 priority is security above all else. With these updates, come a lot of benefits to WLEO and our ability to reach out to the ETH community (also an important aspect of our onboarding through Metamask initiatives). 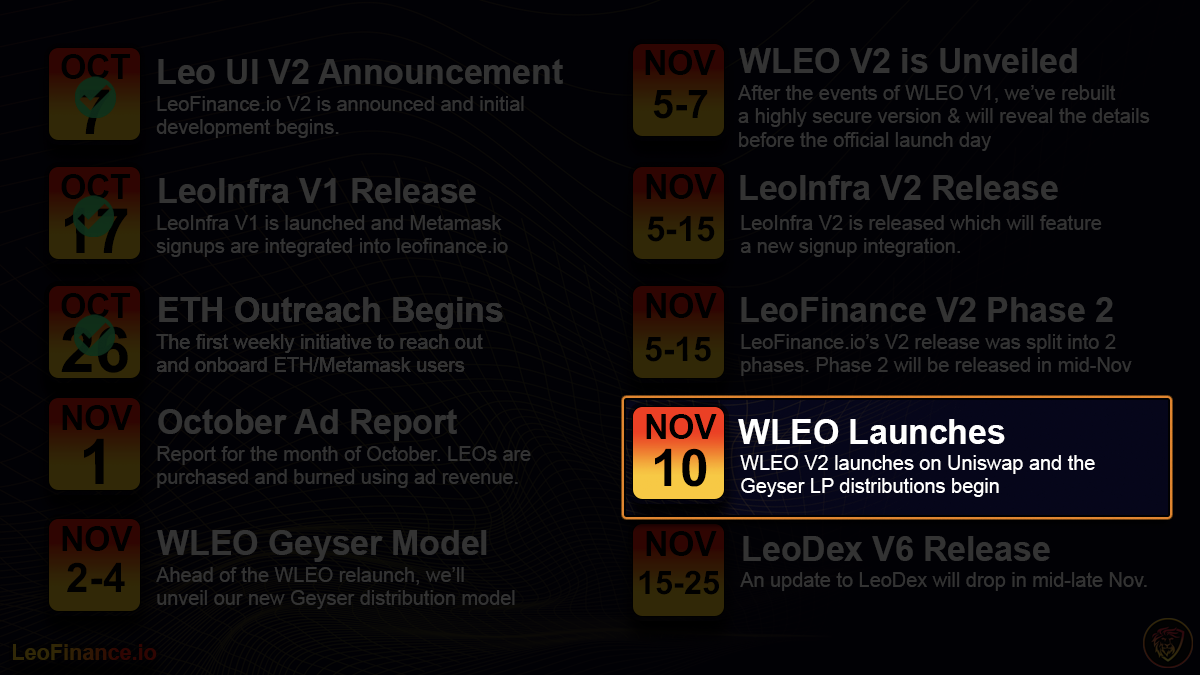 The final phase of development on the V2 release of the LeoFinance.io UI will be completed around the 5th of November - 15th. Our internal goal is to have it released into production 2-3 days before WLEO 2 is launched. 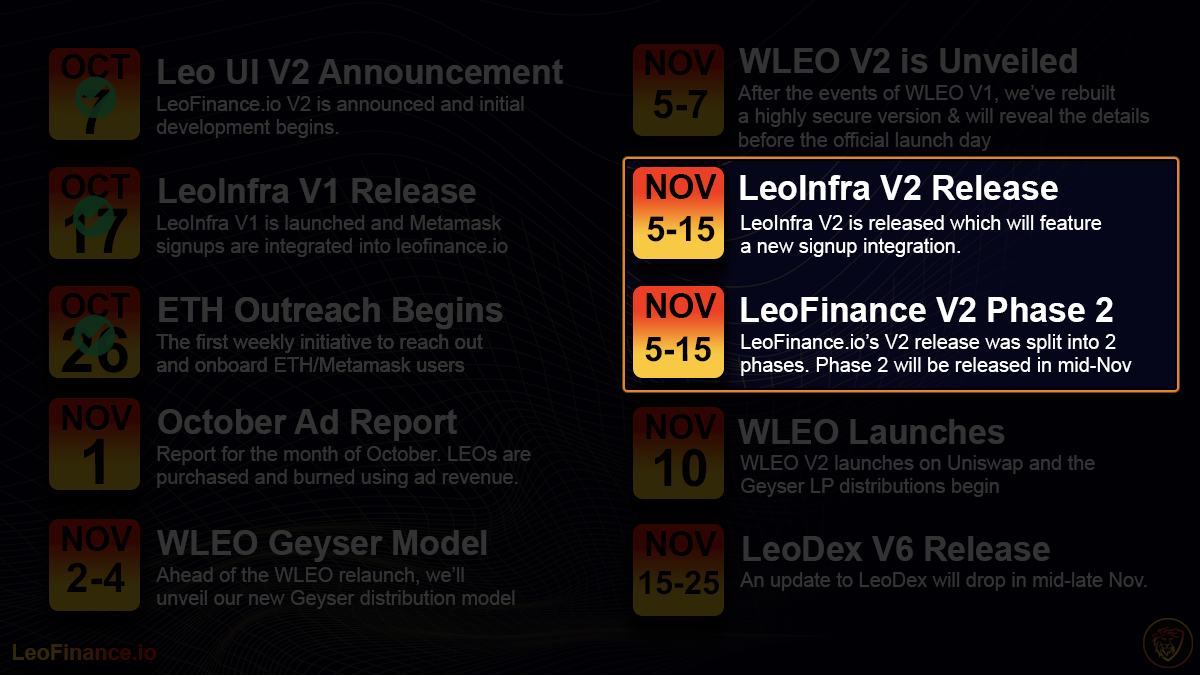 With this update come a myriad of changes to the LeoFinance UI. Many of these changes were requested by the community as feedback on the current status of our interface. The vast majority of these updates are aimed at core features and functionalities that will make your daily life as a 🦁 that much easier.

LeoInfra V2 is also closely tied with this update and will launch alongside the V2 UI release. This will introduce a new onboarding integration for account signups on https://leofinance.io. We put out a poll on Twitter for users to guess what this next integration might be.

If you're curious about the V2 UI release and the features it contains, check out the @khaleelkazi account today for a video update on this roadmap + details on the new features in our upcoming UI release.

The goal of this roadmap is not only to inform you - the LEO community - on what we're buidling, it's also to spread the word out there on other social platforms about what LeoFinance is really about. We ask that you take to the streets of Twitter and other social channels and share this M2M roadmap. Maybe post a Tweet with the image, tag us and tell everyone which part of the roadmap you're most looking forward to.

Also please leave a comment below with some feedback. What can we improve in these updates? What do you want to see more of or less of? We thrive on the community's voice and ideas like this roadmap begin with your feedback.