Vote to Get wLEO Listed on Blockfolio! 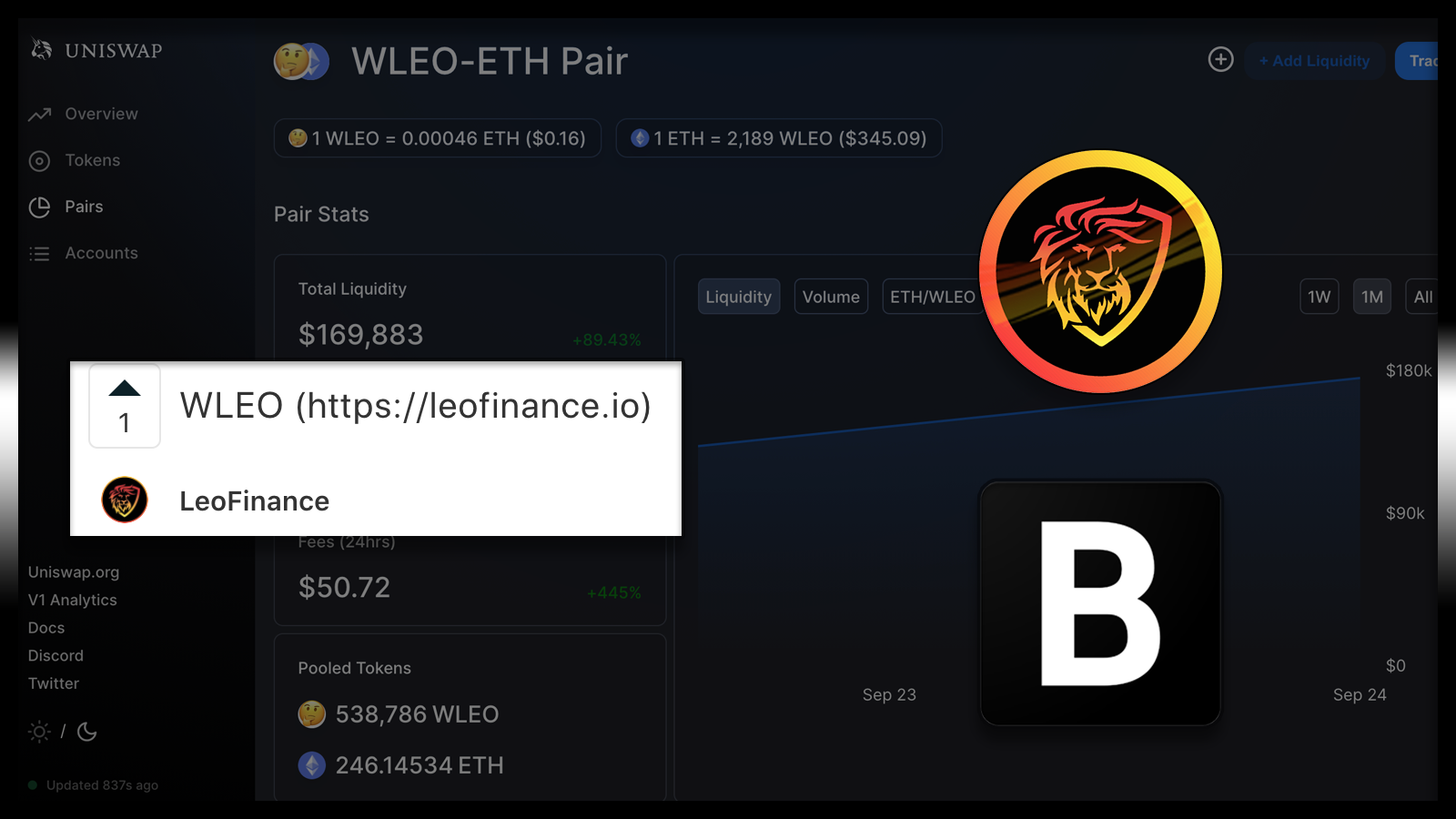 It's been 24 hours since the official launch of Wrapped LEO (wLEO). The past few weeks have been incredibly exciting as the culmination of several projects have come full circle.

With wLEO's launch, we also brought a new landing page, an exchange listing on Uniswap, the wLEO explore page, the wLEO interface itself and countless hours spent researching and connecting with different DeFi communities to spread the word about our launch.

We've started to see some new faces trickle in and get involved in our Uniswap pair outside of Hive users. This is an amazing feat and we're just getting started.

In the past 24 hours, the wLEO - ETH pair on Uniswap has hit some key metrics. If you remember our original announcement of an announcement which introduced wLEO, we said that our goal was to reach $100,000 in the liquidity pool within the first week or so.

Hitting that $100k figure is partially a psychological level (for people in DeFi/Uniswap) and also a very real target in terms of having the depth of liqudiity to handle a minimum trade amount.

Trading on Uniswap incurs gas fees - but those gas fees are for a fixed amount. Whether you trade $100 or $10,000, the fees are the same. This means that most successful Uniswap traders are trading in the $250+ range per trade to minimize the % of fees they pay.

When you look at low liquidity pairs, the slippage is too high to make even a $250 trade whorthwhile - let alone a $2,500 trade. Depth of liquidity is key and wLEO now has more liquidity than our community has ever witnessed. This kind of liquidity is simply not possible on Hive-Engine. Going to an exchange like Uniswap makes our token easy to trade - especially in larger quantities. 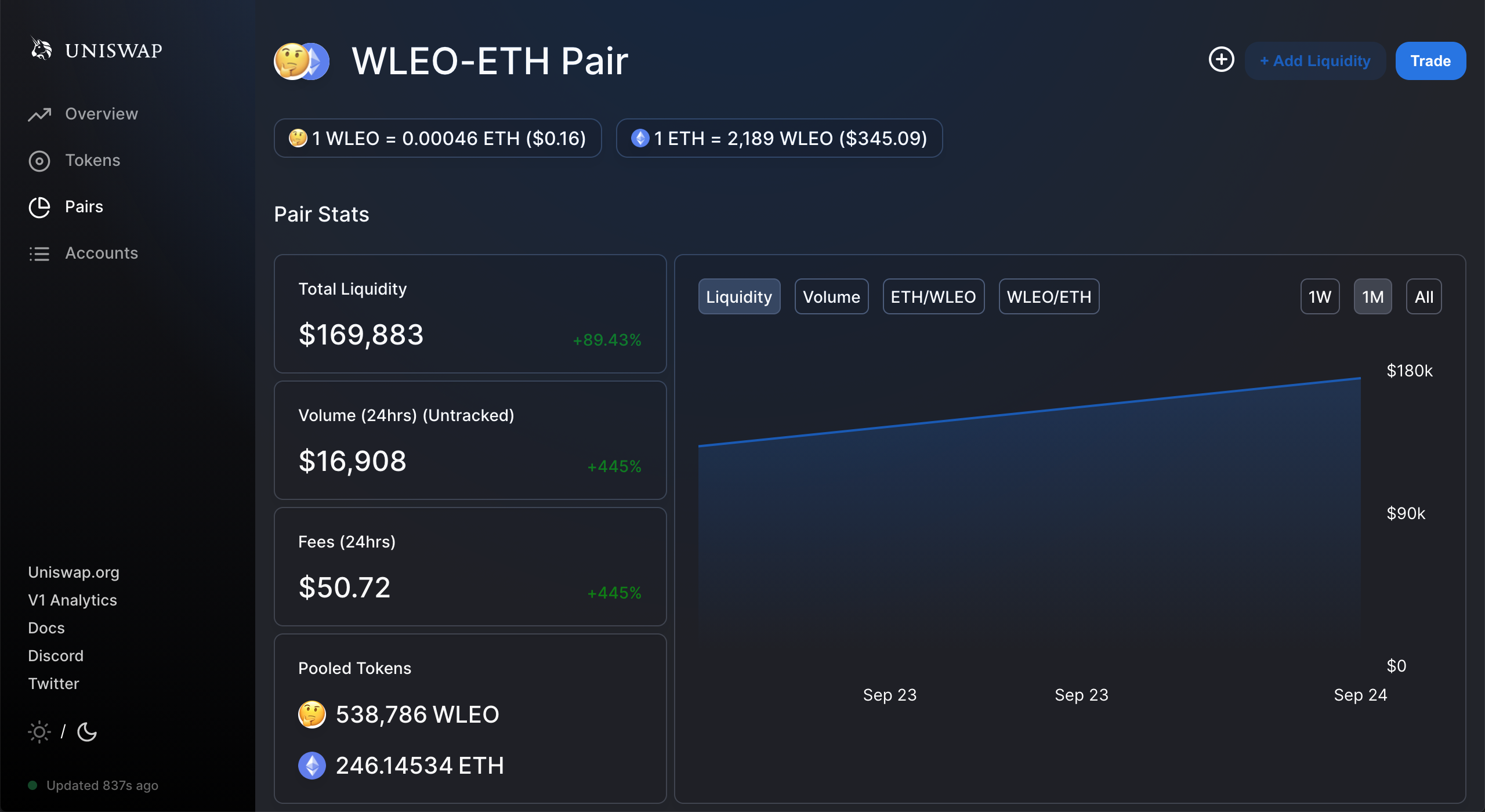 @nealmcspadden just dropped a message in chat that he's already earning about a 16-18% APR (and growing) from the trading fees alone. This doesn't include the 300,000 in LP incentives that we're releasing over the next 90 days to people who get into the pool early.

We're working on a leaderboard post for the LP incentives which will also explain exactly how that incentive structure works - since I know it is a bit complex.

Help wLEO Get Listed on Blockfolio!!

We need your votes on Blockfolio. If there is one major strength in the Hive community, it is rallying around a competition to get the most votes entered for something.

We just applied on Blockfolio to get wLEO listed as a trackable cryptocurrency. Please help us get listed by going to this link and voting for wLEO!!

If you drop a screenshot in a comment below this post, we'll send a small token of appreciation in the form of some LEO bounties to your Hive account.

UPDATE: We Did It! wLEO is Now Listed on Blockfolio!!

Just 20 minutes after publishing this post, we jumped to the top of Blockfolio's request page... You can see just how big our community is compared to most other small-cap crypto projects: 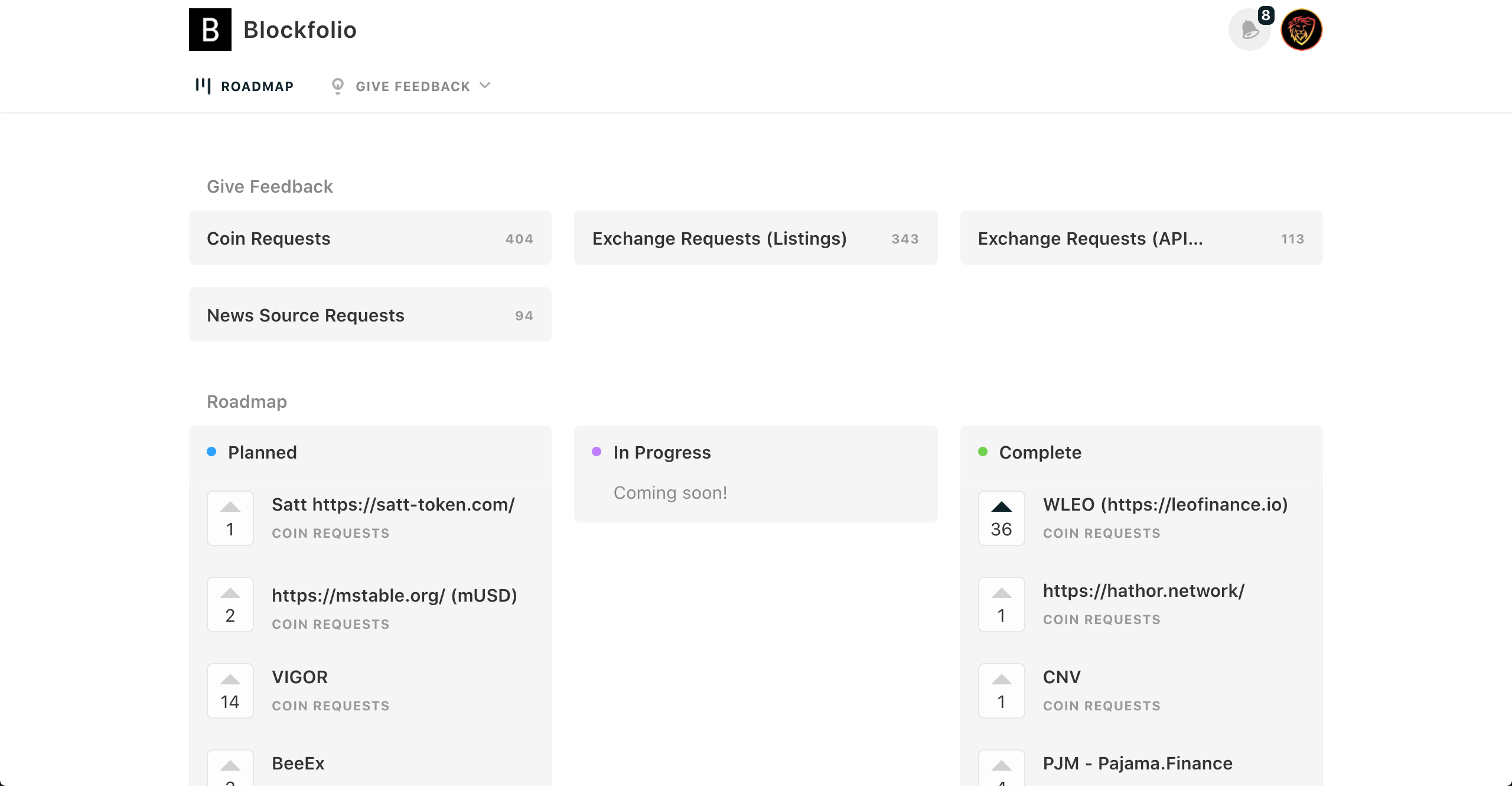 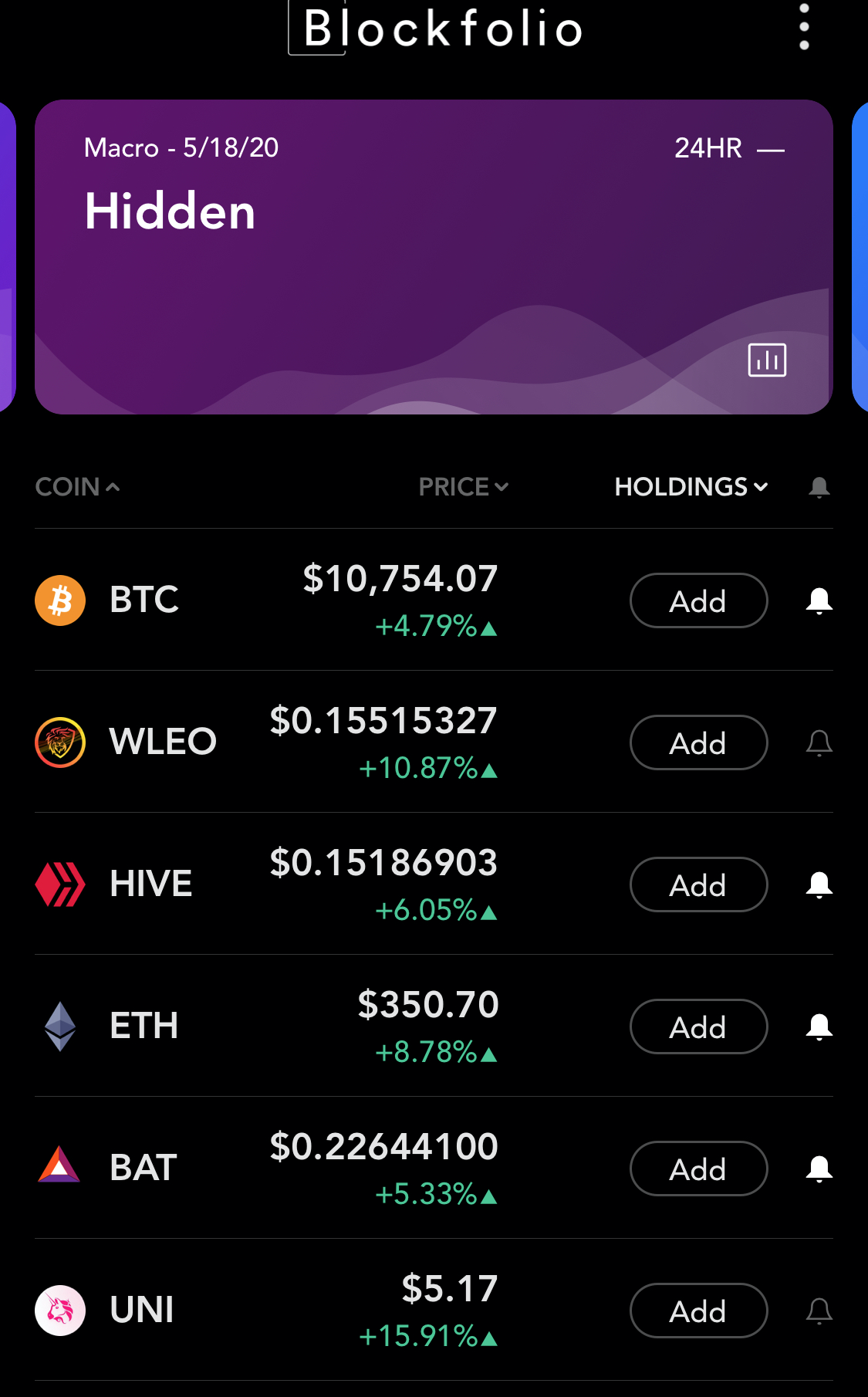 Bounty rewards will go out in a few hours :)

We've been chatting a lot in Discord and Telegram about the new dynamics of LeoFinance. Our community has taken the leap to greater heights as our token is now tradable on one of the largest exchanges in the world - Uniswap.

The key, however, is that wLEO is an ERC20 token. This means that it can be listed virtually anywhere because every crypto-based business or application accepts the ERC20 standard.

@trumpman has also taken the lead on getting wLEO listed on some other major DEXes. You can now trade wLEO on Mcafeedex and Bamboorelay.

As wLEO gains popularity (on Uniswap and elsewhere) the incoming traffic to our platform will drive more ad revenue and most importantly; new account signups.

We've already integrated Hiveonboard into our Beta blogging platform and an upcoming integration (next week) will blow your mind and potentially sign up hundreds, thousands and (our goal) tens of thousands of new Hive accounts in the months to come. 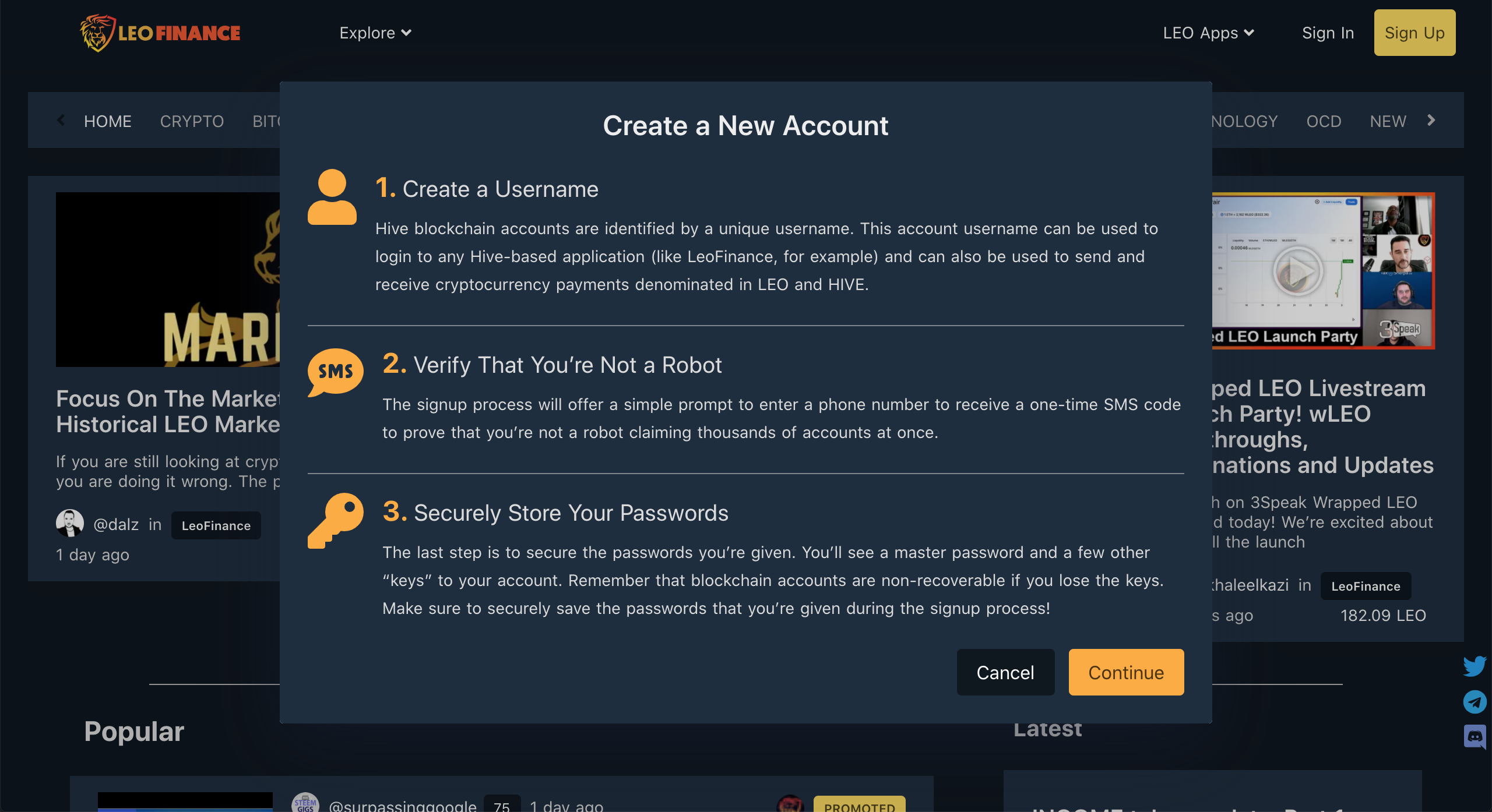 It's crazy to see how far our project has come in just 15 months. What will be even crazier is seeing our project reach greater heights in the next 15. Get ready for the ride of a lifetime 🚀