Who is @magnacarta and Why Is He Sending Me PIZZA? 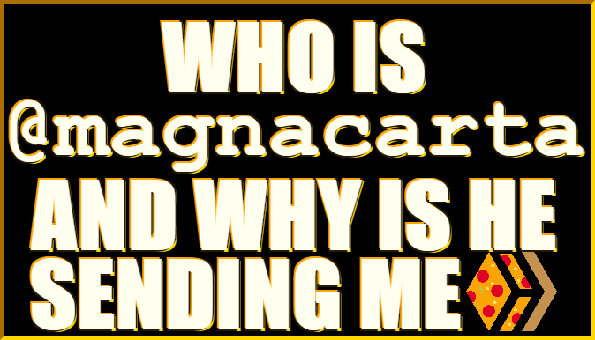 Usually I post and engage at LeoFinance, although on occasion I had posted or engaged at tribes such as Proof of Brain, CENT, ClickTrackProfit, and City of Neoxian.

Periodically I write posts as contributions to the Crypto Guides project ("@"crypto-guides) spearheaded by @forexbrokr. Sometimes I publish posts which are more like comments needing more space.

My main focus is cryptocurrencies from a number of angles (educational, commentary, observations, even pop culture). A secondary focus is sharing my discoveries about the world of Hive Social. There is so much available for us at Hive that I'm just scratching the surface with what I find, and new Hivers joining ever day can benefit immediately from things which took me a while to learn or discover.

OK, He's Active at LeoFinance. So How Come I Don't See Him?

Excellent question. I should be posting more regularly at LeoFiannce. At the moment I average 1 post per week, although I'm looking for niches which provide me ways to publish more posts more often.

Just as important, I should be engaging more than I have been. Despite recent unbelievable placements in the Hive Engagement League, that engagement has been super-concentrated in the Daily Crypto Markets Live Blog. Plenty of Leos and Hivers are publishing great content of all kinds; I've just been too focused on that one area.

As I go back to exploring the world outside the Daily Crypto Markets Live Blog I'll be doing so in a more disciplined and targeted way in order to round out my overall engagement development as a Hiver and as a Leo.

What's up with the PIZZA?

Although my upvote value has been steadily increasing, it's still a low value. I will upvote when I can, but for content which deserves an upvote but is older than 7 days I will offer slices of PIZZA tokens to make up for the upvote I couldn't give. A slice of PIZZA-- 0.1 units of a PIZZA pie-- may not be worth as much as my upvote depending on the front-end used, but it's worth more than my full upvote value on Day 8.

SEO has become a big deal at LeoFinance, so I've been looking to boost older content while linking to more recent content. If I find a post that looks good for SEO purposes, I will backlink to that post when I comment at the Daily Crypto Markets Live Blog. At the same time, I will comment on the older post I had promoted and leave a slice of PIZZA as a show of appreciation.

What Can We Expect of @magnacarta Going Forward?

It took a while, but think I've found my content niches. For now, I think these topics will keep me busy for a while:

After taking time off to work on a side-project plus the September 2021 Leomarkettalk Comment Giveaway, I'm ready to return to contributing to the Crypto Guides project. I announced my interest in a guide for HBD, but I may contribute to a Guide before that one.

My Layer 2 Token Project (Series Title To Be Determined)

Layer 2 tokens need more coverage than what they currently receive. Since Splinterlands put Hive on its back in mid-2021, I've discovered how underrated Layer 2 tokens are once we move away from the gaming tokens and the more famous tokens such as LEO and POB.

It was the big boost by Splinterlands which gave me the idea before 1 September 2021 to write about Layer 2 tokens to make people aware of them, Leos or not.

Before I can post about Layer 2 tokens, I need to finish compiling data I need from Hive Engine; it's the info accessed by clicking the blue "circled I" icon, and there's no easy way to access that information.

Once I have that data compiled in spreadsheet form, I need to make a front-end for that spreadsheet to make the quesries I want to make; these queries will form the basis for my posts about Layer 2 tokens.

These are just a few topics to be covered in the Layer 2 Token series:

Spreadsheets is why I joined Hive, and my first blog posts featured 8 ways to rewrite nested IF() functions. Given the spreadsheet I'm using for my Layer 2 token project, as well as seven days of LEO earnings as shown by my (meager) wallet, I should have plenty of posts I can publish combining spreadsheets with my Hive and LeoFinance experiences

This series will start small and build to end with a basic but complete searchable spreadsheet which anyone can modify to suit their own needs.

The "People in Crypto" Series

Originally begun at Proof of Brain with "Rocky Balboa, HODLer" as a way to combine crypto with pop culture and fiction, I will port earlier posts with updates and revisions to LeoFinance before I publish new posts in this series.

This series features individual characters such as Rocky Balboa and Quark from Star Trek: Deep Space Nine ("People in Crypto: The Special Case of Quark"). It also covers archetypes of the various people we find in crypto. The first archetype I covered was Pump-and-Dumpers"; in the pipeline are posts for 3 variations for the BUIDL archetype (mechanics, organizers, and financiers)

Partly as a way to discuss coins, partly to discuss copper, my earliest posts at LeoFinance were part of the "How Anyone Can Invest in Copper (No Brokerage Accounts Needed)" series.

1 post remains, but it will require lots of research and filtering since it will cover a number of demonetized coins with excellent copper or bronze content.

Sometimes I go down the rabbit hole as I comment, and this can be confirmed by the Leos who participate regularly at the Daily Crypto Markets Live Blog. Some of those comments deserve more space as posts to further develop points I wanted to make at the time. I won't do this regularly, but I will do this occasionally.

During my first few weeks on Hive but before posting at LeoFinance my content was essentially in a black hole; visibility was minimal to non-existent. I'm still grateful to the few people who had upvoted that content.

Most of these posts focus on spreadsheets, but I wrote about other topics as well. Knowing what I know now, I can update those posts with additional or different content (not to mention better images).

It could be about something I saw at LeoFinance, or a comment I thought was better as a post, or even a photo or a meme.

If you see the my name in your notifications and you normally don't see it there, there's a good chance I found a post of yours which I wanted to promote at the Daily Crypto Markets Live Blog. If I did that, I also left a slice of PIZZA along with my comment to your post as a stealthy way to upvote your post long after the 7-day eanings period.

Once I figure things out, I'll be posting multiple times each week and give readers content they can feel good about reading.