Well I decided to join in with @cadawg and mine some KOIN. I stole this picture from @edicted, but he gave me permission so its cool

The screenshot is from the GUI miner. I didn't go that route. I went with the CLI miner route because I didn't want to run it on my computer but instead on a server. For this, I'm using a Hetzner dedicated server with a AMD Ryzen 5 3600 6-Core Processor. 4 of those cores are on the VM dedicated to mining.

First thing I had to do was import setup the server.

Restart my connection to use latest version of nodejs.

Import in the key:

Follow the steps and save it to a file named key.key. You'll need to provide the private key to a wallet that you have funded with ETH in order to pay the fees.

The number 604800 is about how often you want to get a proof in seconds. Since eth has a fee to broadcast(I read someone had to pay about $5 to broadcast a proof) I wanted to make it do it once a week. You'll gain about the same amount sAince you'll just be getting harder proofs to solve. The 0 is the dev tip. If you don't want to tip them, leave it at 0.

Follow the steps to encrypt it and then boom. You've done it, you are mining KOINs. 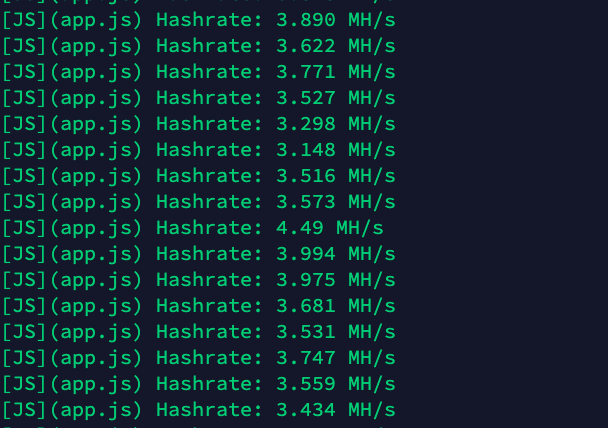 Theres other things going on in this server so the hashrate is lower than it can be. 100% of CPU usage isn't being used because some cores are dedicated towards my hive witness.

Then you'll see a screen with your hashrates. You can disconnect from the screen with Control + A + D and it'll still mine in the background.