Sometimes progress is seen by looking at the second layer. What do I mean by this?

There are many organizations out there that are trying to size up how big the cryptocurrency market is and how rapidly it is progressing. Since we do not know the number of individuals involved, there is a great deal of speculation.

Nevertheless, there are some ways to monitor what is taking place. One is to witness where tokens are starting to appear. With the expansion of the cryptocurrency industry in general, this is going to assist all of humanity down the road.

To start, let us look at the biggest one of them all, Bitcoin. This chart comes from an article posted by @globalcurrencies yesterday which shows how many Bitcoin wallets have a non-zero balance. 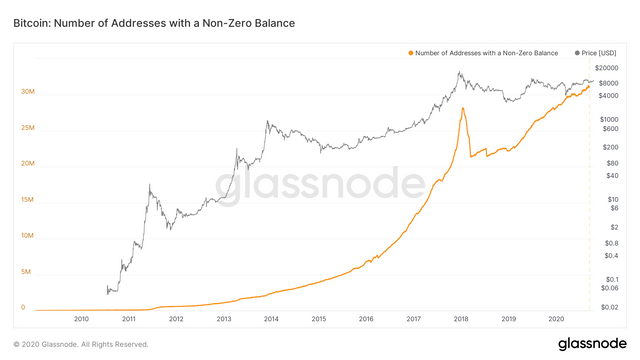 As we can see, there are 31 million wallets now with a non-zero balance of Bitcoin. The chart shows that, after a big drop during the 2018 collapse, the number of wallets has grown significantly over the past two years.

Another chart that shows similar, if not more exciting progress, is Ethereum. Here is what it looks like according to Etherscan.io.

As we can see, there is a tremendous growth in the number of wallets on Ethereum as well.

How Does This Benefit The Average Person?

Here is where things get very interesting.

We know that Bitcoin and Ethereum are the two most popular cryptocurrencies, at least as judged by their marketcap. That said, we know there are thousands of other currencies that are out there, all putting tokens in people's wallets. As time passes, people are seeing their holdings increase, in number terms.

The idea is to provide people with a basis in cryptocurrency from which they can build. DeFi is obviously offering something to people who are willing to get involved in that market. However, it is a bit shady as well as being risky. Many will not opt for this path.

So what is an individual to do?

This is where the maturation of the market is starting to provide legitimate options to people. Last week we saw a story about how a whisky distiller on the Faroe Islands was going to create an ERC-20 token to allow investors to get involved in ownership.

It is a project that comes on the heels of another whiskey based idea where money was raised from investors to buy 1,000 barrels of Kentucky whiskey. This was done through a financial entity, thus going to "accredited investors" whereas the one on Faroe Islands does not appear to be that way. It does utilize KYC and AML, but appears to be open to anyone willing to provide that information.

Another interesting project is set to go live next month is in the gaming world. Atari, one of the biggest names in gaming is creating a token that allows for individuals to make purchases in game. The company is set to dole out $1 million in tokens which can be utilized on their newest gaming console. It appears this will only be for purchases with no word given if the token can be earned by playing the games.

The final project that I want to point is out an idea that really excites me. The subject matter isn't what is important at this moment. Rather, it is the concept that can open doors for millions of people. 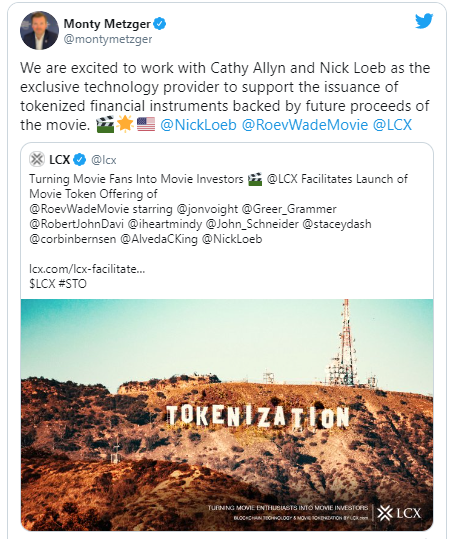 There is a film being produced called "Roe V. Wade" that is now going to be tokenized. It will allow individuals who are interested to invest in the film for a share of the potential profits.

It is an exciting step in a move towards decentralization and breaking up the monopoly that the present financial players have.

Here is what the producer had to say:

Tokenization via blockchain technology is democratizing investing and will revolutionize how Hollywood will engage with their audience.

Certainly feature films can make a lot of money. They can also lose money too. This is where the risk comes in. However, tokenization opens up the doors for millions of people to be financially involved in an industry that has generated enormous wealth.

While we are only seeing a handful of projects at this time, what happens when there are dozens in each industry? An individual could spread his or her "movie" investment across 6 or 9 projects, putting a bit into each in an effort to seek a return.

At the same time, the amounts from each do not have to be great. Consider having to raise $50 million for a film. If there were 20 million crypto holders willing to invest, that is an average of $2.50 apiece.

This is the power of fractional ownership.

It is also one of the reasons why I believe Hive will become an extremely successful blockchain. One thing that Hive excels at is the distribution of tokens. In addition to the base layer, we are now seeing second layer tokens getting some attention. The success of LEO has stimulated the community to take another look at the value of this layer.

Ultimately, with growth, people will be receiving tokens for their actions. The one drawback to Bitcoin and Ethereum is they, for the most part, require people to spend money to acquire them. Since most of the world does not have any excess capital, this cuts them off from participating.

Yet on Hive, everyone has the opportunity to see their wallets grow. As more activity takes place, one receives more rewards. Certainly, there will be some variety as to which tokens are received, but the option exists to convert them.

Now we are starting to see other options appearing that people can take advantage of. Over the next few years, as development keeps rolling out, we should see all numbers growing. This means that more people will have some money to invest in things that interest them.

It only makes sense that those looking to raise funds will target crypto holders. If the entire industry starts getting into the trillions of dollars, that will be too much to overlook. Thousands of different projects will have the opportunity at funding while presenting everyday Johns and Janes with the chance to get involved in something profitable.

Eventually the use cases will be such that they rival the existing system. Just like one does not have to search very much to find a use for the USD, we are rapidly approaching the point where the same holds true for some of the tokens (like BTC and ETH). Over time, this should spread.

At some point, investing will not only be something for the wealthy but, basically, everyone who operates online.