Hive #1 Blockchain For Gaming And Another Big Gaming Announcement

As most probably read by now, Hive passed EOS as the #1 blockchain for gaming. This is according to dappradar.com.

That entity released its monthly report for August and it looks like Hive ascended to the top of the blockchain space for gaming transactions. This was previously held by EOS, which saw fall off from some of its games. The method of analysis is based upon the number of wallets that are gaming. 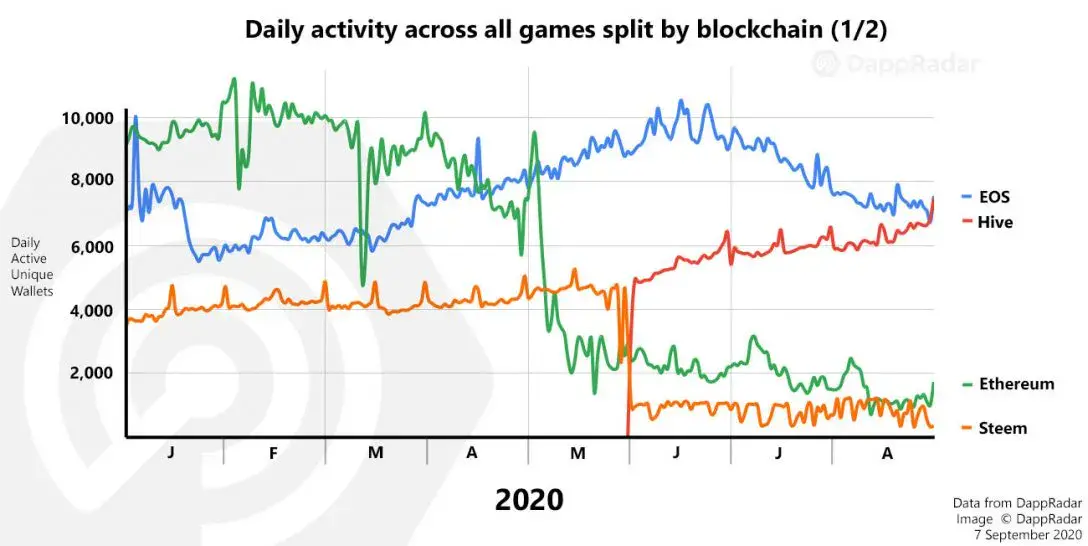 The big winner continues to be Splinterlands which, according to the report, saw more than 50% growth since the beginning of the year. 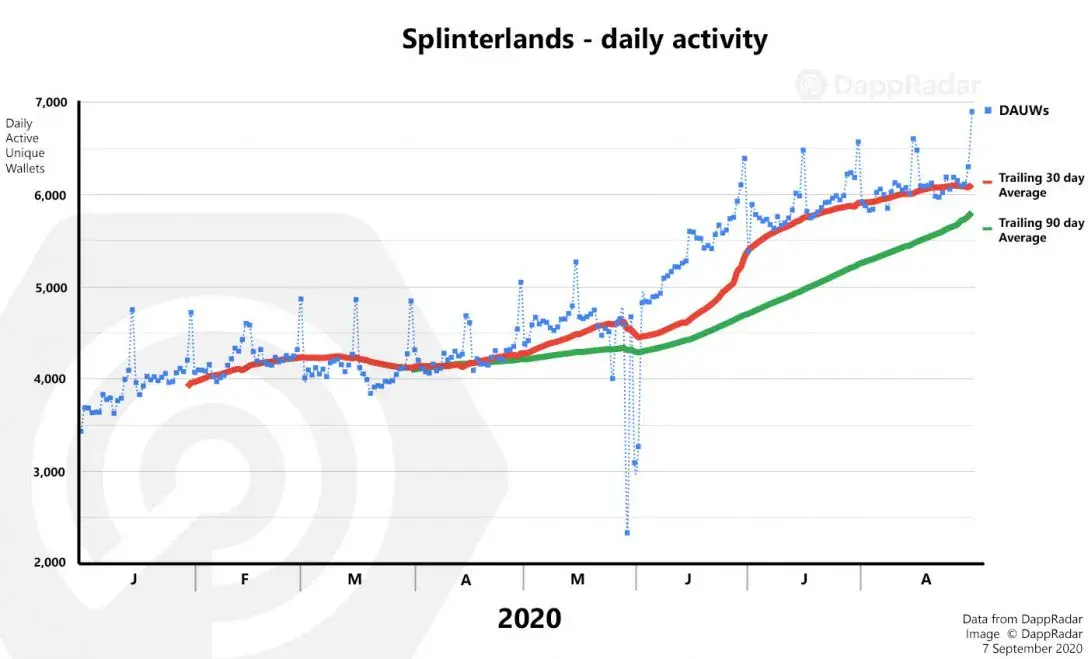 The result is Splinterlands has experienced month-on-month growth throughout 2020, rising from around under 4,000 daily active unique wallets in January to over 6,100 in August.

It’s been the most popular blockchain game since early June.

The full report can be read here or you can watch this video they put together.

This actually aligns what much of what we see taking place on Hive. On the same day as that report was released, @dalz put together his monthly post regarding the type of transactions we see being conducted on Hive. This shows all the activity and breaks it down by category.

As we can see from the data on the following chart, for a blockchain that was constructed for blogging, a shift took place where custom JSON transactions started to dominate. Naturally, Splinterlands feeds into this being the most popular blockchain game with the most wallets interacting. With a few more games in Beta, I would expect we can see this will grow even more. Blockchain gaming is only going to get bigger. This is not true for Hive but the industry in general. There was another bit of news that came out which is applicable to this discussion. In fact, it could be part of the conversation of moving digital assets towards mainstream adoption.

Minecraft is one of the most popular games around, It is played by more than 100 million people each month. It also has incredible growth over the last 5 years. Here is a chart showing the rate since 2015. They total is not around 130 million players. The image cut off the numbers since it is only available via pay service.

Minecraft will be entering the NFT business. This is no surprise since that type of token is ideal for gaming. It is, however, not being done by the company itself but, rather, a couple of entities that got together.

The Japanese exchange, Coincheck, is utilizing a plugin designed by EngineCraft which can be used on Minecraft servers. This will enable for assets within the game to be tokenized into a NFT and be traded on Coincheck's NFT marketplace.

Here is the link to the full article:

This is enormous news. Depending upon the numbers one goes by, there are between 50 million and 100 million people who are involved in cryptocurrency. It is hard to tell exactly what the true numbers are since most research deals in wallets. As we know duplication can be a problem in this area since many people have multiple Ethereum, as an example, wallets.

Nevertheless, whatever the correct number is, a game like Minecraft having digital assets that are backed by NFTs is a major step. With a monthly player base of 130 million, this could potentially double the number of people who are involved in cryptocurrency. In the long run, this could be an enormous feeder system for the entire industry.

Part of the challenge with cryptocurrency is the fact that it is so much different than what people are accustomed to. Keys are a nightmare for people who never dealt in them. At the same time, getting involved with exchanges is something that many do not have experience with. While the tools available to people are improving, it is still something of a different magnitude altogether. There is still a bit of technical expertise that is required.

That said, gaming being tied to blockchain is about to get a huge jump. Certainly, this is a big difference than Minecraft linking its game to blockhain yet it is a start. The NFT market is expected to explode as the big gaming producers get involved. Here we see an example where it wasn't even those behind the game who made the decision. It depicts how innovation coming from individuals even when a structure (game in this case) is centralized.

A move like this will only open the door wider for games that are already existing on blockchain. At this point, it is safe to say the lack of familiarity is a major barrier to overcome for the crypto industry. This is something that a move like this can alleviate. As people get more comfortable with the concept of NFTs and how to utilize them, this will open them up to other options.

We are involved in a numbers game. When a move within the industry has the opportunity to access more than 100 million people, that is a step in the right direction. Certainly, not all players are going to get involved with the NFTs on the marketplace, yet a certain percentage will. And, of those people, there will be an amount who look to spread their wings even further.

In the end, it might only be 10% of the total Minecraft user base over time, a number that that certain kicks the crypto industry users up.

One of the major benefits to Hive gaming is there are no direct transaction fees. The Dappradar report detailed how Ethereum saw a major drop in its gaming wallets, likely due to the high fees at the moment. EOS can also have this problem.

Hive is immune from this. As long as users have a bit of RC to power the Custom JSON, they are good to go. This only requires a bit of HP.

This might be what attracts some game developers to Hive. Who wants to develop a game only to lose users due to the fact that it costs a fortune to simply interact during the game?

We are watching a transition taking place right before our eyes.