For about two years, I did a monthly report on Steem called "STEEM: Whales Are Losing Their Power....The System Is Not Broken". This took a look at how the distribution of Steem Power changed on a monthly basis. The presumption on there was that the Whales were just getting more powerful when the reality showed the exact opposite. When it came to Steem Power, over a two years period of time, things were flattening out.

Of course, we know that Steemit Inc selling part of the stake each month had a lot to do with it. Unfortunately, as we found out, not enough was sold.

I decided to bring this report over to Hive so that we can monitor how things are going. I am going to use the first chart I have from Steem as the initial basis since Hive has its roots there. The chart is pertinent for all categories other than the Whales since we know that is much different than on Hive due to Steemit Inc.

Each month I monitor what is going on with new accounts and the amount of MVests in each category. I do this to determine what trends are taking place.

Now that we are at end of month, time to post the numbers again.

I want to thank @arcange for the work done each day compiling these numbers and making the charts.

We will be showing 3 months worth of data for analysis purposes to see how the 90 trend might be.

The first chart is from August of 2017, the month I started on Steem. It is placed here to provide some contrast to see how things are changing over a longer period of time.

Here is the breakdown. 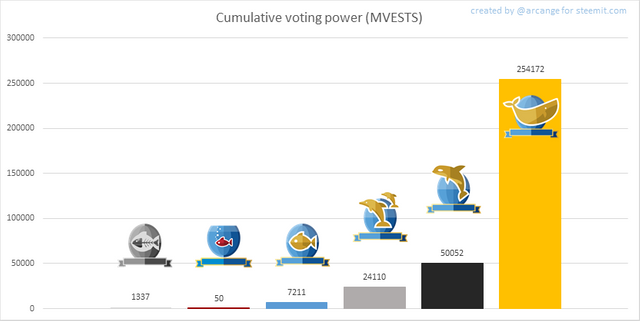 This month certainly saw a couple of situations taking place that could be affecting the Hive Power distribution.

The first was that a Whale made a huge move, powering up over 1 million HIVE (it might have been done twice). This really tilted things in the favor of the Whales. As we can see from the number of accounts, they added 2 more Whales this month.

At the next level, the Orcas added accounts but lost in total MVests. This is not surprising since the number of accounts did not come close to replacing what was lost. With a net gain of 4 accounts, this will not offset losing two to "graduation".

Another event that took place was the popularity of wLEO. With the introduction of that project, it is possible that many accounts, especially smaller ones, used Hive to acquire LEO and participate in the Liquidity Pool on Ethereum. At the same time, even if one did not opt for that path, many were purchasing LEO from Hive-Engine, broadcasting a destination for one's HIVE.

This could be a situation that we see ongoing. As user get more options with their HIVE other than selling or powering up, they could find paths to better returns in those other areas. We could see things reverse if there are some serious paydays arriving from some of the layer 2 applications.

Here is something that we can monitor going forward. We can now see people who have more in their Hive-Engine accounts than they do in Hive.