Jack Dorsey Is Wrong: Bitcoin Will Not Be The Native Currency Of The Internet

Jack Dorsey is certainly a proponent of cryptocurrency and Bitcoin in particular. Herein can lie the problem with how things are viewed. Overall, Dorsey does appear to be a bit of a maximalist when it comes to the potential of Bitcoin.

While we can debate price forecasts all we want, what is clear is that, for the last decade, Bitcoin was one of the best performers in the world for the return provided. Many believe this trend will continue. On this point, I will not debate. Markets can do some interesting things and a big Bitcoin price is, in my opinion, not to be ignored.

The challenge that people who are making assertions like Dorsey is they are omitting what is taking place. Watching markets tells us all we need to know. This tends to move things from opinion to fact.

Bitcoin is known for its hodlers. This right here tells us how people view it. The idea of transacting in it really does not appeal to most people. 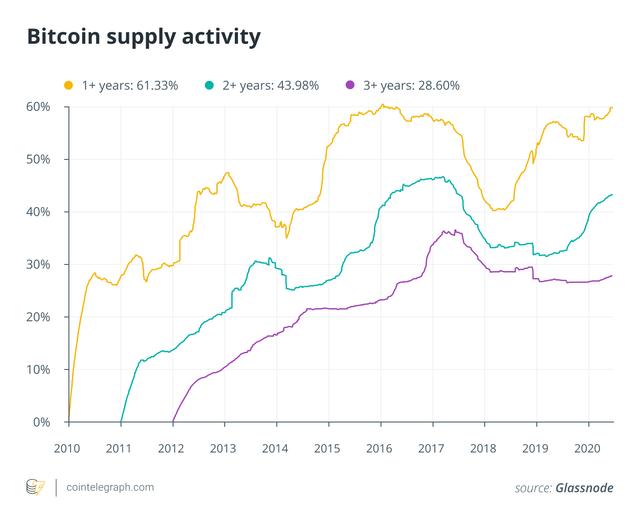 Do you think you can find these rates in any other currency that is used for payments? Imagine 60% of the USD, JPY, or EUR not moving in over a year? Talk about the velocity of money coming to a screeching halt.

Of course, if you are a holder of Bitcoin, go through this scenario yourself:

You are in desperate need of a car, so you head to the local dealership to look at an Accord. The car is $25,000, something that you cannot afford to buy since you have no money. There is also the problem that your identity was stolen, thus your credit is shot.

Fortunately, the dealership works with a bank that will subprime you for a whopping 11% interest rate. While the rate is awful, you can afford the payment.

Suddenly, you see a sign that says "We accept Bitcoin". This could be your lucky day. You just so happen to have 2.5 BTC, worth the price of the car in your wallet.

Do you take the financing for 7 years at the onerous rate or give up your Bitcoin?

Most would opt for the loan on the car for a simple reason: the history of Bitcoin shows that the price will be higher in 5 years. Let us, for a moment, presume, $20K BTC over that time. Certainly, this is not an outrageous forecast.

And here is where we go one step further. If you do decide to sell your 2.5 BTC in 5 years, do you think the person buying it is doing that to go out and purchase an Audi? Or do you think they have the idea that it will be worth $75K or $100K further down the line?

Obviously, it is the later.

Bitcoin has a fixed limit of 21 million coins. Many feel this is a good thing, the sound money thing after all. Of course, what they do not realize is this is awful for an economy. Money is required for transactions and the velocity of money is vital to economic growth.

Consider the above example. If the Honda Accord at $25,000 will not get you to give up your Bitcoin, what price will? Would you pay 1 BTC for the car? Thus, paying $10,000 instead of the previous price? Perhaps if you only thought that BTC would double in price.

However, this is a conservative estimate compared to the Stock-To-Flow model.

This model, which thus far, has proven remarkably accurate, has Bitcoin on its way from $100K to $1M by 2025. Just think about that for a second and how it changes the appeal of using it to buy a car.

I would forecast that people would need a huge discount to fork over their BTC. Thus, prices for everything would collapse 70% or more.

Bitcoin is now 11 years old. The network, while a revolutionary idea, is outdated. When it comes to transferring value, there are much better options out there today. Bitcoin is slow and expensive. Of course, compared to the SWIFT network, it is still amazingly fast. However, when we look at other options, we see much faster and less expensive choices.

Most of the development being done on the Bitcoin network is simply trying to make it a more efficient transfer of value system. They realize it cannot compete when it comes to sending money from point A to point B.

I think Vitalik also had it correct when he said people will get tired of Bitcoin. If I am reading his view correctly, the interesting development is not taking place on Bitcoin. There are many other blockchains with more interesting projects that will attract users. Bitcoin simply is not in that category.

People are tribal in their nature. We tend to assemble based upon different needs. For most of human history, this was based upon geography. Since our world was mostly physical, that was the realm we operated on.

The last few decades saw that change. With the introduction of the Internet, we moved into the virtual world. Now people can assemble based upon topics, likes, and a host of other parameters. The physical closeness is not required.

With cryptocurrency, the assembly is compounded by the ability to create an economy. Whatever the reason for getting together, that can be tokenized and individuals can interact in a financial capacity with each other.

As we keep decentralizing our interactions, why would we have just one native currency? The truth is we are already seeing a different mindset forming. For example, those who operate on Hive see what everything is priced in. When dealing with other tokens tied to that chain, it is all priced in the native token to that group (blockchain).

Over time, we will see the main users on Ethereum, EOS, Tron, and Cardano do the same thing. Their transactions will be based upon the tokens they are familiar with.

In fact, we see that in the world today. The USD is the reserve currency and can be traded for any other major currency. That said, do you think that the average person in the EU knows, or cares, what the EUR/USD rate is. Unless they are looking to travel, they have no clue. There is a simple reason for this: their daily lives are priced in EUR.

Advancements in crypto wallets will also make this a moot point. As wallets start to instantly swap one token for another, the joining of what is held versus what is needed to pay is bridged. There will be no need to go to a standardized currency to be able to interact. The wallets will seamlessly do this in a peer-to-peer manner.

All the reasons that work against Bitcoin as a means of a payment system actually work for it as "digital gold". With us entering a more digitized world, it only makes sense that stores of value will start to operate in that realm.

Once again, the Stock-To-Flow model tells the story. Bitcoin has a built in scarcity. While this is a drawback to economic growth, it is an asset for value appreciation. Even if the model misses by 50%, we still will see some terrific gains over the rest of the decade.

We also have the Millennials. They are, according to the few surveys I read, preferring BTC to gold by a margin of 9-1. This is a group that is forecast to inherit roughly $70 trillion over the next 10-15 years.

The Baby Boomers are many of your gold advocates. With the Millennials starting to take over, as they enter their prime earning years, we can see where the shift is going to take place. With the passing of each Boomer, we see their customer base shrinking.

For this reason, I cannot contest the idea that everyone should be holding at least some Bitcoin. The historic returns are outstanding while the forecasts going forward, even on the conservative end, will provide stellar returns.

As bullish as I am on BTC from a pricing perspective, I simply do not see it as the native currency of the Internet. That idea makes little sense as we move into an automated, decentralized, and digital world.

What are your thoughts?