Rabona: Millions Of Game Sold In That Field

Recently we saw the introduction of a new game on Hive called Rabona. It is a Football Manager game where it enables one to handle all operations of a Football (Soccer) Club. This is a rather novel concept when applied to cryptocurrency as we will see in a moment.

Not being a gamer, this struck me as a rather unique proposition. That said, it is not without an existing market.

The Football Manager pool is rather large. While it will not rival something like Fortnight, it does have a vast amount of users globally. This could really be a nice target market when the Rabona team is ready to expand their reach. Presently the game is in beta, so the finer points of the game are being tested and worked out. It is closed meaning by invite only. According to their last post, they will be adding another 10 or so testers in a week. Thus, if interested, perhaps contact the Rabona team and get on the list.

What is noteworthy is that there is a long tradition in a game such as this. It dates back to 1993 when a couple of developers out of England introduced Championship Manager to the world.

There was another game that dates back into the early 80s called Football Manager. This was one of the more successful games, spawning many follow-up versions. The claim was that it sold over a million copies before fading in the early 1990s.

When the split occurred with Championship Manager, the team that held the rights to the database released another version of Football Manager. This has gone onto many updates and global success. The game was released in conjunction with Sega.

COVID-19 shut down sporting events across the world. Even now that many sports are back in action, they are doing so without fans in the stands. When this will change is anyone's guess. It is likely this extends into next year meaning most sports will have two seasons interrupted.

During the lockdowns, which are still going on in many areas, people turned to different games. Football Manager was one that started to set records for the franchise. In short, 2020 was a glorious year.

The online version saw near 90,000 people playing the game at the same time on Steam. 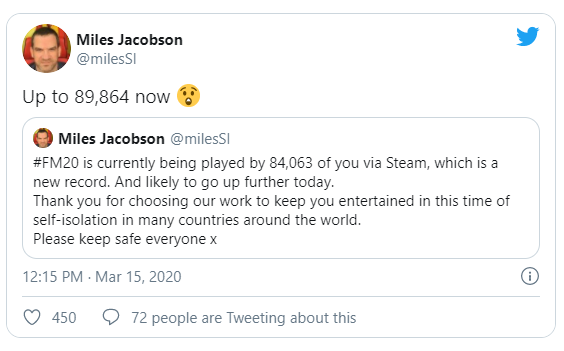 How big is this market?

The 2019 version of Football Manager sold over 2 million copies. Obviously, there are no numbers being reported for 2020 yet but the expectation is that it will grow again.

So how does all this play into Rabona?

To start, it is always good to have a market when bringing out something new. It is obvious that millions around the world enjoy this type of game. Up until now, I would presume that players engaged simply for the enjoyment of the game as well as the competition that it fosters. Certainly, there are likely to be tournaments where people could win prizes and other goodies.

However, this does not compare to what Rabona is doing?

Quite simply, being tied to blockchain, turns one from a player to an owner. Being in charge of the entire Football enterprise means one is actually, through the game, running a business. This virtual business will pay out in cryptocurrency (combination of HIVE and RBN). This creates the opportunity for players to financially benefit while playing a game they truly enjoy.

Of course, since I am not a beta tester, I cannot validate the layout of the game or what features it offers. I would believe that, over time, more will be added which will close the gap with some of the mainstream games.

The undiscovered piece to this, actually to all online gaming, is the non-fungible token (NFT). We could see a NFT issued for each team that is constructed. This would provide game players with a true asset that might be sold. Of course, the better one is at managing his or her team, the more value it would carry.

A couple millions players might not sound like a lot in the online gaming world and, truthfully, it is not. However, when we look at blockchain gaming, still in its early infancy, we see that Splinterlands consistently ranks at the top with 5,000 or 6,000 MAU.

Could Rabona peel off a fraction of those 2M people buying Football Manager each year? Time will tell on that one but the fact there is a market is a good beginning. To attain a great deal of success in blockchain, grabbing even 10,000 would put one at the top of the list.

In this instance, it seems like a simple decision for users. Naturally, the quality of Rabona compared to the other games is going to be vital. While it is unfair to expect a newcomer to rival a decades old game with a 20 different versions, over time, it is crucial that there be some comparison. Players will not put up with a product that is substantially lower in quality for long.

The fact that they can get compensated for their efforts takes things to an entirely new level. Are we starting to see the start of a new career path: owner of virtual businesses in games?

What we know at this time is the gaming industry is getting reading for some major changes.