The Accelerating Rate Of Economic Growth

Many had a difficult time wrapping their heads around some of the numbers that are out there. As we get older, this becomes even more of an issue.

Technology is changing everything. We are living in an era where there is an accelerating rate of change. Many industries are being disrupted and multi-billion dollar companies seemingly appear overnight. Some companies are now valued in the trillions, reaching billions of customers globally.

In short, we are in a different world as compared to a few decades ago. What is scary to many is we will likely see another change in the next 15-20 years. Technology keeps increasing the pace of its impact.

We can see how this is the case with cryptocurrency. This industry, compared to where it was 5 years ago, is radically different. Because of this, the expansion is at a larger pace than it was before. We also should not expect things to slow down anytime soon. 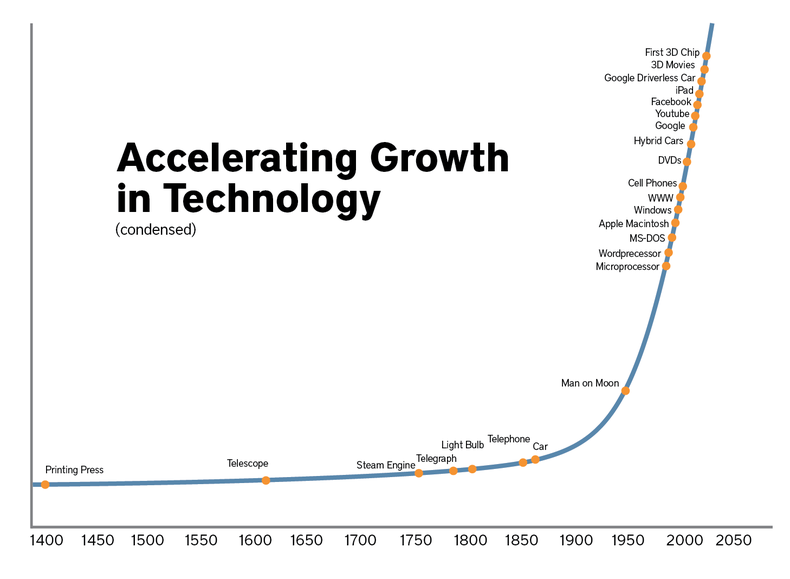 The Accelerating Rate Of Economic Growth

This is something few focus upon. Technology is not only having an impact on how society operates, it is also changing things economically. We saw enormous growth over the last 20 years in this area, something that will also continue as we head further into the digital world.

As an example, we can look at something that is at the core of this advancement. The semiconductor is a vital part of our existence. In fact, the recent chip shortage has caused negative economic impact to many companies. Nevertheless, this is a temporary condition that will be resolved in the next couple years.

Here is a chart of the number of units that were shipped. Please note they are in billions.

This is a high stakes game. At present, we are looking at roughly $45 billion being spent on 4 semiconductor plants that will be going into the United States. The goal is for them to come online in 2023-2024. We can expect billions of chips to come out of these plants.

Obviously this is a vital industry when it comes to the digital world. It is also part of an ongoing trend of accelerating economic growth.

This is a concept that was studied and mapped out by economists.

To start, we have the rate of the entire planet. 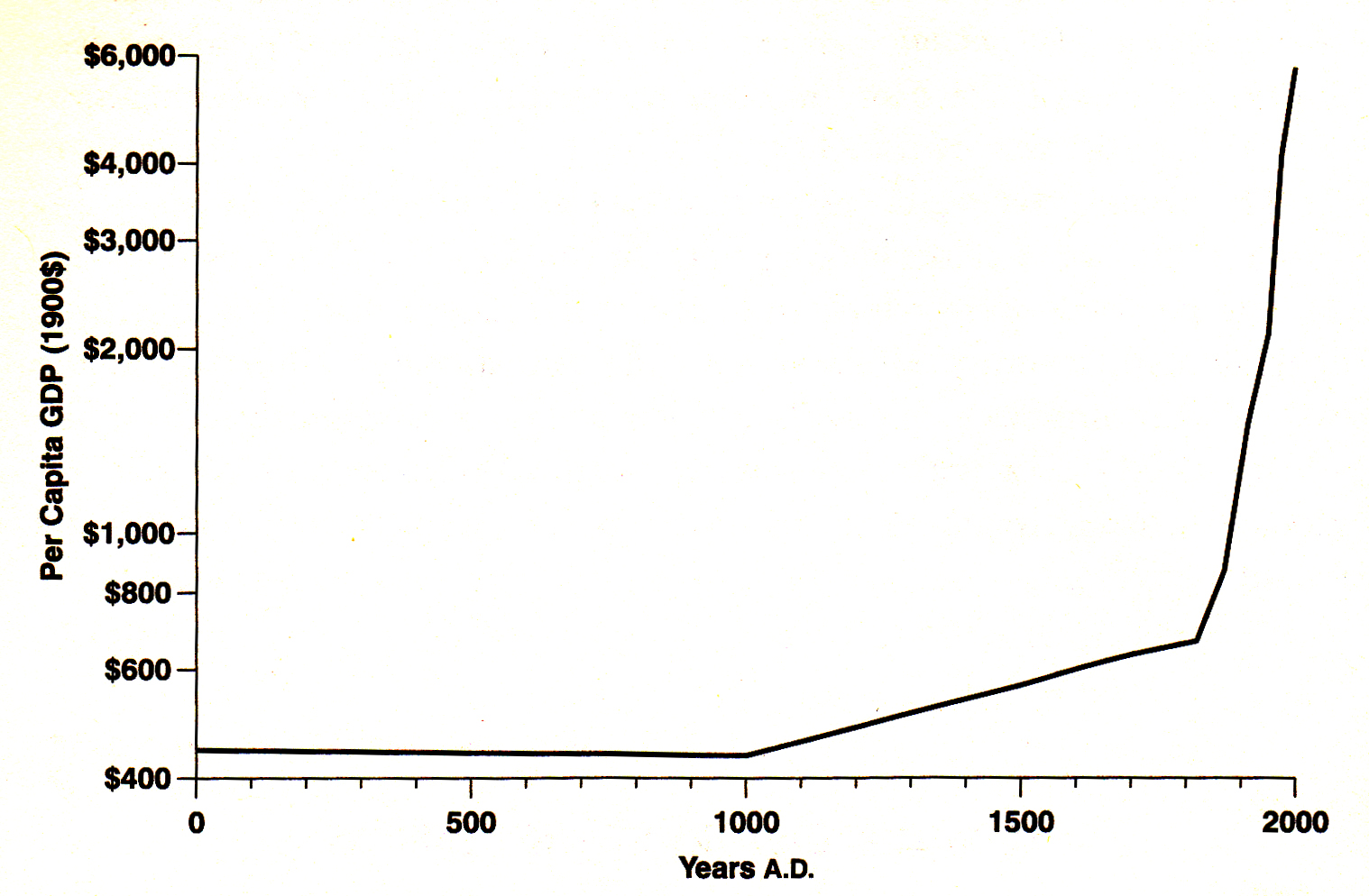 As we can see, for centuries there was very little change. Then we saw an steady increase when global trade came into being. Of course, the last couple hundred years, thanks to the Industrial Revolution, saw massive gains.

If we focus upon the United States, we see a steady pattern over couple hundred years. 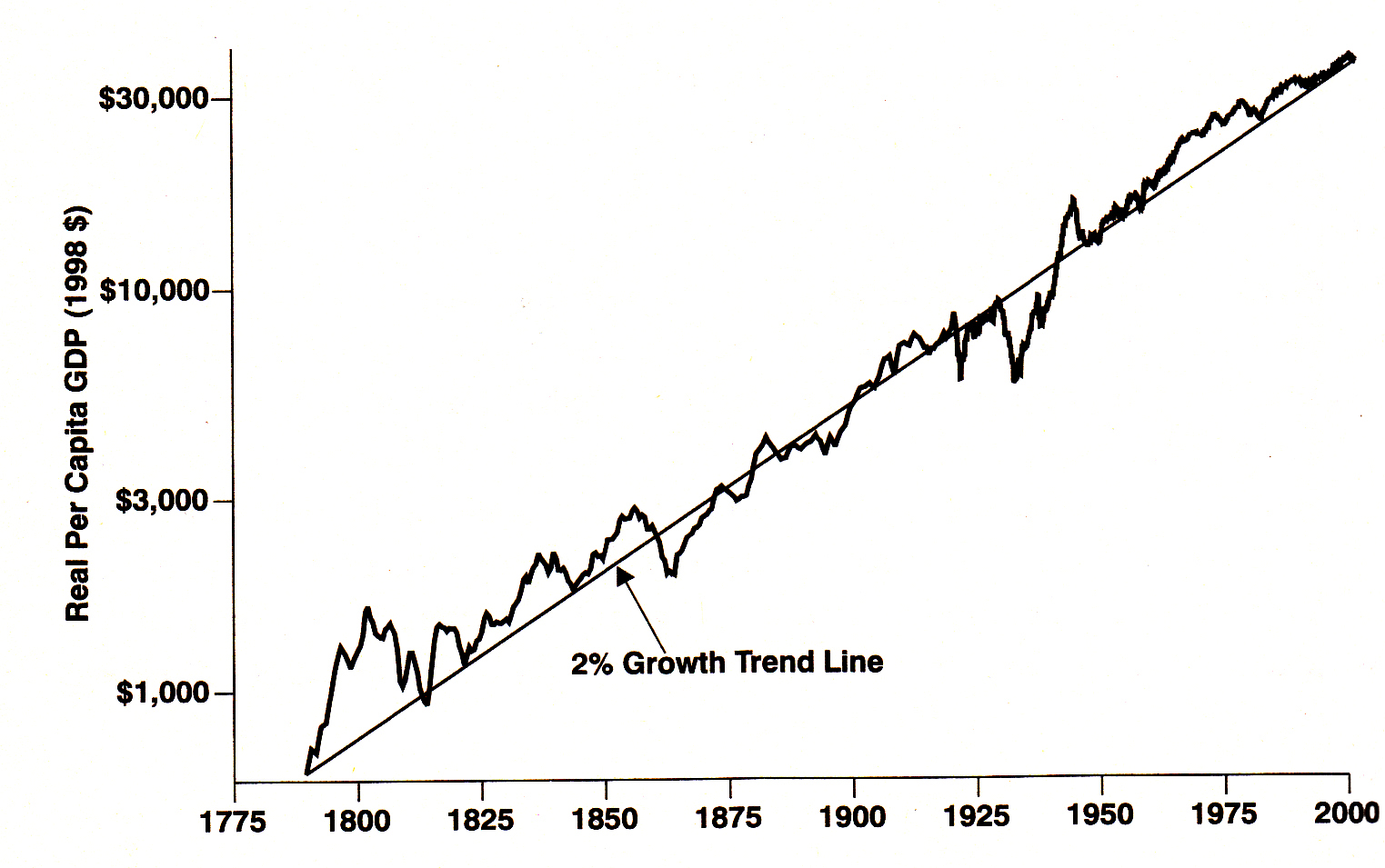 What this chart does not show, since it only goes 1998, is what happened in the ensuing years.

The steady progress of seeing a tripling every 50 years accelerated as we delved deeper into the digital age.

As we can see, over the last 20+ years, the number went from $32K to just shy of $64K. That means almost half the economic output was created in the last couple decades. 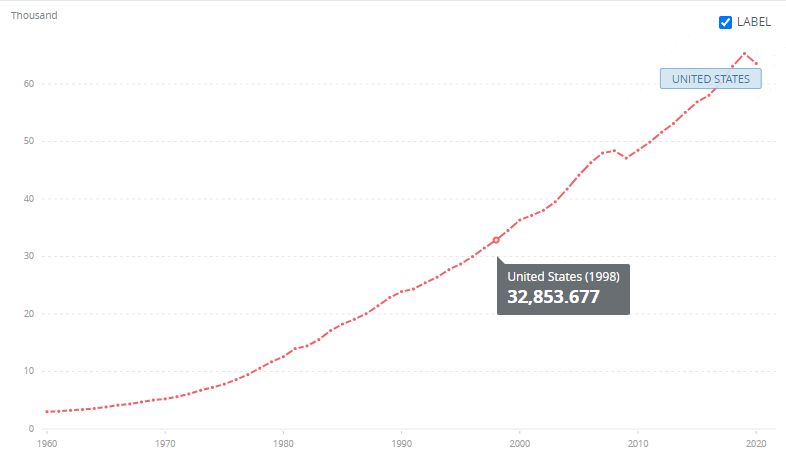 Of course, this makes sense when we consider the concept of automation. There is little doubt that an industry like automobile manufacturing can churn out more cars using robotics as compared to what they could do in the 1970s and 1980s.

It is no coincidence that the most valuable companies in the world are those that are involved, to a large degree, with the Internet. When we look at Apple, Amazon, Facebook, and Google, we see how the network effects produce enormous revenues. They are also highly profitable.

The shift from atoms to bits is also accelerating. We saw a lot of application creation since the introduction of the smartphone. This is going to continue as blockchain becomes a larger part of the picture.

We see this technology bringing a new model of digital ownership to the table. This is going to unleash economic activity that was not possible before. Again, many on the outside will look at some of the valuations and not grasp them. How can cryptocurrency become worth hundreds of trillions of dollars (even into the quadrillions)? When we consider the pace of change, it brings it into focus.

History shows us that technological progress brings about massive economic progress. That is what these charts show. It no surprise that the world was rather static economically before the Industrial Revolution. We were basically dealing with an agrarian, human-powered world. This changed with the introduction of machines on a mass scale. Of course, now we are dealing with the advancement of digitization which is pushing things forward at a greater pace.

Cryptocurrency is going to spur on incredible economic growth. This is because we are pulling more people globally into the fold. We have around 5.1 billion people online at present, a number that will expand to more than 7 billion in the next few years.

When we step back, we see progress on every level. Our communication systems are getting more robust. The speed of our computers is increasing. People are developing more applications, thus attracting more users. More transactions are being created since systems can handle more.

All of this directly impacts the economic growth rates. This is why millionaires turned into billionaires. The next step is we will see trillionaires.

Of course, wealth distribution is something that we did not excel at. This is where cryptocurrency could play a major role. As more people get involved, the network effects increase the value of everyone's holdings. If ownership is keeps moving toward wide spread distribution, then we will see this situation alleviated a bit. There will always be those who excel more than others. However, the totality can be improved by giving the lower rungs the opportunity to move upward.

For those who step back to look at things, we can see that the next 20 years will reflect what took place in the previous. The only difference is that it will outpace what occurred since we are dealing with acceleration. This means we might see a doubling in the numbers in the next 15 instead of 20. It simply how technology operates.

Few take the time to understand how rapidly advancing technological progress is affecting our economic situation. What we can clearly see is the two go hand-in-hand.

Therefore, we can expect the acceleration of both to continue. This is what is changing the field of economics completely.