The Stages Of The Death Of The Mall

Few things die overnight. In the world of business, there is usually a process.

For the shopping mall, this was occurring for sometime. Since the rise of online shopping, malls started to get his as more of their tenants were faced with declining sales, many ending up in bankruptcy.

This has caused a spillover to the mall owners. As flagship stores went under, many smaller tenants were able to exercise clauses which allowed them to leave. Those that remained saw the foot traffic decline, placing further stress on those companies.

Here is the process that the B malls go through. 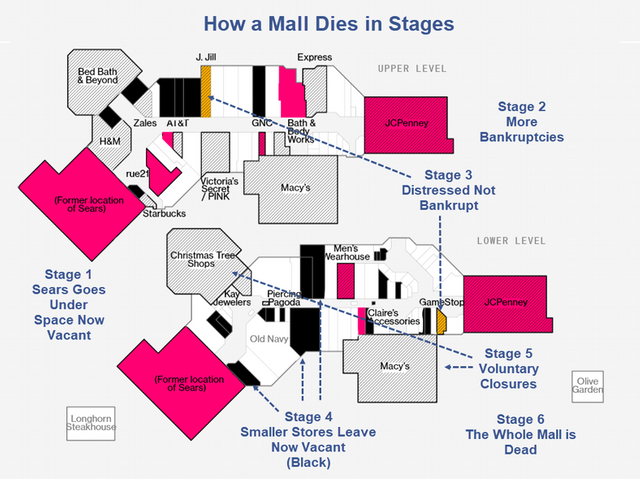 Few would point to the troubles of Sears as the onset of the decline of these malls but, as we see, it sets off a chain of events that mean these entities are unlikely to recover.

Once Sears goes, others follow by dealing with their issues via bankruptcy. Payless is an example of the Stage 2. Even if a company enters reorganization, it is likely to close down a large number of stores across the country. Thus, those that are not performing as well end up shuttered.

The distressed stores face the same issue as management starts to reorganize. They too close down stores that are laggards.

All of this, of course, keeps having an impact upon traffic.

As we descend down the scale, smaller stores vacate realizing there is no reason to pay a premium to be an location (the mall) that is no longer premium.

Finally, things are so bad that even those companies that are "hanging in there" end up throwing in the towel. As they look at their own businesses, the idea of sticking with a declining mall makes management's decision easy.

Ultimately, the mall ends up dead.

How long does this take? That depends upon the area and what stores are in there. However, we know this is approaching the end of its first decade so the process is far along. We are going to see more malls going under.

This process is being played out over hundreds of second tier malls across the country. It is a situation that affects things on many levels. Obviously, tax revenues are hit as less commerce takes place. Employment is destroyed as many entry level jobs are eliminated. Finally, malls fall into disarray which causes a blight on the community.

The next 5 years will see a clearing out of a lot of retail space. Fortunately, much of it can be repurposed although that is in question with the "work from home" movement. Commercial real estate is under pressure from all sides at the moment.