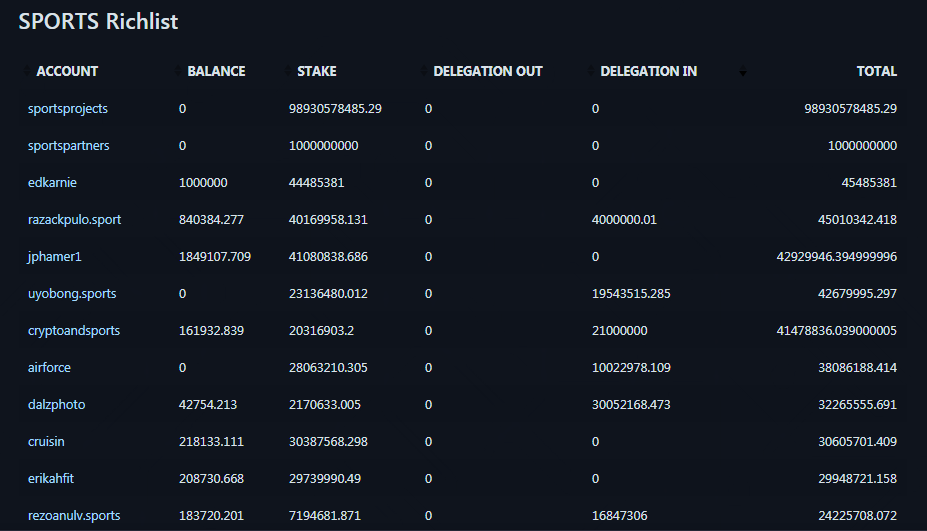 Looking back to my investment journey on Hive-engine tokens and how far I've scaled through the past few months is an amazing to behold. These few days have been devoted to SPORTS token and soon, I'll take on the "golden" LEO. When I was exposed to seeing the potential of Hive's second layer tokens, I understood how those who mined BTC in 2008 and those who purchased in 2010 felt like 12 years after.

Certainly, anyone that is seeking to invest in cryptocurrency must do that with a long term mindset since we are still in the early adopters' stage. Staying through to the mass adoption stage when alt coins would moon would require some level of self-control. The staking feature on Hive blockchain makes it more easy as an investor can power up his tokens which prevents him from an urgent access to the liquid tokens.

From 1,000 to 10,000 to 100,000 to 1,000,000 SPORTS in stake has been a deliberate journey. When it all started, LEO and SPORTS were the only I could spot their huge future, but later on, other tokens like LIST, CTP, CHARY, CCC, NEOXAG joined the portfolio. I hope that soon, Hivestats.io would have a feature that helps a Hive user to make a singular analysis of the curation earnings from each Hive-engine token.

Reaching towards the 50 million SPORTS stake mark is something worth a big celebration. Even when the worth of the 50 million tokens is valued below $2,000 at present, I'm excited that I have some reasons to adopt a crypto project when it's still in the formative age.

Looking at 3 to 6 years ahead, the value of the SPORTS tokens I now stake would be redefined. I am personally looking at a cap of 100 million stake and I don't know how long it can take to reach that mark. Who knows whether those 10 million SPORTS could become $100,000? That would be pretty cool an investment payback after 3 to 5 years.

I find some good reasons to add up my stakes of SPORTS each day as long as it remains as cheap as it is. Gathering around 3k tokens with 1 HIVE at present, is something very huge at this stage. IO greatly hope for a time in the future I would sell 3000 tokens foe say $1 or more. The justification for my push in building my SPORTS stake is linked to the fact that sports is a huge industry with die-hard and passionate fans. There presence on a blockchain like Hive could make a whole lot of difference.

Soon, I am anticipating fiat exchanges for Hive tokens and a time when games could be built on Hive or independently but requires SPORTS token to run. I see a future when Sports Talk Social and Hive would have their ads on international and national sports tournaments. This future is already here and in this same decade.

November already seems to be a bull month for cryptocurrency and I hope to see all Hive-engine tokens follow the trend including SPORTS. Meanwhile, let's keep building the stakes till we reach 100 million. Giving out 50k SPORTS in a single upvote could be something I'd love doing.

What's your target with SPORTS stake?