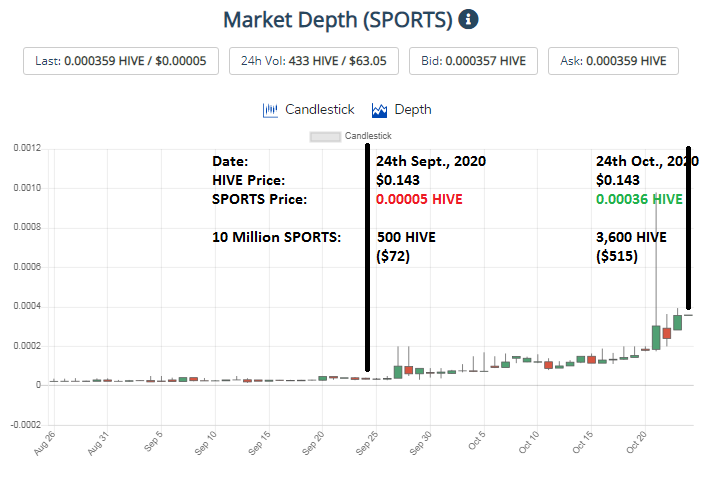 SPORTS remains one of my most cherished tokens on Hive-engine. Beginning my second layer curation with SPORTS and seeing how lucrative it has been wouldn't let me stop going for more SPORTS to stake and hodl. It is important to understand that cryptocurrency is still in the formative years and has not yet entered the adoption age. While we await that time when the masses would to the light of understanding of the value lurked in crypto and how it can reshape the financial future, there is need for the early adopters to position themselves well.

One of the ways of getting positioned is to understand the need to hodl crypto while they are cheap and be disciplined to keep them till mooning season. Sometimes, hodling the tokens in liquid format may pose a risk of an impulsive response to a temporary market trigger. This is why I enjoy staking Hive tokens. The 4 - 6 week unstaking window is a great way of helping a long term investor build value around his digital asset.

I had stayed around the SportsTalkSocial community when SPORTS experienced the lows of 0.000015 HIVE price. I saw it as an opportunity to build my stake in SPORTS while earning curation rewards in the process. Though, the waiting period seemed longer than should be and it seemed nothing positive could come out of SPORTS. I didn't actually stop, yet, I was skeptical at some point especially when most large stakeholders powered down and dumped some good millions of the token.

Things suddenly changed around SPORTS when on September 27th, a new curator joined the community and started building his stake to over 40 million at present. That little spike coupled with the token marketing through my blogs got some more eyes on the token and some traction began in the SPORTS market. Looking back to the last 30 days, I discovered how much value has been gained by SPORTS and how much has been lost by a curator who failed to risk gathering more tokens.

I had always told myself that it's possible to reach a 50 million or 100 million stake with SPORTS token. This presently costs less than $10k but that investment sum would play-out into big figures in the near future. Without much debate, we all know how huge the sports sector is and how passionate sports fans can be. There lurks a huge potential users of the SPortstalksocial community and by extension, the Hive blockchain. I'm pretty sure that should a sports team or organisation join the SPortsTalk community, the minimum stake they should go for is 50 million in order to cater for their teaming fans and supporters.

If just one curator built 40 million SPORTS stake and the price pushed 500%, what do we think would happen should other curators push 100m? Definitely, that should see SPORTS into the range of 0.1 HIVE. It's still a good time to diversify when it comes to Hive-tokens as all have a huge potential for growth. As LeoFinance community keeps opening up the opportunities that can be leveraged by any Hive token in the crypto space, it is imperative to note that any other token can follow.

$442 has been lost already, do we expect a dip in SPORTS sooner? What if it pomps another 500% in the next few weeks? I imagine the level of development and marketing on LeoFinance could be on SportstalkSocial, then the token would be trading for 10 HIVE. I wish not to say the "I wish" again. Even when SPORTS may not bull now, curating with a stake of 100 million would certainly bring back huge profits. My latest update on SPORTS curation rewards shows a near $100 earning in 30 days for a 35 million token stake.