Ethereum LP Tokens: The only way to buy KOIN at the moment (if miners dump). 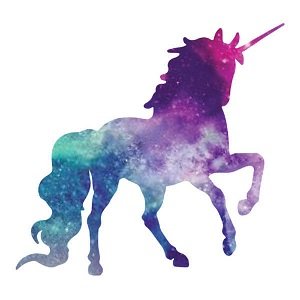 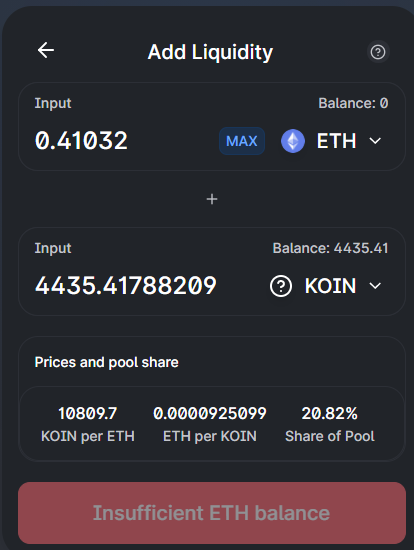 Immediately after increasing the Uniswap Koin pool by 20%,
I got dumped on by a miner, as expected.

This is pretty much the only way to buy Koins without paying massive slippage overhead.

Theoretically I've just traded 0.04 ETH for 400 Koin. 3.8 cents a Koin, not bad... also not good. Again, the mining pool has very little competition, making this lottery process extremely profitable to anyone with a lot of cpu cores and cache memory. I think I have a few friends with fast comps that can mine for me... gotta talk to them.

I consider this move an extremely low-risk gamble. I'm not too worried about that 0.41 ETH, and I think I'm about to turn it into a lot more Koinos going forward considering the circumstances. I'm actually good either way. It's a good hedge, but the mining math demands either a hard crash or way higher hashrate going forward.

Seeing as this premine only lasts 6 months that doesn't give a lot of time for people to exploit the pool or try to create an ASIC machine or GPUs to mine the algo.

Isn't it crazy how ERC-20 tokens automatically have a uniswap market connected to them on creation? Koinos been up one day and already has liquidity... even if it is abysmally low liquidity so far. I consider it an opportunity. This space tends to reward people who participate. Remember the $2500 Uniswap airdrop? I expect more craziness to happen during this next year of a mega bull run.

Cancel that: shit going down in real time.

As predicted... volatility is high... someone just "pumped" 1 ETH into the pool and now I have more ETH than I started with. This might get crazy. I've already earned 28 cents in fees in the first 30 minutes. I just sold 1300 coins for 0.16 ETH. 4.6 cents a coin. Not bad... It's going to keep doing crazy things. That can only be good for the LPs going forward. The house always wins. Bet against the traders. Charge them the 0.3% fee; they love it. Gamble gamble.

Like I said... everything about this super unique situation points to a huge amount of volatility that can be farmed in the Uniswap pool. This is especially true when the pool is very small (now). Big swings farm big rewards. And many miners have a large incentive to accept gigantic slippage losses due to the difficulty of mining being so low. There should be very large swings back and forth... perfect for Uniswap LP farming.

On one side of the Koin, we have CPU miners dumping their rewards for x50 the energy it cost to mine them. On the other side of the Koin, we have people speculating that Koinos will be a great network going forward and there are only 6 months to mine it. After that... no more mining... and the inflation rules will change (not sure how). This creates an extremely unique dynamic that promotes volatility.

What's up with Koinos (whitepaper)

We have built a brand new, high performance, vertically scalable, blockchain framework which can acquire any feature through smart contract modules running in the virtual machine. Because these smart contracts can be upgraded in-band, any behavior can be added to the blockchain without requiring a hardfork. This unlocks a new capability we call “modular upgradeability” which resolves one of the biggest challenges facing existing blockchains; how difficult they are to upgrade.

Modular upgradeability enables us to rapidly add different features to the framework without impacting any other part of the blockchain. This is how we will be able to offer a testnet in just 3 months that delivers Ethereum feature parity, but with WASM smart contracts, fast block times, and fee-less transactions. While the testnet will feature proof of work, the Koinos blockchain framework makes it easy for us to swap that consensus algorithm out for the totally new and different algorithm that we’re developing for mainnet.
Thanks to modular upgradeability, individual upgrades can be pushed to the network much like an operating system patch but with an on-chain record of the entire path that the upgrade took. Instead of having to package critical upgrades into time consuming, political, and risky hardforks, individual fixes can be pushed to the network the moment they are ready enabling Koinos to rapidly improve itself. It is that capability that we believe makes Koinos the first blockchain in history capable of evolving.

After upgradeability, the next major challenge facing existing blockchains is scalability. Blockchains hold on to every transaction and smart contract that has ever been added to them, regardless of whether they get used or not. That means that the cost of lugging around all of this expensive data gets baked into the cost of every new transaction which itself adds even more information to the chain. All of this old and unused data is responsible for the vast majority of the cost of running a blockchain. But what if we could remove all of that data, while retaining the ability to bring it back to life as if it had never left like MAGIC?

Well we have figured out how to do exactly that. We call it state-paging and Koinos will be the first blockchain ever to have it. Not only is this a genuine innovation that could be THE key to scaling blockchain to the masses, but existing blockchains like EOS and Ethereum cannot take advantage of this capability without totally rearchitecting their entire blockchain.
I saved state-paging for last because it is both highly innovative and highly experimental. All of the algorithms have been written and tested. We know we can page data out and back in without any loss in trustlessnes. State-paging works. What we’re not 100% sure about, is how much the memory savings will outweigh additional bandwidth consumption. But that’s mainly because we don’t know how people will use Koinos. In our tests we found that were state paging a part of existing blockchains, state size could be decreased by as much as 78% and that number would only increase as the blockchain got older. If we see similar numbers on Koinos, then state-paging will be a game-changer.

Essentially State-paging is like checkpoints on steroids, where modular pieces of the blockchain can be added and removed at will to archive old data and keep the servers running smooth and scaling up.

You have to give the Steemit Inc Devs some credit. They are trying to fix every problem they ran into working with Graphene and Condenser. Could this chain be the winning combination? It's all about community. Who will join? What tools will be offered? I guess we'll find out.

On the one side you'd be a fool to not dump your mining rewards for such a high payout. Take the ETH an run, friends! On the other hand, after 6 months the party is over and the real network launches. Super weird dynamic with Uniswap liquidity active on DAY 2 of 180.

If I'm being honest, this feels like EOS hype all over again. Except this time you can mine the Koin with a CPU and have instant access to a Uniswap pool. It's the ERC-20 EOS ICO on steroids, and everyone's invited. That reminds me, I still have EOS in my Metamask wallet, lol.

This is an exciting time, and it's only going to get crazier moving into Q4. November gonna be a good month. Once we get past the Q1 lull and hopefully a nice buy-the-dip February, it should be smooth sailing for 2021.