Communities For Different Types Of Content - And Something For Everyone. 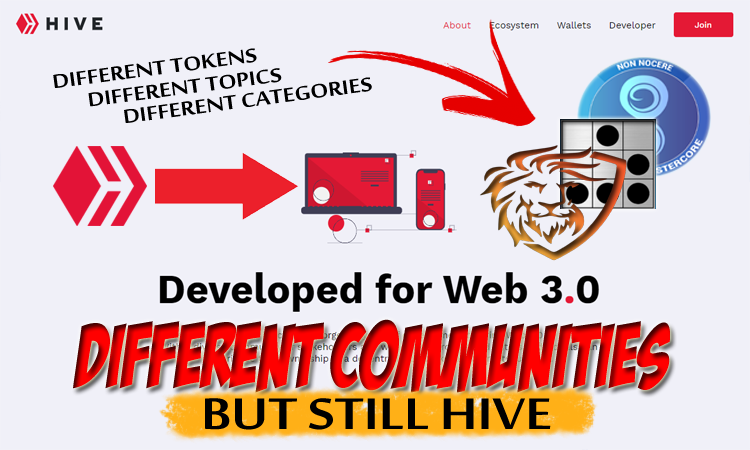 I have been here long enough to have been told literally anything you can imagine. It basically comes with being a part of this whole adventure. You meet people. You interact and communicate. That is also one of the best ways to attract eyeballs.

I have often heard people talking about rewards and the unfairness regarding it. Every know and then it blows up again and it's dozens of articles about it. People who are disappointed and/or angry about the rewards. They put in hours of effort into their articles and they earn slim to none while others earns 10x, 20x or even 100x more. I admit that the taste is a little bit bittersweet, and I admit that it also can feel somewhat hopeless at times or well, unfair... - But life is not fair.

That being said, I won't go into that too much. Honestly, it would be a waste of time, because things won't get better because you or me bitch about it. Life goes on, even if you break your arm or if you are depressed. The reason for me to mention this in the first place is to "stir up some feelings" and to make it easier for you to see things from a different perspective.

Like I mentioned in my previous post, content matters, and I am about to prove it visually. Communities should be seen as additions to your own growth and success on Hive. They are tools for you to use. Try to block your previous feelings about the trending page being filled with the same authors or that you have to write 10 or even 25 articles to make the same rewards as someone else makes on one. Try to avoid things that affects you negatively, because it will hurt you or diminish your own chances.

Well, okay. You don't actually mine stuff. You are being rewarded, but you will (eventually?) be rewarded for your efforts regardless of your pace. It's more to it though, it's not only about how many articles you publish... It's about where and about what you share.

I won't make any real introductions, but Hive.blog for instance. Literally anything is allowed. The same goes for Neoxian.city and PALnet. LeoFinance is a bit different though. You won't see much travel posts or photography for instance. LeoFinance is centered around the topics of finance and crypto.

So, if you share travel posts, I would suggest using both the palnet and neoxian tag. If you write about crypto or finance, I would go with Leofinance, but, I would also recommend using the other tags as well. Which would be both neoxian and palnet.

I already covered some of this in a previous post so I won't go into any details about it. I am pretty sure you are familiar with tags and how to use them properly.

However, I think it is plain stupid to not use these tags, as you will be rewarded other tokens than Hive, + Hive. Which ultimately gives you more viewers and a higher chance of being rewarded more than before.

I mean, take my most recent post before this one:

That is the same post, on Hive.blog, Neoxian.city, Palnet and LeoFinance.

The cool part about this, is not only the fact that I am rewarded different tokens alongside with the Hive I get from Hive.blog. It's the fact that people who might have missed my article on Hive.blog for instance, might see it elsewhere.

So user x might have missed it on Hive.blog but they come across it on LeoFinance and decides to vote on it. Or vice versa. This automatically increase my chances to be rewarded for my contributions. The different communities also gives me a place for the content I want to share. Perhaps I'm going all-in on LeoFinance and never shares anything besides stuff related to crypto... But why should I leave a piece of the pie on the table by not using these other places to earn from simultaneously?

The short answer is that I shouldn't leave it. I should take as many crumbles I can carry, because that is the quickest way for growth. It's the best way to grow my audience and to attract eyeballs to my content. To get wiewers.

My own biggest problem with this is in fact LeoFinance. A place I learn from and a place I want to share things on, but I am not a crypto expert and I don't feel like I am someone who can contribute a lot with crypto- or finance-related content.. So I will miss out on things over there. The good thing is, that I can and will use other communities as much as possible and when I can, use LeoFinance too.

That being said, you might be a super-savvy crypto- or finance person. Someone with lots of skills or knowledge, or someone who's just good at producing content in various niches... - What are you waiting for?

Stay positive and do things at your own pace.
That's how you will succeed and win the race.