The worlds real estate business is worth trillions of dollars and a large percentage of the population believe real estate always goes up, so money is continuously pushed into it. We've built megacities that have consolidated cash and jobs in one area, and more people want a piece of the pie. As people flock to cities to get access to employment and income, it drives up the price of real estate.

This can be commercial or private real estate, as companies want to be where the business happens, and people want to be where the money is sitting. Then there are businesses like malls and restaurants that benefit from this consolidation of people and for traffic that have a disposable income.

It's a black hole for capital, and in an inflationary monetary policy environment, it never corrects, it always continues to absorb more capital. Construction increases, rents increase, sales prices increase and no one questions if there is a ceiling to this boom. 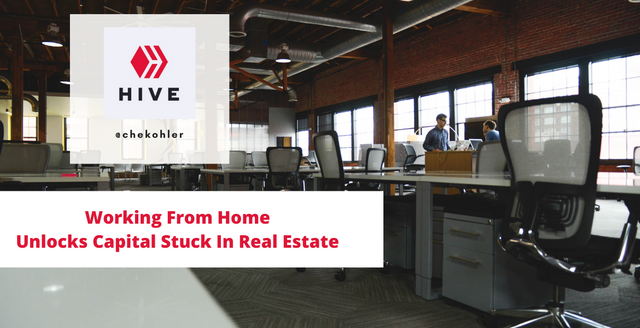 Working from home is essentially labour decentralisation, while it may begin with people who have left the office companies will soon realise, that those who leave the office to move to cheaper places or live in more affordable areas (overseas) are a better bet.

I've spoken previously on how cryptocurrency can bring western wages to talented people in developing nations, and I think this trend will continue to grow.

Companies know labour is their highest cost, so if they can cut it by labour arbitrage or automation, they are going to do it. The more people working from home, the less need for travel, the less time wasted commuting, the less need to live closer to the office, the less foot traffic in those cities from individuals with disposable income to spend.

This will have a knock-on effect as companies won't pay premiums for office space but only buy or rent what they need since the expansion of the company doesn't mean more bums in seats.

As I said earlier if employees aren't tied to the location of their job, this means less pressure on rental income. So this will fall as well as the price of homes in these cities.

Good for people, bad for investors

This trend will drive deflation as more currency is spread over a range of locations, building businesses in other areas as income gets dispersed. This drives broad-based abundance and is better for the overall economy as businesses get the best labour at the lowest prices and work more efficiently to produce more with fewer expenses.

This is a positive trend for society, but a bad bet for those who are up to their eyeballs in debt and were playing the real estate game trying to milk overinflated rental income. These investors are either large companies, hedge funds and investment firms as well as banks. Additionally, a lot of it is tied up in pension funds.

Governments will come in to fight the deflation

As this trend continues to let the air out of the bubble, governments will rush in to stop it. Instead of allowing bad investments to go bust and let these investors get cleaned out, they will use inflation to save these poor capital allocators with public funds taken from you through either tax or inflation.