ZERP and NERP Results In People Living On The Curb

As the economy continues to take strain under the enormous debt load, we face in homes, governments, corporations, education, credit cards and more. The world runs on debt, and a debt run economy eventually overextends itself to a point where it cannot pay it back. Interest rates a premium on time, and if debt gets too high, the interest rate is higher than the ability of the debtor to exchange time and labour for money to pay back the debt.

The larger the debt becomes, the lower the interest has to go, or too many people will default and cause massive deflation and the systemic collapse of the business and the economy the way the 2008 financial crisis almost did without a bailout.

Artificially low interest rates may give retail and consumers some breathing space, but it by far benefits those who have access to the capital markets. 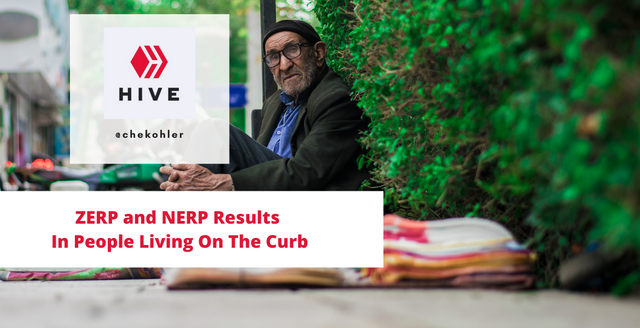 No income, no job

As economic growth slows down, more people are left without jobs or reduced hours, or reduced salaries, something has to give. As they save to pay for essentials, other parts of the economy suffer.

Let's say people now spend less on eating out that means restaurants get less income, meaning they cut jobs, meaning food suppliers and beverage suppliers cut jobs as everyone up and down the value chain leans up to try and survive.

Why would those with an income want to take out debt when the economy is in the shitter? It's a catch 22 that cannot be solved with simple rate cuts.

As people continue to default on their homes over the next 2 years, because of loss of income, banks will be under systematic risk. They cannot afford the admin, nor the time to repossess all the houses and then auction them off to cover debts, this doesn't suit them, they need the cash flow to survive.

So what they will do between banks and private companies is buy up distressed loans, take ownership of the property and then turn the homeowner into a renter at a lower price.

Why would they do this? A to generate cash flow, they move the debt to a private company with enough on their balance sheet to hold it or package it up as a financial asset to sell-off.

They also turn the distressed asset into an income through the rent that provides a yield. In zero or negative interest world, any sort of yield is attractive, even if it comes at the cost of eroding the fabric and stability of society.

The middle class and the poor have been gutted for years of their earnings through tax, of their savings through lending schemes and inflation, and the wealth gap will continue to grow as these policies continue. If consumers cannot find it within themselves to say no to credit and allow deflation to happen regardless of interest rates, they will continue to see their wealth erode until more are left with nothing.

It's policies like this that make me bullish on Bitcoin, the only savings mechanism I can think of that benefits from these low rates.