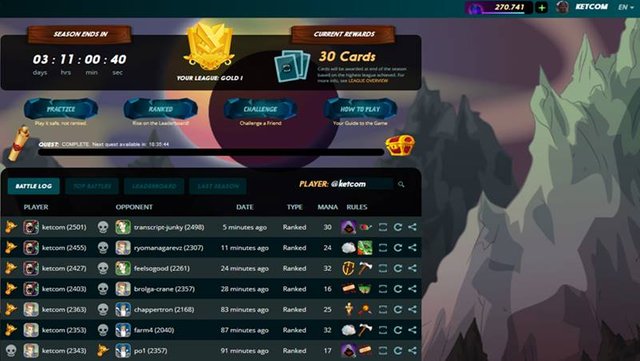 About three weeks ago I decided it was time to invest in the Steemmonsters (Splinterlands) cards by just buying $10 worth and leaving it for say 6 months to see what becomes of it. I had been hearing a lot about how the value of some of the cards had gone up more than 10X in some cases and was shocked to be on this platform and didn’t ripe from such windfall.

I have never been a gaming person not because I didn’t like them but because I keep losing each time I tried to play them, even my 10 years old kid beats me so I didn’t think it was something I could do. But buying and holding cards were something I felt was a piece of cake and I could do that. I think my biggest mistake which I thank God today for allowing to happen were the fact that I didn’t read to understand the difference between a Starter Pack and a Booster Pack.

I had $10 dollars to spend, I want to Smartsteem.com where I had seen that you get a loyalty percentage cash back bonus if you buy from there website. I went there and for sure the products were there. I bought the $10 starter pack and headed over to the Steemmonsters website to login and see the cards I got. Sure enough the cards were there but they weren’t allowing me to see the values of each of them. I headed over to the Peakmonsters website to see if I could get their valuation there but still nothing. I rushed over to their discord channel to see if someone can explain what just happened to me. I was then informed by @aggroed and @chrisroberts that what I got was a Starter Pack and that those ones allows you to play the game and not meant to be traded. Hmmmm.

The reason @chrisroberts gave me for the setup been that way was very understandable as it was curtailing a lot of abuses. @chrisroberts even went further to ”Gift me 4 some Summoners” which I didn’t know what it meant then but was very happy that at least I got some free cards.

I was busy with my regular work so I put off doing anything on it for about 2 to 3 days after which I watched some videos on how they were been played on Youtube and then went ahead to buy some monsters ignorantly because I didn’t know you had to level them up to give them more abilities. Lol. The first time I tried to play the Steemmonster game I clicked on Battle waited briefly but it was showing this loading image so I went to another page to do some work, by the time I came back I saw that I had been defeated. What a turn off! I didn’t even play the game. That happened the next day too, I clicked and felt the loading was taking time and went again to another tab I think to reply and email and when I was done I saw that I was defeated when I came back. Hmmmm.

Finally it was weekend and I had time for myself now, no office stuff making me switch pages. Watched more Youtube videos and discovered I had to wait for the loading to complete so that I can select my summoners and monsters. Again, I didn’t read the instructions and spent ages trying to figure out the summoners and monsters to do battle with. I kept wondering why a ranged monster I put as a tank wasn’t hitting any monsters. Lol. Honestly, I didn’t know what a Ranged, Melee or Magic attack was, I didn’t know what the speed, health and all those other stuff was, I was just selecting at random and getting my behind wiped. Lol. I did manage to win few though, that felt great mahn. Lol.

I now went back again to watch all the videos that had to do with Steemmonsters (Splinterlands) by a guy called Tanbay on Youtube. I also watched videos by @clove71 and some other videos I found interesting. I also went this time sat down with a cup of coffee in hand and read the How To Play section of the website. All these stuff took time but it was worth it.

I came back and started fighting battles and winning loads of them this time. I must confess that I don’t still know all the abilities by their symbols but the new update by @aggroed, @yabapmatt and every other person working with them is greatly helping me. I can now hover over a monster to understand what abilities they have. 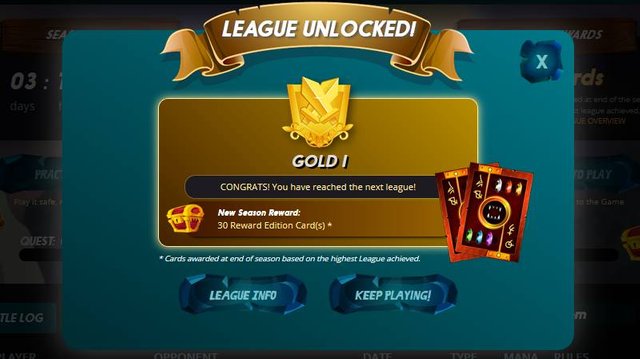 My goal when I started like I already mentioned was to invest in buying and flipping the cards at a later date, but as I started playing my goal changed to attaining at least the Silver III League because I felt at the beginning it would take me a year to get there. Lol. But I hit that target within a week after my initially fumbling. When I got to the Silver League I felt the Gold League was the next target and today I hit the highest spot on the Gold League which is Gold I. 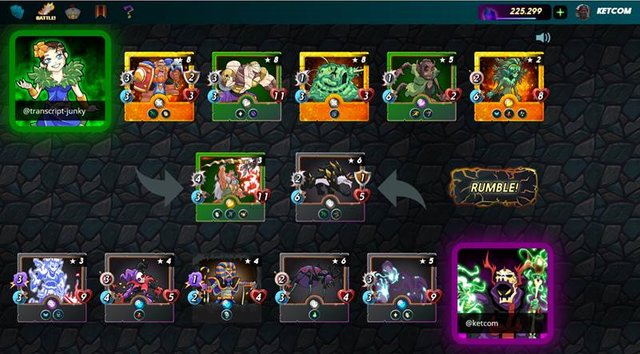 https://steemmonsters.com?p=battle&id=d1dfad59ddfade1c8c16414a5d3c25e56a896ec9&ref=ketcom
The last battle that landed me in the Gold I league 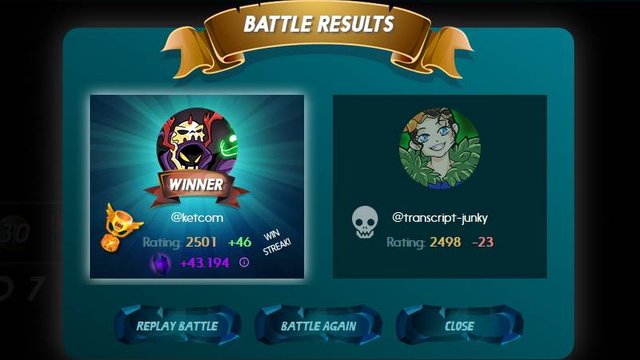 I think my goal going forward would be completing my daily Quest, playing in tournaments and learning more. I am enjoying the game as there is a lot of strategy work at play in it and I am finding myself short in that area a bit but I am doing better as I progress. If that lands me in the Diamond league someday, Yeepee!!! If not, I won’t be disappointed. I’ve got 30 cards to collect at the end of this season and that is something to be happy about.

If you haven’t join Steemmonsters (Splinterlands) you can use my affiliate link below to join and start playing this fun game and a good form of investment as the returns are great when the price of the cards appreciates.

You’re sure to receive all the support I can give, I'll appreciate it too. Thanks.

Thanks for reading. Keep your comments coming and follow me if you have not already done that. Again, thanks a lot for your support to me always.