Splinterland Strategies: Is it the January Sales?

Has anyone noticed cards on the ’used’ marketplace have been going down lately?

With all the hype about the increased activity, I find this a little strange but nevertheless have been taking advantage of cheaper prices.

Perhaps it's due to the month of January and everyone being broke after the 'thing' we call Christmas. You may guess that I'm not a big fan of the holiday season, besides the time off work we get.

So let me highlight some of the bargains I think are around at present.

I view this promo card from the 'Winds of Change' expansion as the Life version of Brownie. At Level 1 it is an unassuming card that looks like it is of little worth. 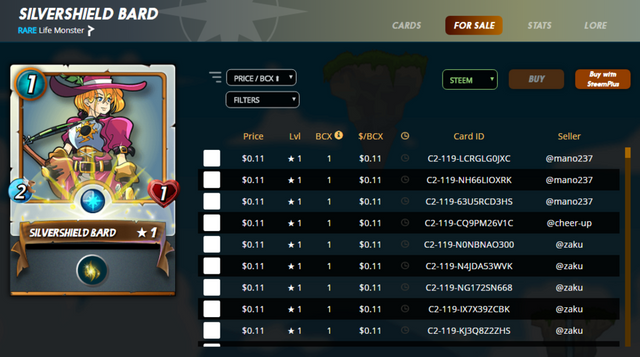 At Level 5 she comes alive and bestows the global buff of Speed to all your monsters.

Costing just ONE mana and another ability that is albeit quite narrow (Cleanse), I figure this to be a decent buy.

Silvershield Bard’s are currently selling at 11c, the Earth equivalent that is Brownie sells for 28c.

I figure her to be a decent buff card to place in your mid ranks, especially when playing those low mana games.

I have to ask myself if I have room to fit this card into my Water splinter lineup. At anything less than Level 4 the answer is going to be a resounding NO. 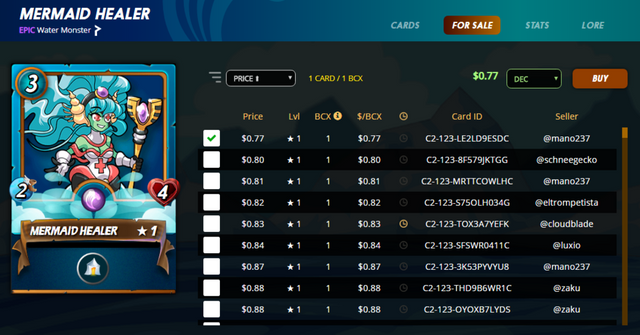 Triage is a decent healing trick than can work as a counter against the scourge of Water Splinter line-ups that is Lord Arianthus.

With the addition of Strength at Level 4, we then get another global buff to your monsters that may overcome that dastardly Lord that everyone uses (including me!).

Until recently Mermaid Healer was around $2 each but with those sales kicking in and you can now pick her up for the bargain price of 80c or so.

I categorise these as one, though the former is Common and the latter Rare due to their casting cost and ease of availability. 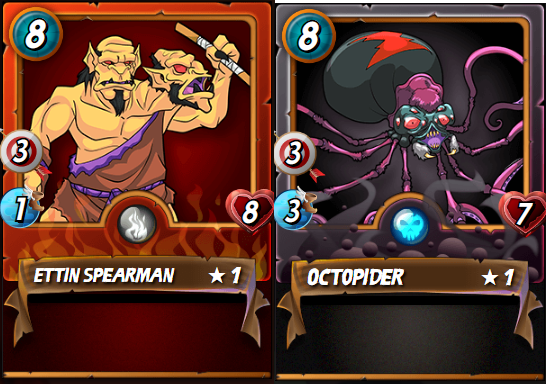 Both cost a whopping 8 MANA to use but with all these high mana matches I'm getting, I find I'm using both of them more.

Ettin Spearman is great for those on a budget, he’s a big lumbering Cyclops best placed in the mid ranks somewhere and hits hard right from Level 1.

Octopider is a similar card, also ranged like Ettin Spearman. At Level 3 he gains Demorolise, a global debuff for your opponents' melee monsters. 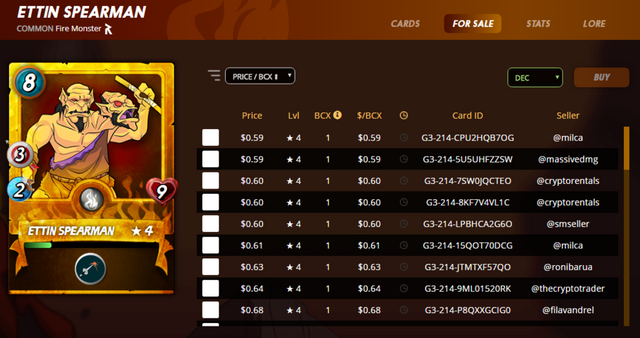 ...'Gold Ettin Spearman's are currently very cheap at 59c. Remember they come in at Level 4 and can win you more DEC being Gold'...

Both are cheap and are good targets for those on a budget. Ettin Spearman will set you back around 2c, and Octopider around 10c.

Of course, you can just do the daily quests and get these for FREE if your willing to be patient.

I had to include this dude, as he's a menace in those big mana games.

At 21c he's expensive for a rare reward card but well worth getting to Level 5 for the treble effects of Sneak, Double Strike and best of all Poison. 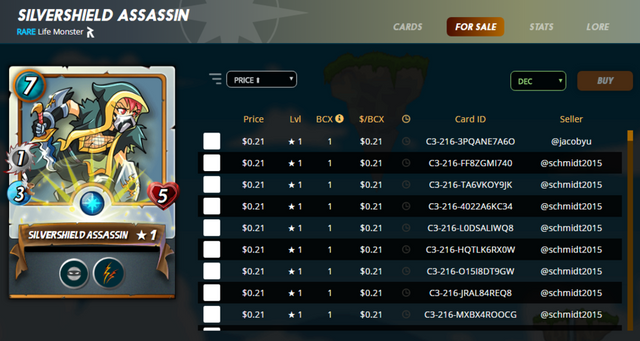 Life is supposed to be a squeaky clean splinter and that last effect goes against the grain a little.

I can't tell you how many matches I have won using Poison mostly using the Death Splinter so I took a lot of notice when I spotted the Assassin.

...'He's an evil bastard at Level 5, using sneak, backstabbing and poisoning the bad guys for you'...

I will be gradually levelling mine up as he's a reward card and I get a decent amount of those.

Don't underestimate Double Strike, at Level 5 he's whacking the bad guys for 2 and then 2 again with 2 chances to place that Poison.

Does he fit in the January sales? What is he going to cost when the prices stabilise again?

If you found this article so invigorating that you are now a positively googly-eyed, drooling lunatic with dripping saliva or even if you liked it just a bit, then please upvote, comment, resteem, engage me or all of these things.