I was watching a show on Global Warming and Climate Change last night on CBC and there was an interesting discussion about Polar bears and how they are adapting to the changes and learning to eat mostly grass and other vegetation.

I know that the ice is melting and that the earth is warming .... humans, especially Politicians, Actors and Scientists are still flying everywhere and driving in big cars so obviously it is not human caused or these people would not be flying or driving big cars.

If humans can become vegetarians to save the planet why not the animals? So there are no more seals on the ice for the Polar bears to eat. They should just learn to eat grass like the rest of us middle class humans.

We are all in this together, the animals, the politicians and Scientists need to start doing their part. 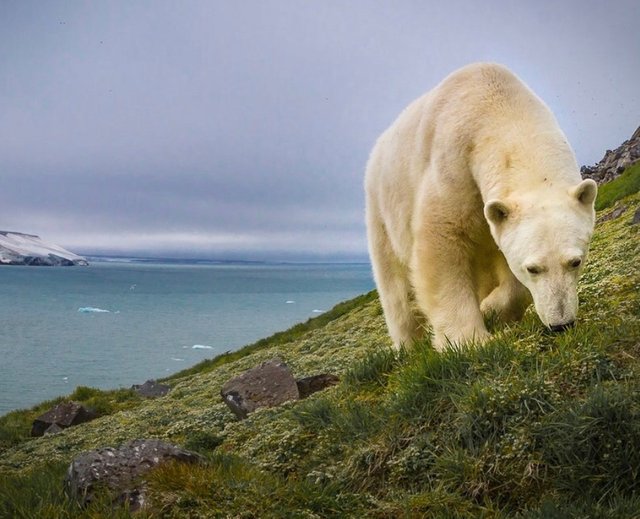 What our results suggest is that polar bears have flexible foraging strategies," Linda Gormezano, a biologist at the American Museum of Natural History in New York and a co-author of several of the papers, told NBC News.

The results stem from research in western Hudson Bay, near Chruchill, Manitoba, Canada, which is in the southern extent of polar bear habitat and serves as a harbinger of what the animals are likely to face throughout their Arctic range as the climate continues to warm and sea ice breaks up earlier and earlier each spring.

The flexible foraging strategy of polar bears "means that there may be more to this picture in terms of how polar bears will adjust to changing ice conditions" than indicated by models based on the spring breakup date of the sea ice and thus their access to seals, Gormezano said.