The Problem with OG NFTs and Certifications

The Hype for NFTs is just that, a baseless Hype with no actual use case and it will die soon.

Now that I have your attention, and before you start typing on the comment section how is it that I have no idea about non-fungible tokens (see, I even know what the acronym stands for), hear me out, I actually don't think what I stated above - maybe a version of that statement, but not exactly that.

This weekend I visited a friend that has more money in Art than what Blocktrades has in Crypto. I mean I don't even know how much that is, and I'm pretty sure that BT has more, I'm just exaggerating in order to make a point, I hope you saw that. The point is, he's got hundreds of paintings, tens of sculptures, sketchbooks, book drafts and even dribble paintings from artists the size of Picasso.

But he is a disorganized, unclean, scattered up there, and imprecise when it comes to his house and his belongings. If he likes you he gives you a small sculpture as gift, but good luck receiving the Certification of authenticity that should come with said sculpture. He's got it, he just has to find it.

And damn, you should see his office. This is not just your regular office, it is an office composed of 4 rooms, all of them around 4x4, full of papers, boxes, photos with Mexican artists, posters of all the events he organized for other artists during the past 4 decades, awards, some art, and I wouldn't be surprised if we found a family of badgers living there in one of the dark corners.

This is a never-seen-before sketch, do you recognize the style? 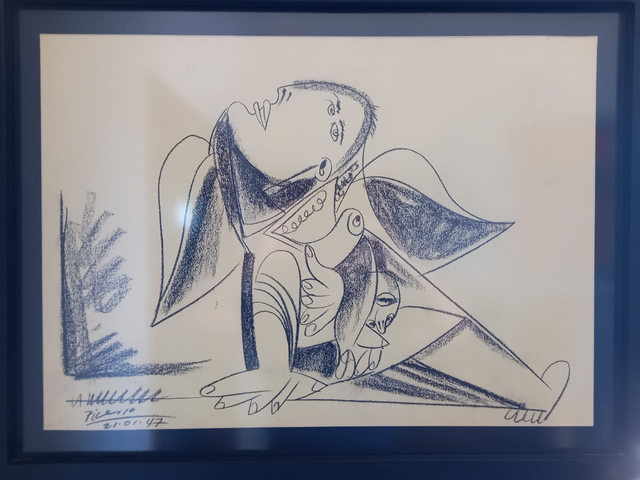 But let's be honest, styles can be copied and it takes a trained-for-years-perhaps-decades eye to know if this is a fake or to confirm it is an original piece from the artist.

There's no certificate, or at least it got lost a decade ago and to find it would mean to have to organize 4 rooms that the owner doesn't want to, and doesn't want anyone else to do it. And even if there was a certificate to match the sketch, certs can be forged as well, there is no immutable physical certificate out there, records can be modified and serial numbers can be faked as well as the serial numbers' source.

This means nothing in a world where anything and everything that belongs to this plane can be forged: 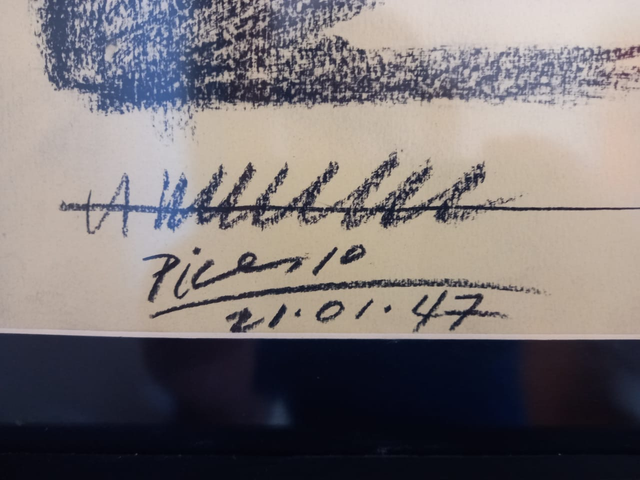 Yep, this Picasso is worth millions of dollars - maybe hundreds of thousands, I'm not an art curator - and if only there was a company that minted certificates for art pieces like this one, this piece could be sold. In the meantime, this belongs to my friend's living room where only his mom can see it when she goes visit on Saturday.

Unless we find a way to convince housewives and mothers that the Metaverse is the future and that their online house should be better decorated than their irl house, the real world still has a big role to play, and even though we've seen a shift in online gaming (at least cellphone based gaming, not the real gaming) and middle aged women have been a huge market for this type of games over the past decade, I am yet to meet a woman who has more attentions to her Facebook Farm rather than her actual living room - unless she has a gaming addiction, a problem with drugs or an issue related to depression, but that's another story.

The real world still has much more value when it comes to our peers. I'm pretty sure that owning a digital monkey holding a skateboard will become more of a trend in the coming years, but owning a monkey to decorate your Metaverse living room will never trump owning a painting to decorate the house that your parents visit every Saturday.

Unless we all permanently move to the Metaverse, which is something I hope I don't get to experience until I'm too old to understand it.

But in the meantime, we are stuck between a real world and an online world, and I haven't seen a real use case of NFTs that puts this concept into practice effectively and successfully - but I haven't browsed the entire internet, if you can point me to an example of this, that would be very much appreciated, after all I don't own the truth and there are several people on Hive that know a lot more than me about this topic.

I don't mind putting this idea out there, if you want to tackle it be my guest, I know I will once I have the skillset to do so.

I know there are already concepts out there of merging the NFT concept with the real world like doing Real Estate transactions using Blockchain tech and the concept of NFT, but those are still concepts in the making, I will believe the concept works when I see a company built for the real world adopt it, instead of a tech company develop it for the virtual world (such as metaverses with land ownership concepts, which is cool but it doesn't merge the two planes, the virtual and the real).

What I meant with my first statement is simple: NFTs as they exist at the moment and what the hype is mostly based of, is definitely not a sustainable concept and when someone steps up and finds a working concept that successfully merges both planes in which we exist at the moment, will really hit the pot and will change the Crypto Metaverse forever. In my amateur, non-connoisseur opinion, that will be the beginning of 4.0

In the meantime, we can still make some bucks riding the market wave and the hype tide. And I have no issue with that. Perhaps I'm just eager to see what the next innovation is, and what will it change, both in this world and the virtual one.

The NFT world is changing whether we want it or not. How? By adding ownership to it and being in a digital form that can be done through the code itself. And add some encryption elements in order not to be able to replicate and that should seal it.

The thing is, I would like to see a project that mixes all that you say, with IRL use cases, not just virtual cases, but you're right, we are on the verge on 4.0

Yay! 🤗
Your content has been boosted with Ecency Points, by @anomadsoul.
Use Ecency daily to boost your growth on platform!

I'm suggesting reading few articles about NTFs and gamification, very fresh (for me, I've also been confused about understanding of NFTs ...) in #Hive, of course, 😎 if you already read, just skip ...
https://ecency.com/hive-167922/@detlev/the-gamification-of-nfts-and-how-to-use-it

Thanks! I will definitely check it mate!

So far the use cases outside of the digital equivalent of fine art (this is currently also unreliable due to certain types of people who are too selfish and stupid to realise that they are the sole reasons why we can't have nice things) I've got for nfts are adoptables (I wrote a big long thing about that and as far as I'm aware only @nyxlabs has been game enough to play around with it, I did say at the bottom of the big long thing that I didn't have the time never mind the skillset to do it myself and was hoping someone else could run with it) and game items (cards like in Splinterlands and the random "collectible" things you can find in most video games, hell why not even the in-game items like guns and armour and stuff seeing as people seem to be selling them for fiat anyway even though it's almost always techically against ToS).

The adoptables/breedables scene is surprisingly large and gamers aren't exactly a small population either.

There's probably a lot more that could be done with it but I'm not that imaginative :)

These NFT is what everyone that knows about it is doing now. Is good if you join early. Because the NFT is already changing the world.