I was dragged to the city's most popular mall on a Sunday evening, apparently we couldn't wait until Monday to buy some stuff.

I gotta tell you, I was dazed and confused at how hard it was to find a parking spot, and then I was completely terrified at how crowded the whole mall was.

This is the fast food court at around 6pm pm a non-paycheck weekend: 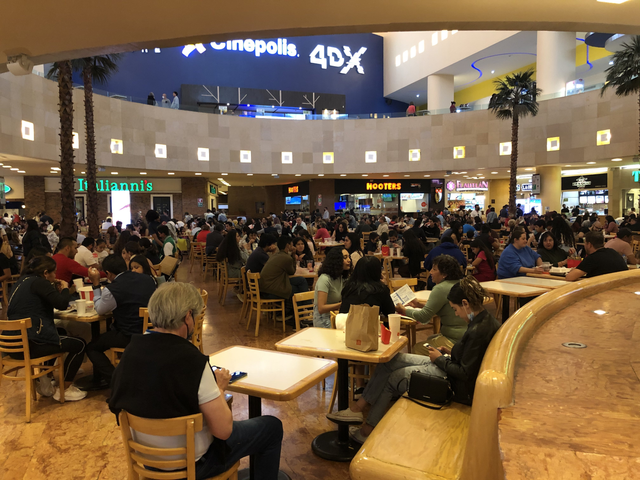 Paychecks go out every 1st and 15th of the month, but that is apparently not a problem for a shiton of people in my dear Mexican city. I don't live here, I left Mexico city back in 2016 to never return, and I obviously don't live in this city, but I live pretty close to it.

I don't really care what is going on through their mind right now, I just feel terribly bad that pretty much 99.99% of Mexico's population has zero financial education, basic understanding of economics, and literally nobody has a saving/preemptive culture.

No wonder credit cards and general credit rates are above 40% annually, because somehow banks have to think about the huge percentage of people who will just conveniently forget about this credit the moment things turn sour.

Man, I am so glad I found out about cryptocurrency 6 years ago, and I'm so glad that even though I heard about BTC in 2011 and didn't buy, I didn't have the wrong mindset when I had the chance to start stacking crypto around 2017.

Putting it as simple as possible, owning Crypto is having a hedge against Fiat and a plan B against inflation, and damn it is working.

I have no idea if your local mall looks like this on a Sunday, so please do share how it looks in the comment section. All I can say is, no wonder we are a third world country, and no wonder people will be starving in a few months. After all, they did everything they could to not save money during these times while buying fast food and purchasing crap. It's that easy.

I don't have any more to say, in fact I was hesitant about publishing this post, but I just had to rant a little bit and get this image off my head.

Man, it sucks being surrounded by ignorant people, and having these people vote - and theirs counting the same as yours - and worst of all, allowing them to contribute to the huge crisis that is already here, they just don't know it, and once they realize, it will be too late for them to do anything about their situation.

Where do you live man? I live in Brazil and its kinda the same, not financial education, peoplebuy expensive shoes with faulty credit cards, tyhat charge theme xtra from an unnecesary thing, its the media, the ads, the socials infleuncers teeling youngsters that they need is this or that. Eventually they will turn u,or hope so, nmew generations are facing issues beyond their power.

Your title made me read the entire content. And I do express the same sentiment every time I go to malls (which I rarely do). Every time I hear the news that recession and inflation have been unstoppable and then go to malls and what? I thought people don't have money. Hmmm!

Sadly, financial literary is frowned upon in our country. Perhaps, 5 out of 10 people I know don't even have emergency funds. Hopefully, this gets addressed.

Damn that's alot of people. It's been a few years since I visited a mall but even then it seemed as though the mall here was dying.

The faster the economy falls the more money people throw at it in their denial of the inevitable. It is difficult to impossible for some to accept the dying of the system as they've known it all their lives. You're right..owning crypto is becoming a necessity at least in my life.

The economy needs those people too. If everybody stop spending then our society that is build on debt and consuming would collapse .

Here is where you defined the real problem:

I just feel terribly bad that pretty much 99.99% of Mexico's population has zero financial education

Its worst in my part of the world. People dont seem to look beyond the figures in the fiat note. And once they make sales from their business (its a commercial city), they dont care about any thing in the world other than spend, merriment and fun. These are ok when done responsibly, but few do.

It ends sadly where someone financially buoyant suddenly struggles to make breakfast. Its a really sad situation.

I can't remember the last time I was in a mall. My wife and I don't even leave the house for grocery shopping anymore. We do it all online and have them delivered to us. Sure the prices of stuff is going up like crazy, but the money we save not buying all of those impluse items more than makes up for what we have to pay to have them delivered. I think a lot of people don't realize what is coming their way. It's going to be sad. I am saving and investing in crypto, but I still don't think I am tucking enough away in my savings account.

It's hard to blame them. Few people have any financial education, and shopping (even window shopping) does give those dopamine hits which make people feel better.

You have it the other way around. I think the news and media, even internet media have you convinced that your economy sucks and that it will get worst for everyone. I call this the 'oxxo nation' picture. Meaning a picture where it assumes everyone in the country have a meaningless job, is buried in debt and can hardly afford food.
However, the reality is very different, streets are crowded with not so shitty cars. The city is growing on surprising ways in the past few years, and most of these malls get crowded every single day.
The level of wealth can sure be handled by the stats at a national level, but your close reality is hard to fight it. Commerce and businesses are everywhere and will keep going despite of how terrible the news get.

We need rich spenders if rich people stop spending, middle class stops ordering online, then real collapse would happen. And that collapse would be so painful, neither crypto, nor fiat can solve the issues as it would be chaos on street. Spenders are good. Cashflow has to flow for economy to get back to normal. We wont even feel a thing if cashflow from big spenders continue into the various places in the city, state, nation for that matter.

I live in Canada, and the Malls are light compared to your picture in Mexico. Most patrons are seniors. I tend to look for businesses that will accept any Crypto but very few do. A liquor Store nearby has a Bitcoin ATM and does accept it. With the media here constantly critical on crypto it is no wonder it is hard for most Canadians to adopt it.

While I hear everyone talking about crises and food shortages, I believe that there is also an induced and altered reality of that. For example, in my country, there are grains rotting in silos just because the market is flooded with cheap grain from other countries. So where is the food crisis in this? Too much manipulation and too few real facts in order to reflect if there is one crisis or another or none.

Well, Mexico can turn into the next Venezuela, some would say.

People are ignorant and like to be seen and the best thing to be seen is in a mall, buying the attention from others

It's the same here. Mostly Mexicans coming to the mall and other places in McAllen, TX for the weekend.

I would distinguish. Those who have money in Mexico have money. An economic crisis might mean less money. But, they'll be OK coming over for an occasional weekend trip. Those who don't have money also don't come over on tourist visas. We mostly get visitors from Monterrey. Not too many from other parts of the interior.