As the day passes the adoption increases, the path was laid years by but wasn't acknowledge because of some selfish reasons or maybe just insecurities, nevertheless now it is official, publicly renounced and although a few sturbbon fields are still trying to pull it down, but what the trends carry isn't always easily controlled by the government, the influence rate is therefore unstoppable.

Bitcoin sets down a milestone, altcoins followed and then a community of digital assets is established: Cryptocurrency.
These digital assets has been a project set out to generate income and employment - mostly on a long term. The insipid accusations were made to ternish this good initiative, but trust was built among great leaders to ensure that the project survives the threats. Now the masses are pulled in and the refusers would sooner have no choice but to join the train, cryptocurrency train. 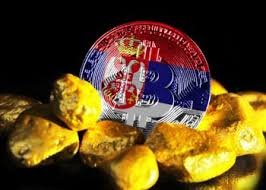 Serbia has been a lacking back country in terms of cryptocurrency adoption. The domestic regulation of funds weren't in support of Bitcoin or any other cryptocurrency as a means of payment. For the fact that crypto distribution and total digital asset regulation could not be controlled by government bodies, the harmless project was banned and refuse in the country. But now? Change of plans, maybe because of Bitcoin become more bullish by the day or maybe because of the massive population adapting to this new system of finance. Either ways the Issuance of digital assets in Serbia has been legalize, making cryptocurrency an accepted means of payment in the country.

With the new rules, digital assets can be issued in Serbia with or without an approved white paper, though an asset with an unapproved white paper cannot be advertised in the country and there are limitations on the amount of such assets that can be distributed.

When it comes to trading, digital asset exchanges will need licenses to operate, according to the new law. Secondary trading of digital assets issued in Serbia (with an approved white paper), over-the-counter (OTC) trading and use of smart contracts in secondary trading are also allowed.
credit

With the implementation on ground, what is most important is cryptocurrency purchase circulation within the nation is now legal, no more laws to restrict digital assets transactions. This approval was made under a law that went into effect Dec. 29
The Crypto train keeps moving and onboarding new projects, pulling trends and increasing adoptions. It won't be long till the whole world kicks into this project that focuses on changing the future of economics and finance.