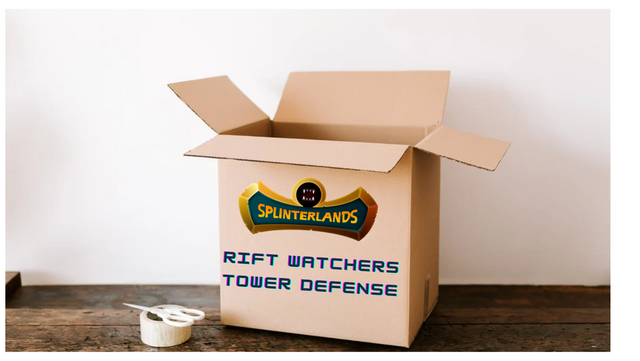 Less than 24 hours ago, Splinterlands dropped two bombs of information on the community that looks set to have a positive effect on the value of SPS and Voucher tokens. The much anticipated Rift Watchers collection and a new game mode will be hitting the scene soon, and this looks set to drive a lot of interest towards the aforementioned tokens.

As confirmed a long time ago, Rift watchers packs will be bought with SPS tokens while vouchers will be used to claim bonus packs after you purchase 100 packs. This alone looks mildly bullish for both tokens with all things considered.

At the time of writing, there's already a countdown to the release of the Rift Watchers collection. There's a whole 8 days of accumulation available for everyone, so I reckon this presents an opportunity for everyone.

The richer players and node license owners will most likely get a more significant piece of the pie but I think there will also be some savvy investors looking at this as an opportunity to get packs.

The Rift Watchers collection will be minimal and I think it will sell out in a matter of hours. I could be wrong, but I seriously don't think I am. This means that investors will want to grab as many SPS tokens as they can to ensure they get a decent number.

How many packs are you getting?

The market value of SPS will determine how many packs I manage to get my hands on. I expect a considerable pump in the price of the token before the sale starts, so the tokens I've held on to for a while should cut it.

One other thing I have to consider is the value that is going to be housed by each pack. Is buying a pack more valuable than holding SPS token?

The way I see it, I earn SPS tokens and I'll be minting SPS tokens for a long time. I can also always buy SPS tokens whenever the opportunity presents itself.

So, while SPS could have more value in the long run, investing in Rift Watchers packs is getting a scarce asset into my portfolio. Adding the monsters to my personal deck will also add some firepower to my growing deck that is being groomed for ranked battles.

The other bit of information that was recently announced was the launch of a Tower Defence mode that also heralds a new set of monsters. The presale round will offer 250K packs and that's also something I expect to sell out pretty fast.

I have a couple of voucher tokens right now but nothing significant enough to make a big splash in a sale that is dependent on vouchers. According to the publication, each pack will cost $5 worth of vouchers.

Just like Rift Watchers, the market will determine how many Tower defenders I add to my collection. In any case, I don't think I'll be buying vouchers specifically for this sale and the only asset I'll use for this sale will be the vouchers that I mint from staking SPS tokens.

In some way, this collection will encourage people to buy vouchers since every round of sale after the presale also has vouchers contributing towards discounts.

In any case, I don't think I'll be placing too much emphasis on this side of the game. Anything I get here will exclusively be for flipping and trading purposes. Funds are tight right now and I can't afford to go out of my way to invest in more packs.

I like tower defense games. Shall I sell some of the SPS and buy packs? I will decide after the release of the game. Bullish news anyway.

Bullish news for splinterlands, I don't even know how much pack I will be getting but should be around 50