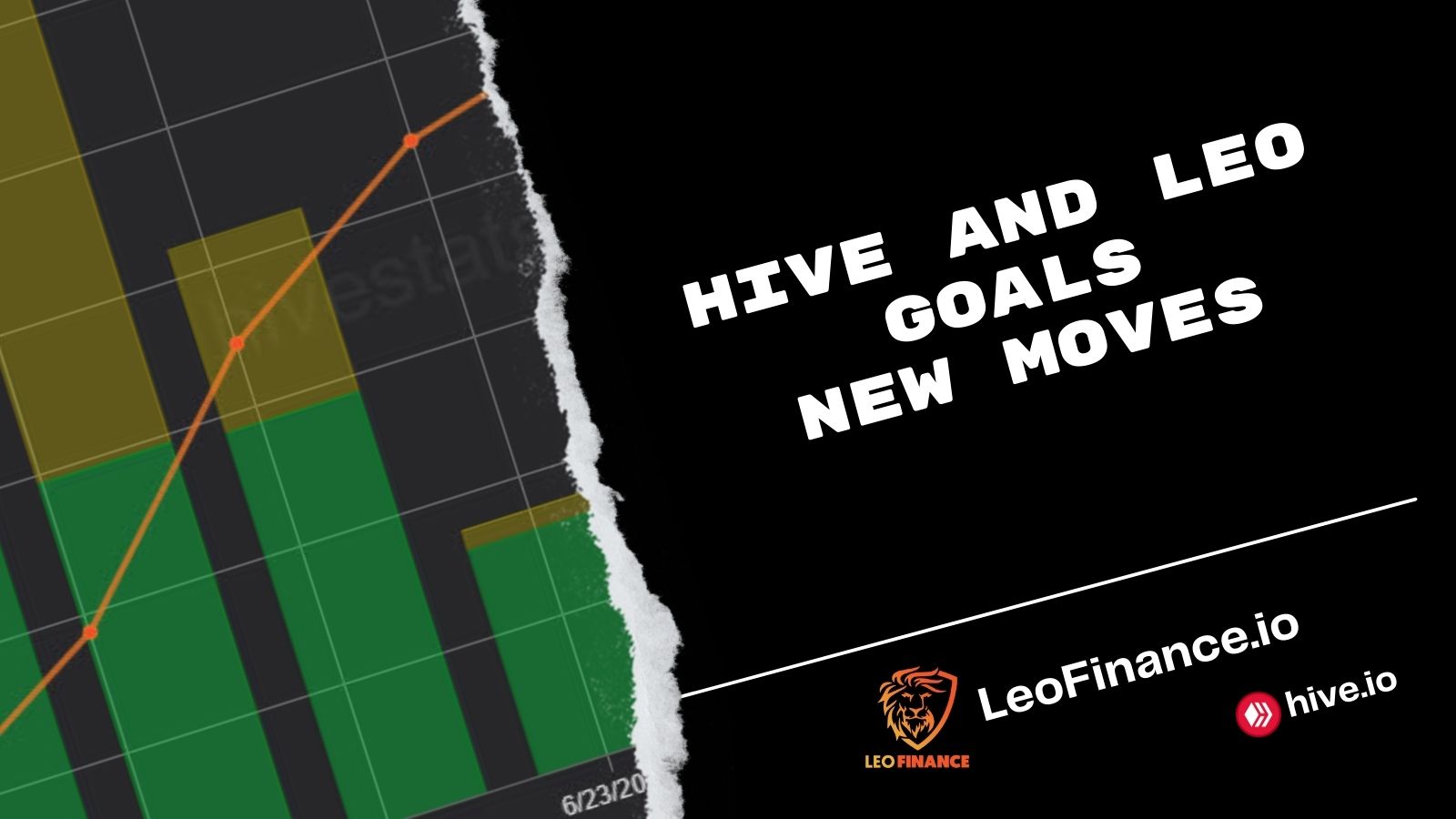 Each week I take a pulse on myself to understand my growth here on the hive blockchain and make changes if need be. Those changes might relate to new projects, speculation or information I find out. It could even come from comments of suggestions of other projects. This is my way of keep myself on track and accountable as well as making changes and staying agile with my investment, time and resources.

This one climbed on me again by about 2 hive needed per day. Which is starting to get to the point of no return and will need to be one of my primary focal points this week. That means outsides revenue and other tokens will be converted into Hive which will be powered up. But hitting 122 is going to take some serious effort. At current rates I'm just scratching 50 hive a day worth about $20 daily which is decent but not where I want to be. I'm torn between fast tracking LEO or fast tracking hive at the moment but I'm leaning more towards Hive right now at these lower end prices which LEO could come from the DeFi platforms quickly if need be like CUB and PolyCub

As you can see I had some decent power up days but started to trail off and focus in other areas with that hive come mid week. I may need to adjust that back unless that daily number is going to get away from me quickly.

This number fell a bit again but not at the rate it was last week. Curation on hive and leo are weird. You make a higher APR voting for the big boy articles and much less when voting up some of the smaller new comers. I kind of wish that was flipflopped a bit. This also seemed to hurt my hive income as my APR rate for curation was around 9% - 11% and now has fallen to about 8% that one percent might not seem like a lot but it's actully a cut of 2 hive per day.

In any case I want to blast through this one quickly and get it done asap. I really want to hit that 75k goal so this will become a focal point again.

Another focal point on LEO for me personally is CUB. Right now I'm super stacking CUB thinking and totally speculative that it's a good investment for the long term. I can see the price climbing once Polycub features get added in and it wont take much there to make some decent % gains on the $0.03-$0.04 a token right now.

I don't really have a goal for this one however I wanted to include it as I believe it's one of the new layer two tokens that's actully got some value and use case behind it. ListNerds seriously took off and it's been a great way to get some exposure over on to my articles just like this one.

Mainly Listnerds is pushing some seriously huge CTP tokens my way and also listnerd tokens my way on the daily. The only drawback right now I've noticed is there's a huge amount of email now coming from people and often times when I send my email it can takes many hours and I think in one case a day before it gets delivered. That kind of puts a negative on my LEO posts as they are seeing it after the 24 hours in most cases for curation.

I'm also tossing this in here as all last year and still I've been pretty heavy in wax in terms of gaming. This mainly stemmed from Splinterlands being cross chain. Since then I've gotten into a few games and lucked out on a few of them buying NFT assets for 200 wax and playing with them for tokens and selling them for 1,000 wax. I've also started to use some other exchanges for wax to compound those earnings through fee collection and liquidity. I believe it's time to start converting some of that into Hive, LEO and Splinterlands assets on scale. Doing so should start quickly boosting those Hive and LEO numbers weekly.

What's a primary goal you have for yourself with the Hive / Leo tokens?

Some great moves there. Well done!

Well done buddy, keep it up. Upvotes are becoming scarce for me lately and it's a real grind trying to squeeze a few Hive out of each post. I used to get much more upvotes a few months ago but took a 3 moths break and now am back at only 10% of what I was getting before. The whales left me after I stopped posting for a while it seems. Ah well, we can keep trying to claw our way back to some previous payout levels in Hive.

There is a bit more competition in the rewards pool, but I love your goals and they seem attainable!

Yep for sure but I love seeing it because that's what really grows the strength of these tokens. More people, more use cases and the same if not less to go around. We should see values including

Nice update, you have good goals and targets, wishing you all the best.

You have great goals and you are on track towards them, wow! Congrats!

We need more HP as a community in order to flex our muscles in terms of governance and the DAO.

Totally agree on this another primary reason I've been stacking it faster again.

I've been thinking a lot about this lately. I didn't really have a hive goal but with Splinterlands taking off again I now have about 30k dec per day coming in and I'm thinking it might be time to export some of that into 50 hive a day. It so hard not to just buy more cards right now though. They are so cheap and those rental APRs on many of them are insane.

Honestly I'd wait till after the airdrop is over. The other thing is you could convert your DEC to packs and after Chaos sells out you might be sitting on a gold mine of value in just selling the packs on open markets after. Of course not investment advice but that's kind of the play I'm going with right now. 30k DEC a day is awesome I'm only pushing like 3k lol I really should be putting more cards up for rent.

btw do you use something to easily be able to rent out? Right now I find myself checking markets and doing it one by one which is pain stakingly long!

If you're playing and renting from the same account, I recommend setting up a second account just for rentals. It will save you so much sorting time to just know every card in this account gets rented out always.

As for tools, I use peakmonsters. I can't deal the Splinterlands site.

I chunk cards together because most cards of the same classes go for similar amounts since its bots doing all the renting.

So I'll take similar class cards like gold rare cards, select them all in peakmonsters and then load the lowest price. There's no way around looking through them though.

Once I load up the prices I will click through them and be sure they are all priced where they need to be. Many are super easy. Like I know most gold rare cards right now go for 20ish DEC. So if they are there, I don't have to do much more than glance at them.

If something seems off I investigate and make a mental note of my findings for next time.

Once all the cards I have are on the market, about once a day I go through and check to see what's moved significantly higher than my price to see what I need to cancel and reprice. See the image for a quick tutorial of how I search it. 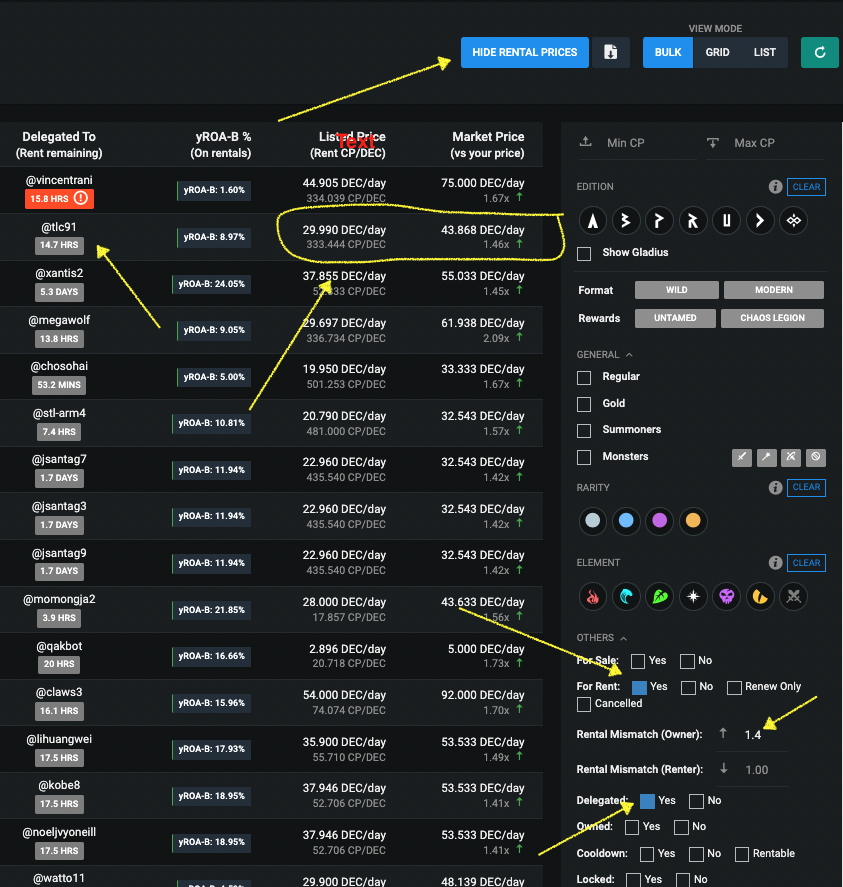 I cancel almost everything where I'm at least 40% under priced. I usually check to see if its a long term rental before I cancel and then make a judgement call based on several factors that would take too long to explain.

Over time you learn also that some cards don't lend themselves well to this strategy. For instance if I know a card usually goes for 60 dec and mine is rented out for 60 dec but the new floor is 400, I'm not going to cancel mine. Chances are some anomaly happened and you missed it. But again, mental note in case I keep seeing it.

Over time you get an idea of prices and trends and you can start doing most of it at a glance while only having to jump over to Splinterlands to research a few further.

Then I keep some track of what I have on the market that just isn't renting and eventually I'll lower it. I'll let them sit there for a few days before I change them though.

But yeah. Peakmonsters wins and use that load lowest price button responsibly. It's a great tool but used carelessly it will rob you blind

boom that's huge thank you very much for this!

You have got some great strategic moves man you are amazing

Great goals for hive and leo and you are pretty close to it. All the best for your goals.

I jumped on the LN wagon about a couple of weeks ago, I'm still getting the hang of things but I am excited, the future looks bright through the ListNerds glassed :))