In life we ​​have not been used to obtaining things in the short term, if there are long-term riches very few that continue that way. This is one of the great weaknesses of people who do not think long-term and less invest.

In our education since childhood, money management has not been taught, it only gives us money to buy a candy or whatever we want, but there is no teaching to invest or save it, we continue to grow, we do not see that education either in school, or high school or college, the vast majority of words are study, get a job, and retire. But because there is no such type of education, which is of great importance to many, there would be another mentality of investor, entrepreneurs, to think that investing today for tomorrow is ensuring a future.
This time I want to tell you a beautiful story about a girl about 10 years old for an egg she became a millionaire.

Once upon a time in a field a 10-year-old girl lives in a very poor house, her father works day by day to pay for expenses, her mother is a housewife, one day a man is passing by selling ice cream, her father watches her call her He says, take daughter, buy yourself an ice cream, that girl took the money, she was thoughtful, let the ice cream shop pass, she said aloud with this money, I can buy an egg, become a millionaire.

The next day she goes so that her neighbor who sells eggs, buys one, asks the neighbor if she has a hen made, the lady tells her that she does have 3 chickens, the girl tells her that if she can put her egg in some of her chickens so that he can give her a chick, the neighbor laughs and tells her what occurrences but accepts she lets the girl place the egg in the hens.

The girl's egg hatches a cute chick, to which the neighbor takes it and gives it to the girl. She takes care of him and raises him, the girl now has a beautiful hen, which she takes back with her neighbor, asks her for the favor that if her rooster cannot step on it, the neighbor agrees to her request, she places the hen so that mates with the rooster. A few days passed, the hen began to lay an egg every day, having 12 eggs the girl placed the hen that incubated the eggs to produce chicks. 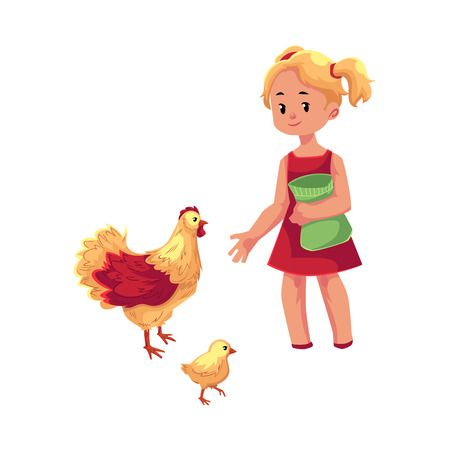 On the 21st the girl gets 12 chicks plus the hen that she already had, her thoughts were that with that she would have a beautiful farm. After 7 months the girl has a large chicken coop that begins to produce eggs by having 12 hens and a rooster, every day the hens lay an egg daily equivalent to 12 eggs a day, the girl begins to collect it then sells it near her community to various businesses, every day he goes out to sell, from there he gathers his first profits.

But since the girl's dream is to have a large farm, she collects money, until a moment comes when she sees that she has to buy two small pigs, a male and a female, where she feeds and cares for them, just like the business of pigs. chickens. After 10 months the girl observes that her pigs have already grown, she can mate and obtain several piglets, a few months later the pig gives her 5 piglets. Seeing that the piglets are growing, she gathers to buy materials and grow the pigpen, after having the materials she asks her father to help her build it, the father tells her that he will make her a pigpen on weekends for your pigs.

Seven months later the girl has a larger pigsty, and places the pigs on sale, a man arrives and tells the father to close the contract for the purchase of several of his pigs, the father answers the buyer that the businesswoman is his daughter, is the one who has managed and raised all the animals that he observes. The girl continues with raising her chickens and pigs, selling eggs and pigs. The girl, having a large amount of money raised, makes another investment but she buys a cow but pregnant, 10 months later the girl has a cow and a calf plus she hers another business of hers that continues to grow,

3 years after the girl obtained her first calf, the girl already had several cattle, a business buying and selling pigs, chickens, eggs, those derived from cows. Now the girl is a farmer where she came to achieve her dreams and continue to grow, having the knowledge that investing in the long term can achieve her dreams.

That she would be of the girl if she bought an ice cream, perhaps today she would continue to be a poor woman and only with never a dream that was never fulfilled. But she knew that with those pesos that she gave her, she could start her own business and one day have a large farm that could make her a millionaire. It is for them the great importance of teaching our children investment and saving, that through good administration they can become a millionaire, that in life we ​​have to make great sacrifices so that our dreams are fulfilled,
that you have to have big dreams and pursue it, fight for them, a good financial education will pay off.

A long-term investment mind will make your future get good profits, if today you have a golden goose that generates your income, keep making it grow and do not kill it, keep growing and make your big dreams get it, you only have to be consistent and persistent.