I recently found another great website (https://www.splintercards.com/) dedicated around the Splinterlands game created by @tehox. It has a lot of cool features including a calculator to Estimate the upcoming SPS Airdrop.

The Splintercards website certainly is on to add to your bookmarks of Splinterlands related websites. It allows browsing all the cards in the game seeing their price history in a chart and filter them by abilities which makes it useful for anyone who wants to learn how to play or find the cards they need to improve or balance their collection perfecting their own playstyle. 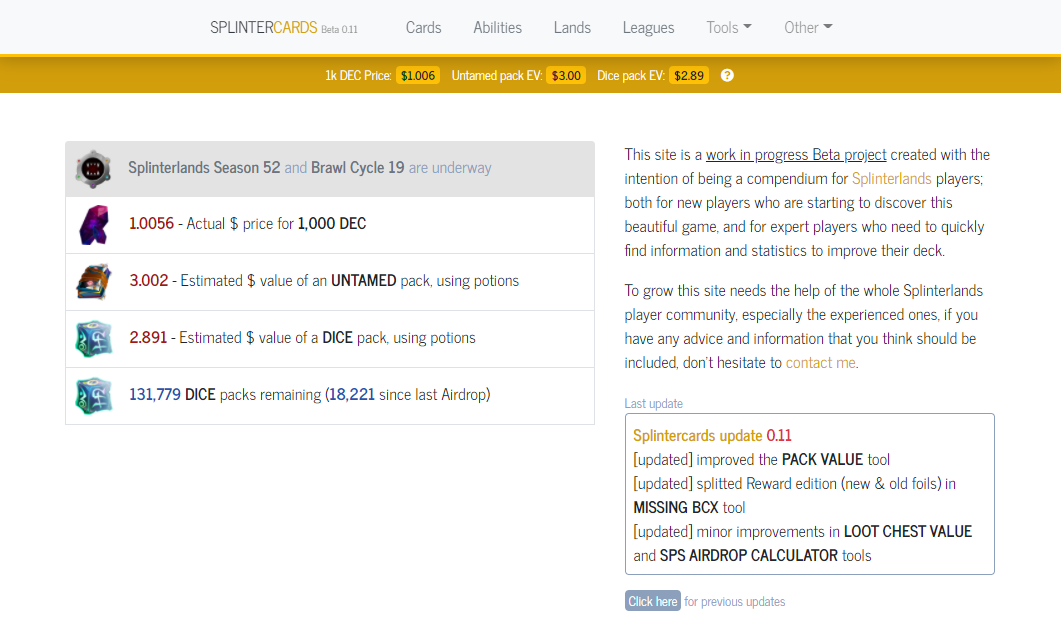 One of the tools on the website is a calculator for the upcoming SPS (Splintershards Governance Token) Airdrop which will start soon and will last an entire year each day dropping tokens to all accounts (that have bought the 10$ Summoner's Spellbook) based on all the in-game assets they are holding. 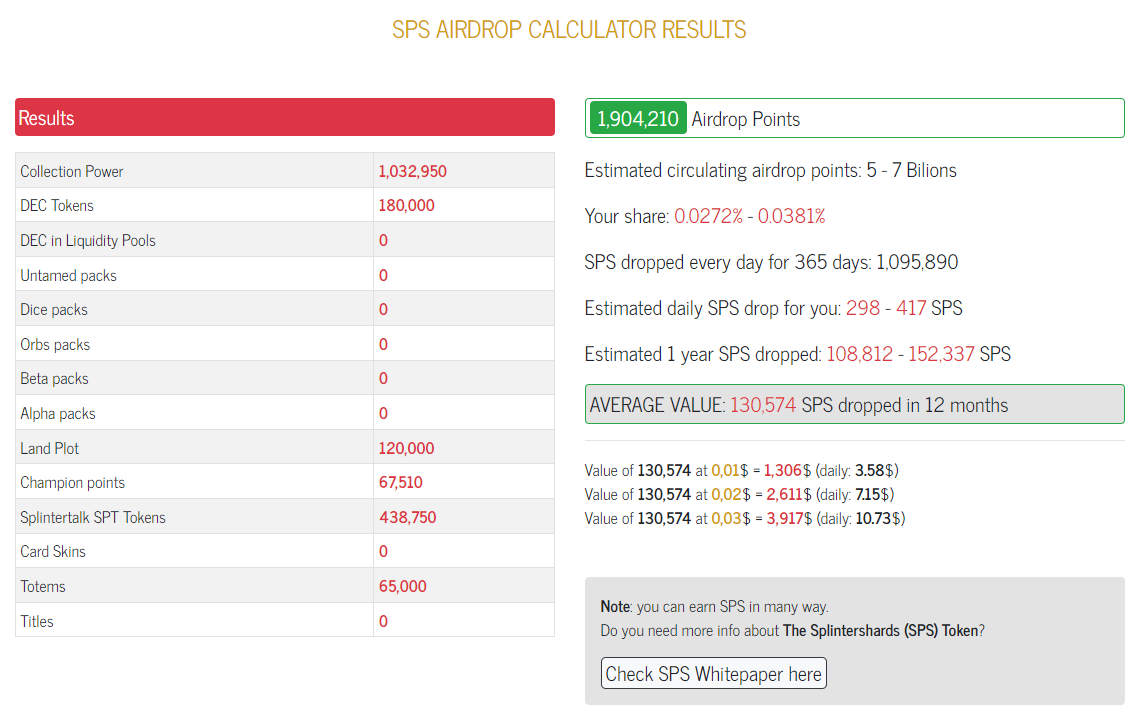 Based on the calculations, I will have just shy of 2 Million Airdrop points which should drop around 300 SPS Daily when taking the low-end of the calculations. Especially my accumulation of SPT tokens (see I'm Buying More SPT Tokens!
) really boosts my score giving a nice extra use case for those.

If I'm not mistaken, it was mentioned in one of the previous AMA's that SPS was sold to some private investors at a price of 0.017$ each! If this turns out to be the price SPS goes for, it will mean a daily airdrop payout of around 5$ which is quite massive. I do however doubt they will go for that much from my current understanding of the token. (See SPS Whitepaper for more info.)

The way I understand the setup for the SPS token is that it is mostly a tool for the game to get more exposure in the crypto space hopefully attracting new players as it will come with a listing on coinmarketcap. For as far as the actual use case goes, the main idea is that it will be a 'governance token' allowing token holders to have a vote in what happens in the game. A secondary use case will be that holding SPS will give access to promotions that are being done.

Personally (even though I believe it will all work), I'm (again) rather skeptical on the entire setup with the governance being merely a gimmick controlled by a couple large shareholders including the Splinterands team themselves. If they want real governance, they could have easily used the point system based on in-game assets as a way to grant the real players a vote without the need to create yet another token. I'm also not a fan of the setup where you need to hold tokens in order to get promotional benefits and feel it's just there in an attempt to give SPS some more use case.

The only potential value I see for SPS is if it ever were to come to a point where a part of the actual earnings from the game would passively be paid out to SPS token holders but I think that is rather unlikely.

Based on the total supply and the private sale price, the market cap would be around 50 Million Dollars which feels too much just for some governance and extra benefits. I would not be surprised if there was more selling than buying happening as a lot of tokens will get airdropped to existing players while there isn't that much of an incentive to buy or hold the way I look at it. This is crypto and I'm quite sure many will want to get their share of the airdrop and rewards which will certainly help to keep the price of all in-game items up for at least another 8+ Months.

I wrote 2 weeks ago how I saw Splinterlands being in an Euphoria Phase and I pretty much remain in a mode where I'm slowly taking some profit here and there on DEC earnings & Duplicate cards while balancing my collection with an eye to keep playing daily for at least another year. I'm really curious how the SPS token will play out enjoying the process of following all development that is going on while remaining quite frustrated with the actual game as the gameplay mostly comes down to the Pay2Win aspect with no signs of this changing anytime soon.

For more Info Around the Splinterlands Game see...