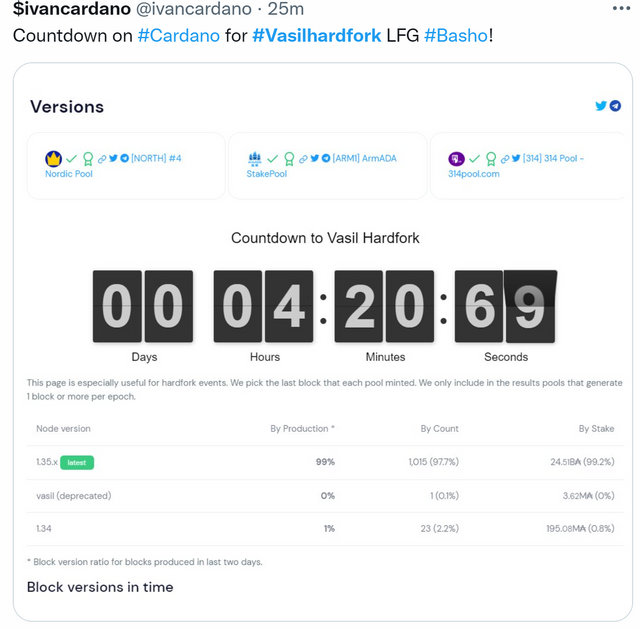 Later on tonight the Cardano blockchain will undergo the Vasil Hardfork which is nearly 3 months overdue. The first announced date was the 30th June which soon turned out to be a false alarm as bugs were found. Kudo's to the team for resisting the urge and making sure what they were adding was trouble free.

What is interesting to know is Cardano has a very different type of Hardfork than what we know on Hive. They have a HFC or Hardfork Combinator technology which allows them to over to the new protocol without any restart or interruptions so no downtime in involved. The new protocol is used keeping the history of all the old blocks. Sounds pretty cool and didn't know this as I thought all hardforks were the same.

The aim of this Vasil hardfork is to speed up transaction times, reduce the fees and help increase the scalability of the Dapps. One would have expected a slight increase in price but how often we see nothing happen at all. Most development only adds to the value and is only realized much later on. Buy the news and sell the rumor when it is 3 months overdue isn't going to happen.

I am not someone who has done much research into Cardano as it is only a small bag of my portfolio. The thought is the team was way too slow and it would take years to get anything done. This however seems slightly different as now Cardano DeFi should start to take off. The lower fees and the launch of DJED the stable coin for Cardano is imminent and expect that to appear within the next two weeks.

Cardano has a market cap of over $15 billion and is ranked at number 8 which is quite amazing considering what do they do? Up till this point Cardano (ADA) has rolled along creating no waves and has been no threat to other Cryptos ranked higher than them. 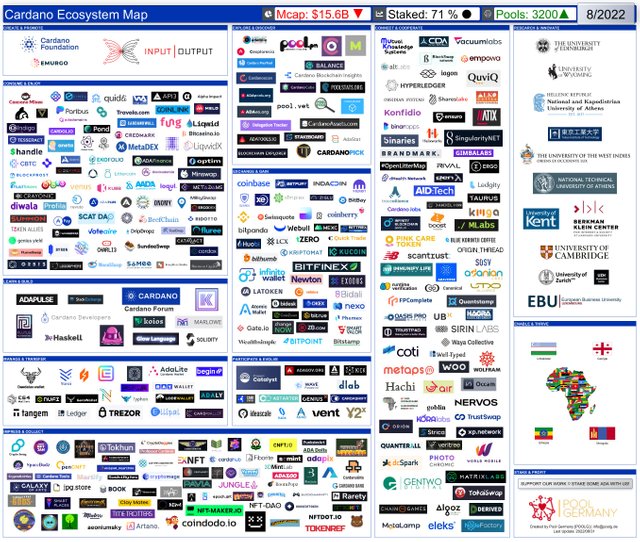 Just looking at the Cardano ecosystem we can see how big it actually is and would take forever to research what they have going on. 71% of the circulating supply is already staked and may actually be a good time to buy some more. There is too much happening on this chain to ignore and it has to start to increase in value at some point. The DeFi system I believe is going to unlock quite a bit of price potential.

I see on Twitter, many NFT artists leave ETH and join Cardano due to enormous difference in fees! This trend says something!

Yeah, I kind of get what you are saying. It doesn't feel like ADA does much of anything, but there are some really big eyes on it. Usually when I see a story about a business investigating how blockchain and help their business ADA is inevitably name dropped. Should be exciting to see where this takes the token.

This topic catch my attention

I just bought a few because it was in the top 10.

I also think anything that has to do with defi is just going to end up in this.