DANNY is one of the originals, he bought up several land plots when they first became available during the first Axie Infinity Land Sale and I think he's probably pretty happy about it too. Talk about a massive BEP. He tipped the scales on this one for sure!

Check out this last YUGE sale he made!

These were Genesis plots which were not originally directly for sale on the market, you had to be lucky enough to get them in a crate because they would only drop randomly with a percentage based on the type of crate(s)/plot(s) you bought. 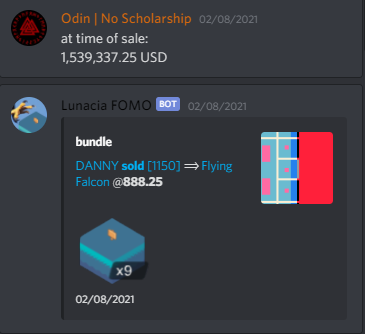 1.5 MILLION DOLLARS! IN ONE SALE!!!! Flying Falcon figured that Axie's Genesis plots were valuable enough to spend a FORTUNE on them, apparently.

I'm pretty sure I haven't made a third of that in my entire life of working for a living hahaha cries but that's life in crypto! You see whales blow more money in a day on digital collectibles than you'll possibly spend in your lifetime. It's kinda sickening in a way but also very inspirational. After all, if they have that much money to throw down on digital land then it's only a matter of finding a product these types of people want to buy, and sell it to them.

...the early bird gets the worm

Which is why I will remain vigilant in my quest to find more blockchain games in their beginning stages and invest whatever I can afford into them and hope they do as well as Axie has. Hopefully, someday, I'll get lucky and some of said NFT's will go up 1000x in value.

There is still a chance of yeeting some profits off of the Axie market though, if you're clever enough to watch for signals and trends. Buying and selling items/land at the right times can yield some fair profits. There will also be another land sale at some point as only 1/4 of the land has been sold thus far.

Axie's volume has been nothing to sneer at either, have you been paying any attention to this game? If you haven't, once you realize what's been going on then you'll regret not getting involved the first time someone told you about it ;)

These numbers went back to zero just 8 hours ago.

Therefore, if you haven't even as much as looked into Axie yet, do you even crypto, bro?

Join the Axie Infinity Discord to get more information about the game.

P.s. I have a few one-of-a-kind Axies for sale that could turn over a nice profit if you're patient enough to hold on to them. Check out my inventory.

The dank tank Max HP Frosty with Yam is by far the rarest and will likely be worth the most later, it's for sale on OpenSea right now for .5 ETH because I need funds to do some altcoin buying! LOL

Let me know if you're interested in playing the game and I can walk you through to get you started. It is rather pricey (for many of us) to get going right now with ETH gas fees and most good Axies selling for 100$+ but you only need 3 of them and if you have enough time on your hands to play then you can earn it back through grinding SLP (Small Love Potions). Cheers!

Find me on Discord if you want more help.