dCity is growing! With the 3rd edition coming soon and updates rolling out we are seeing some big moves in cards buying and investing in the game.
Let’s check out the stats! 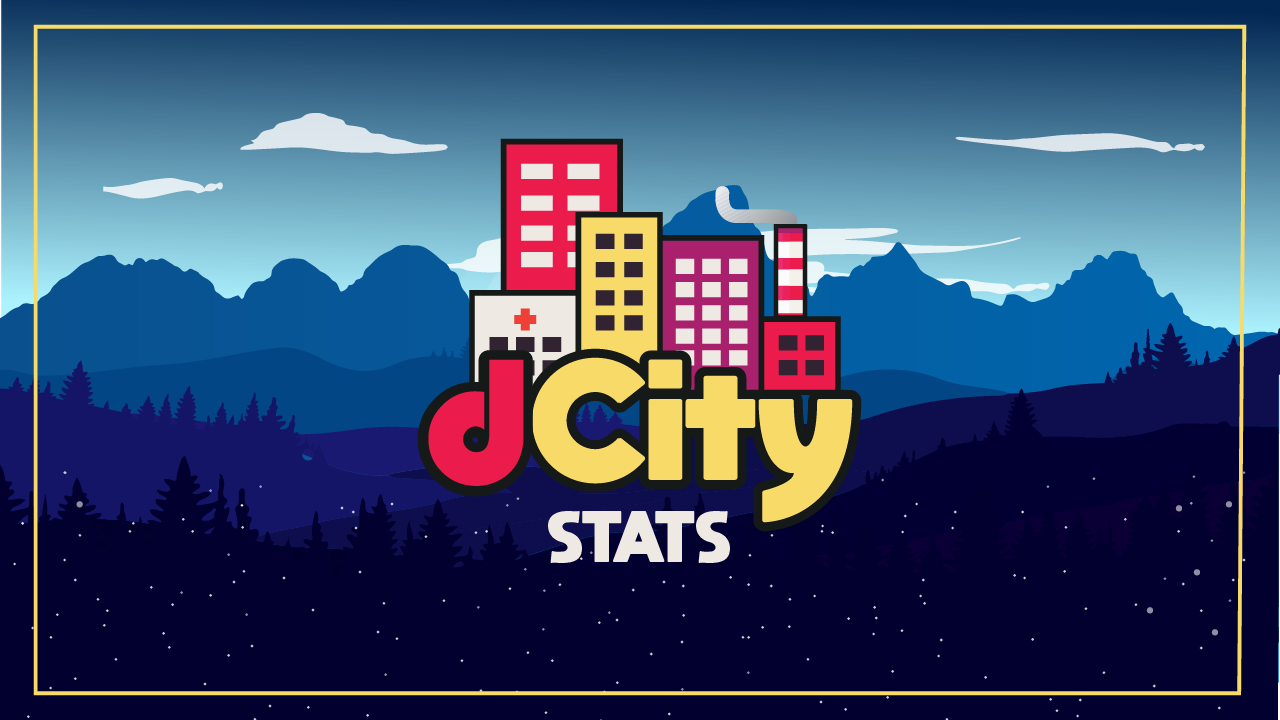 For those not familiar with the game, dCity is a city simulator game where players are buying NFTs in form of a cards, that represent buildings and then try to optimize their city production.
Players are rewarded with the in-game token SIM on a daily basis based on their city production. The top 400 players are rewarded with HIVE based on their ranking on the leaderboard.

Here is the chart of the cards issued per day. 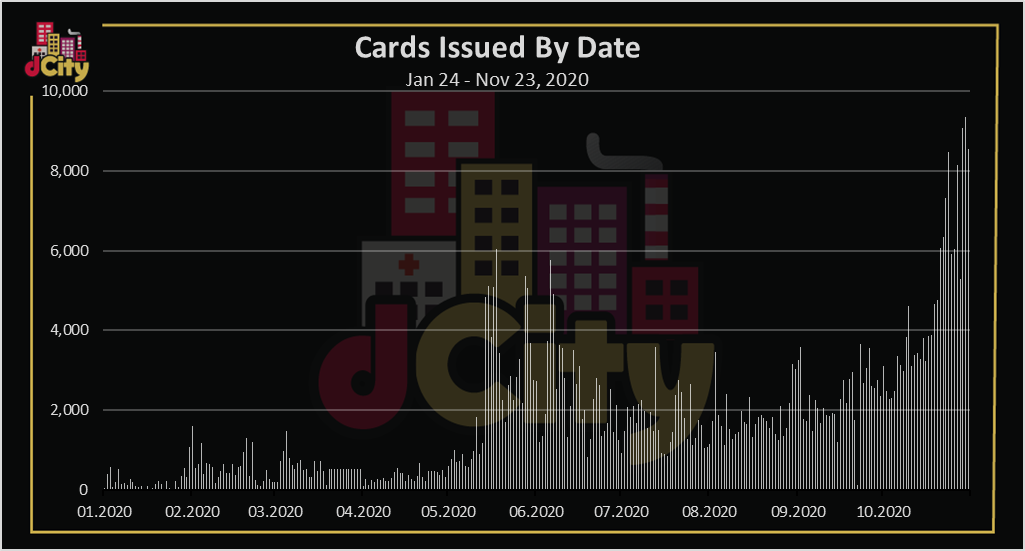 Well this chart tells it all. A massive spike in the last period in buying cards. There was a similar spike before the second edition and update, but this one just dwarfs that one. Its much bigger now. Almost 10k cards bough per day. As things stand these numbers might go even higher in the following period.

The chart above doesn’t include cards like immigrants, homeless and the other citizens cards that players get randomly. No tech cards as well.

Here is the chart for the top 20 players that purchased cards. 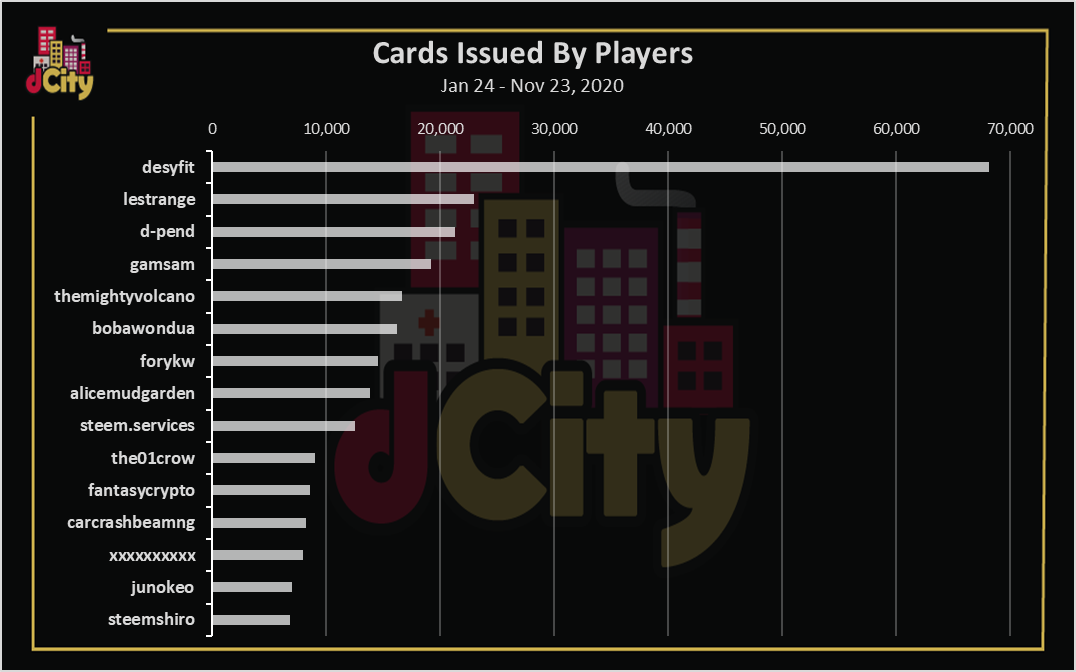 @desyfit is on the top with almost 70k purchased. Interesting he is not a no.1 player, so it means its basically for trading purposes. @lestrange and @d-pend on the second and third place.

There is a total of 1005 accounts that received a dCity card.

Here is the chart for the cards issued by type. 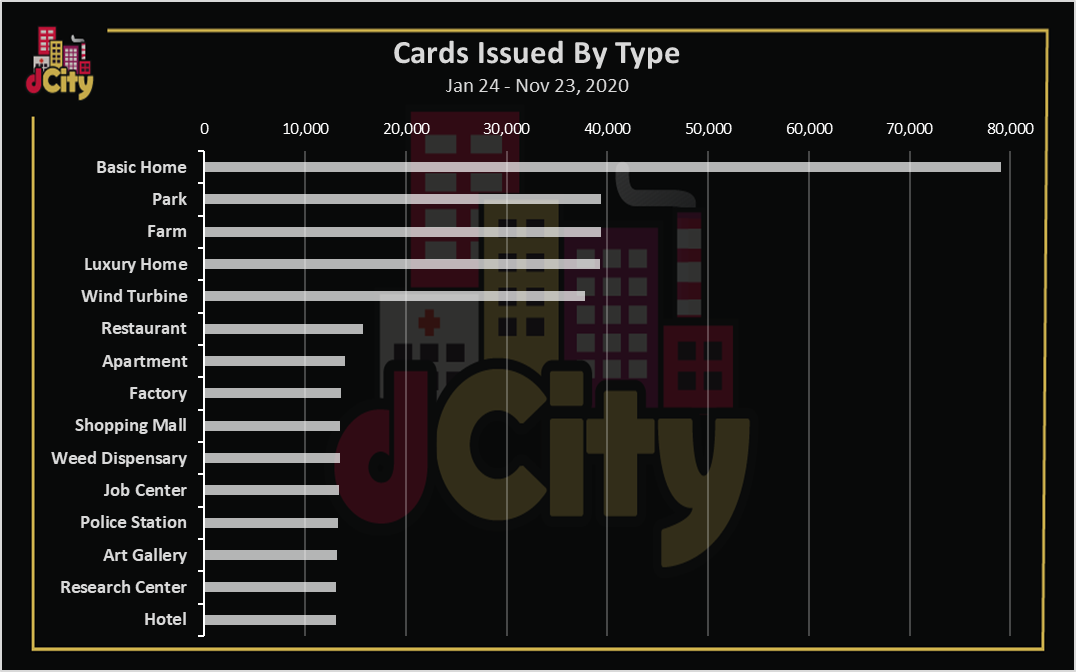 The number of cards by type is basically following the drop rate of the cards. The Basic Homes on the top with 80k cards circulating, next the Park and the Farm and then Luxury Home. Interesting Park and Farm are from the second edition so they have been bought a lot.

The above are basically the most common cards. How about the rarest?

Here the chart for those. 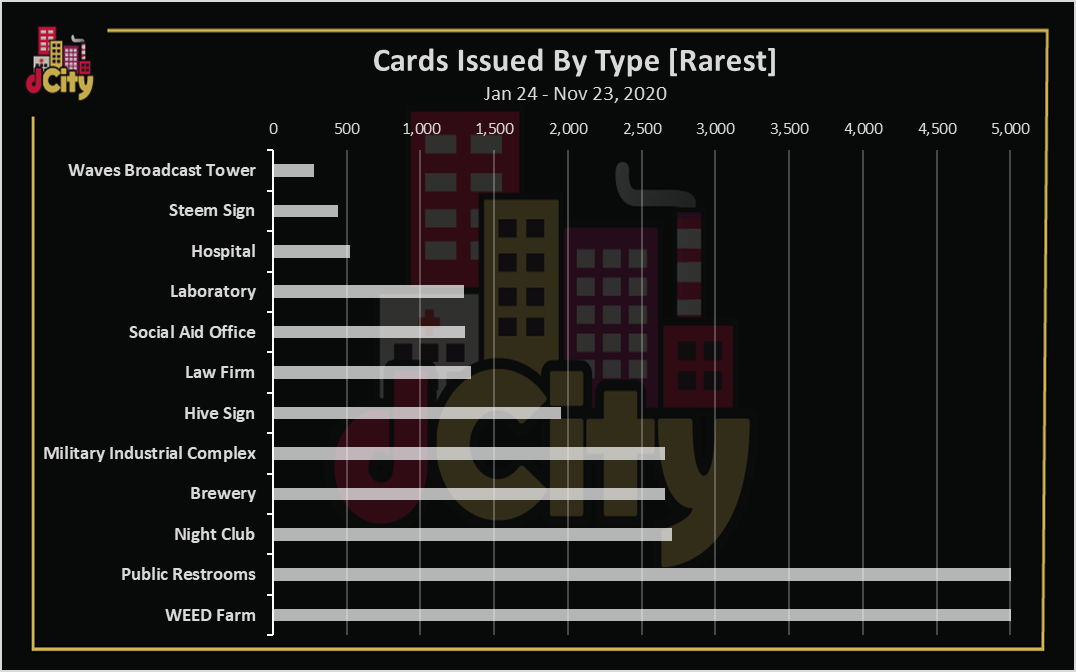 The Waves Broadcast Tower is the rarest card in the game. At least from the ones that are on from the house 😊.
The tech cards are rarer than the above.

Next is the Steem Sign, then the Hospital and Laboratory.

The game is rewarding its players with SIM on a daily basis. Here is the chart for the daily amounts of SIM rewarded to players. 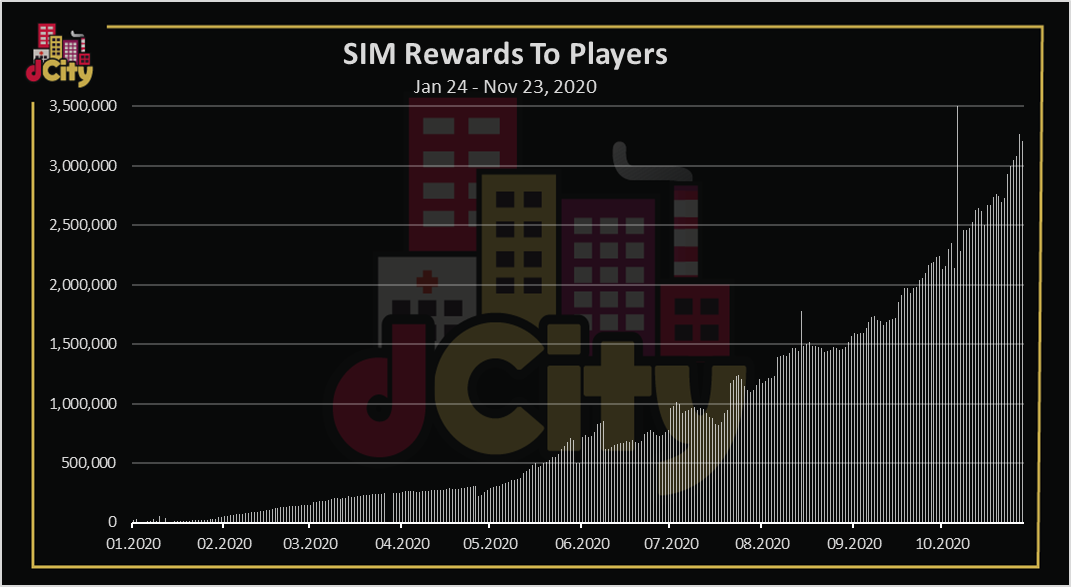 As we can notice the amount of SIM rewards has been increasing since more cards are issued daily that are bringing SIM to their players.

We can notice a slight drop in May, this is because of the tax introduction. It went up fast again because of new cards buying and players increasing their income.
In the last period the amount of SIM rewards in high since there is a low tax policy as well. More than 3M SIM is now rewarded daily.

How about SIM spent?
The chart for buying cards with SIM looks like this. 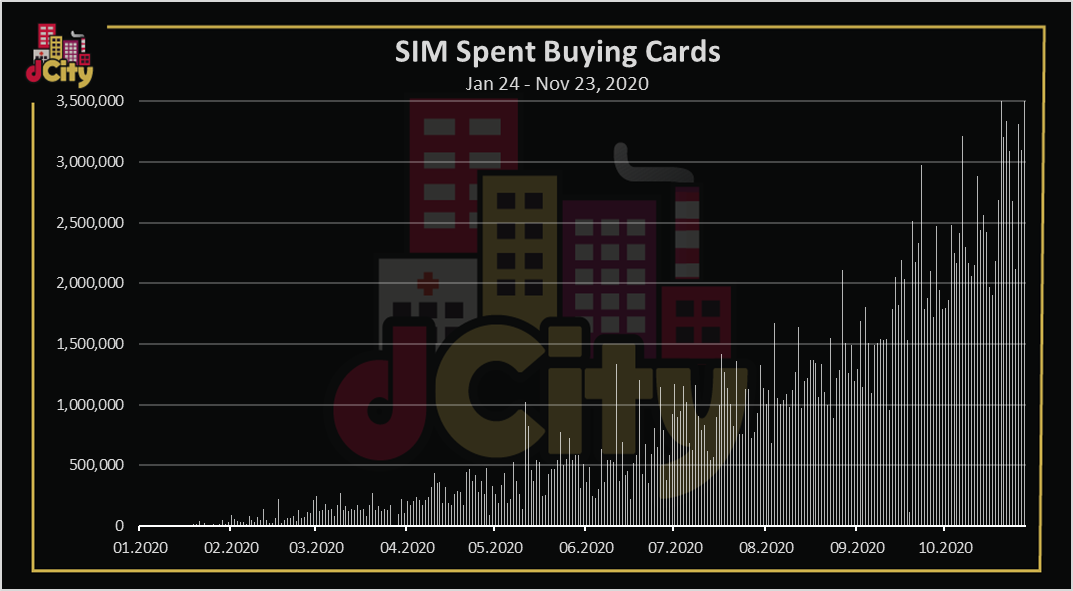 This chart keeps on growing as well. In the last days it has over 3M SIM spent per day. 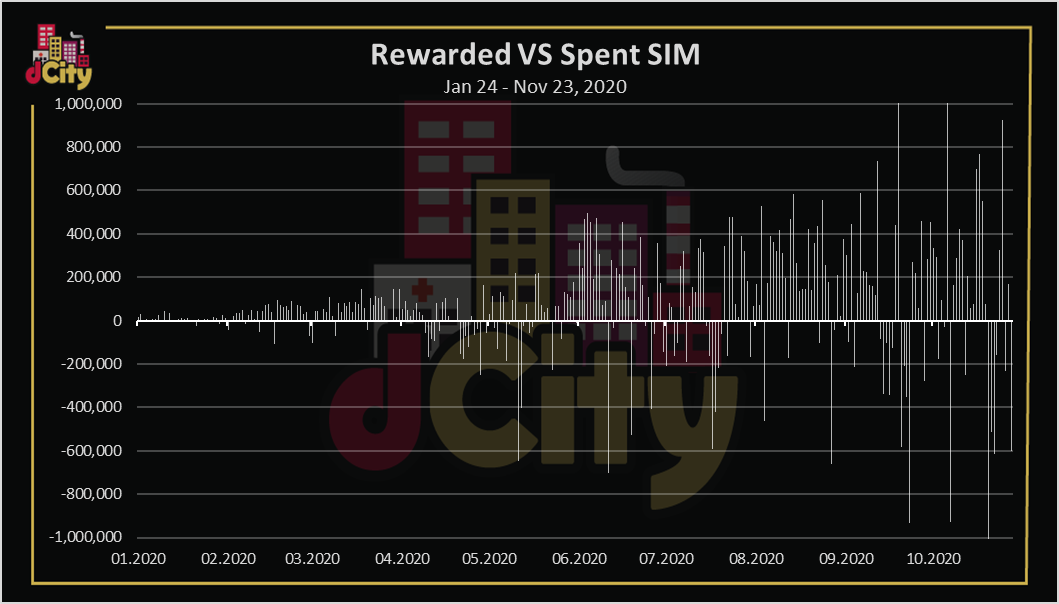 This is basically showing is how much SIM didn’t go back in the game and players kept it. Remember SIM is now governance token and players are holding so they can elect president that can set some parameters in the game like taxes etc. A hodling rewards were just introduced as well.

Overall, players were rewarded with around 260M SIM and at the same time around 239M was spent for buying cards. From this we can tell that most of the SIM goes back in cards buying. 21M was not spent back and players kept it.

Here is the chart for the top SIM earners. 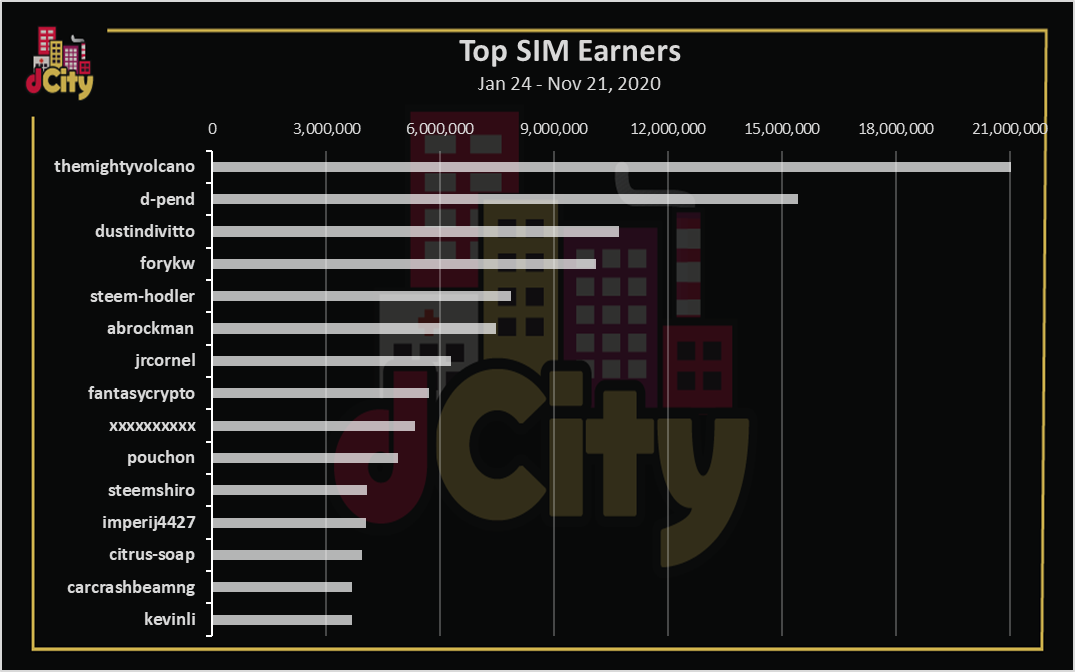 @themightyvolcano is an all time champion in earing SIM with more than 21M SIM earned.
@d-pend on the second place with 15M and then @dustindivitto on the third place with 10M. 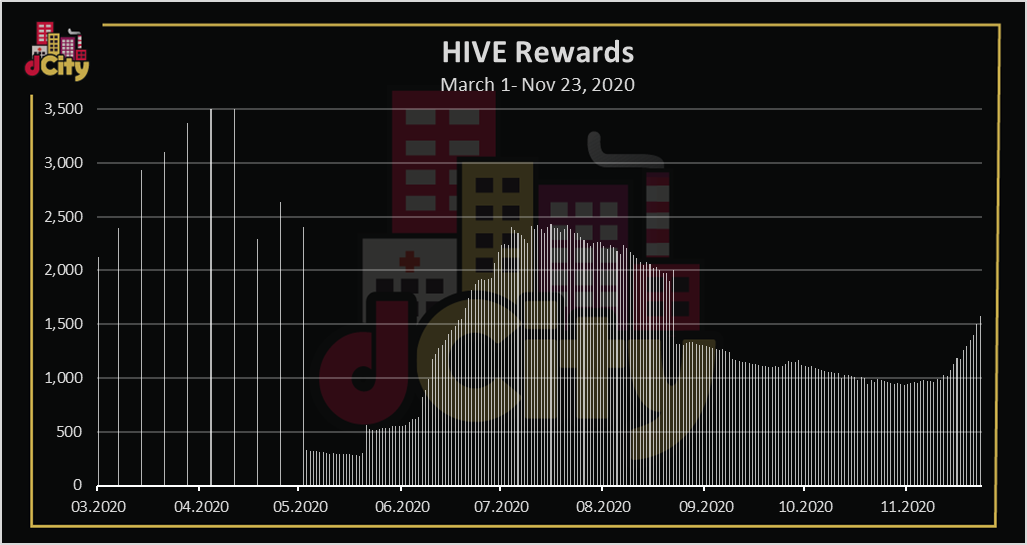 At one point there was almost 2.5k HIVE distributed daily. Then the payouts dropped a bit, and when the change from 1.5% to 1% daily payout was made there is yet another drop.

Now we can see again that the HIVE payouts are growing in anticipation for the new update. At the moment of writing this there is 196k HIVE in the rearward pool that is an ATH for the game. Previously after the ATH was somewhere around 160k. 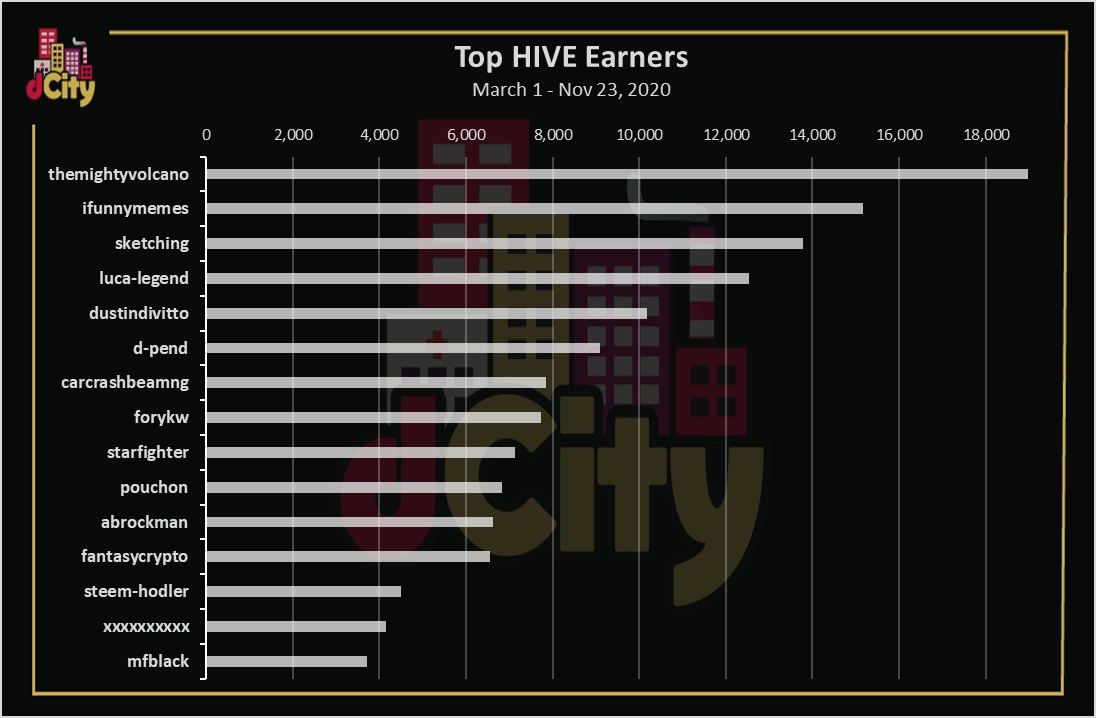 @themightyvolcano is on the top here as well, with 19k HIVE received. Next is @ifunnymemes an then @sketching.

The HIVE rewards are based on population, so there are accounts that are “specialized” only in this. But there was a change recently that lowered a bit the payouts for population only accounts.

Overall an exiting time in the dCity and probably an existing month going forward with all the update incoming. New limits will be tested 😊.