Hive Engine Is Getting Traction | Data On HIVE Deposits And Withdrawals

The volume on Hive Engine has been growing in the last month. Splinterlands has a lot to do with this but also the overall development of Hive Engine, like diesel pools etc.

Let's take a look a the deposits, withdrawals and the historical amounts of HIVE deposited on Engine in the year. 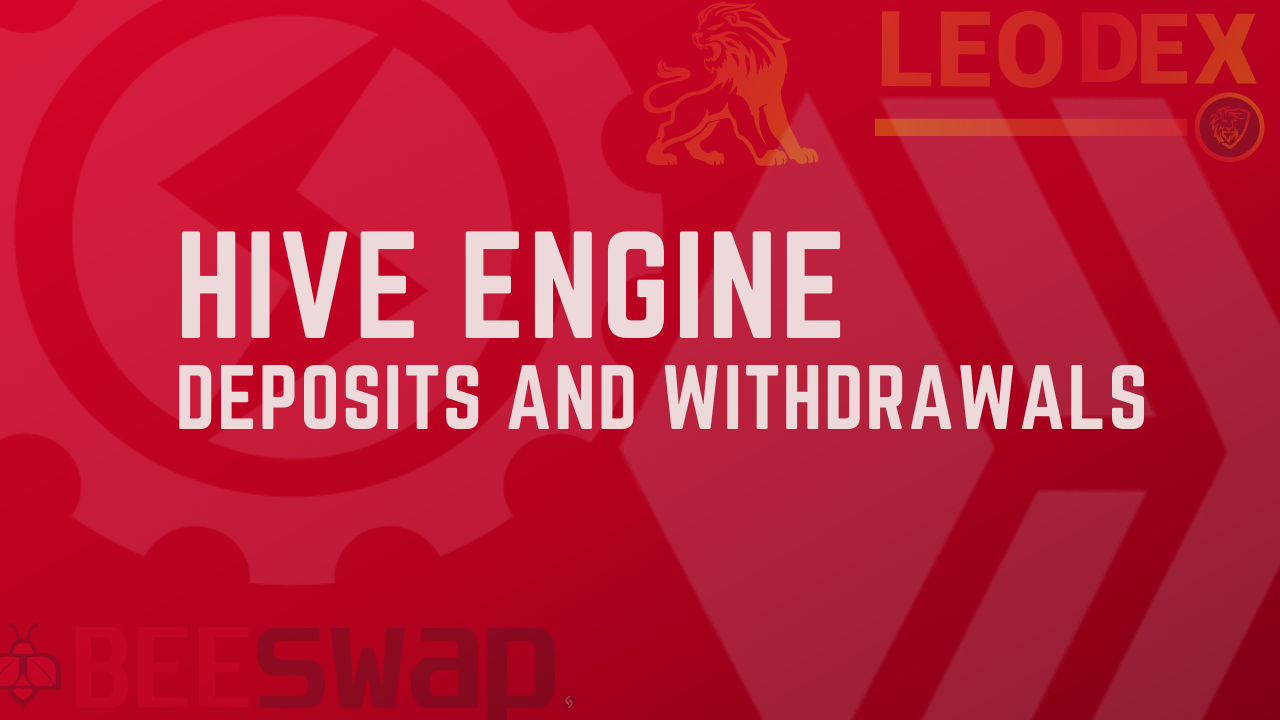 Here we will be looking at the volume that Hive Engine does in terms of deposits and withdrawals on the platform. It is a nice indicator of the state of the platform.

At the moment there are three major gateways for deposits and withdrawals on Hive Engine:

There are fees for deposits and withdrawals, 1% on Hive Engine and 0.25% on LeoDex and BeeSwap.

All the projects build on top of Hive are made possible by the custom_json data and Hive Engine. Splinterlands, dCity, Rising Star, CryptoBrewMaster and all the other games. Next the tribes, LeoFinance, ProofOfBrain, Palnet, Neoxian, Sports, Weed etc. The NFT platform NFTShowroom. Some other specific tokens like SPI, BRO etc. as well. Without a doubt Hive will be a much more boring place without Hive Engine and we should be grateful for it. This just shows the importance of the second layer.

For deposits we will be looking at the transfers to the Hive Engine @honey-swap account, @leodex and @hiveswap for BeeSwap. 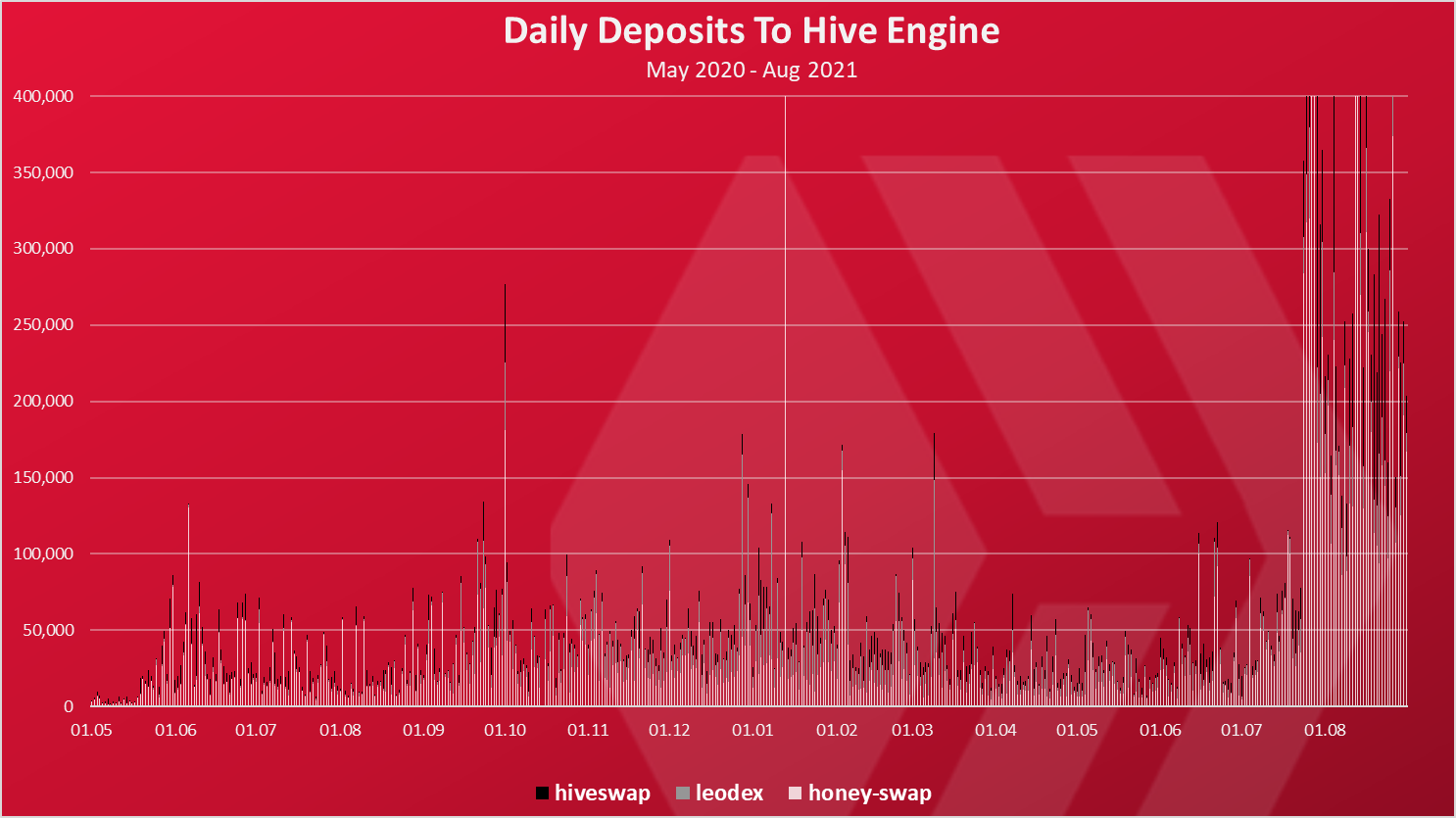 The daily chart is a bit messy with a lot of spikes and ups and downs.
We can see the clear huge move up in the last month. Up to July 2021, the daily deposits were on average around 50k HIVE, and it the last period they are on average at 200k, with a ATH at almost one million HIVE deposited in a single day.

A more revealing representation can be made if we look at deposits on a monthly level. 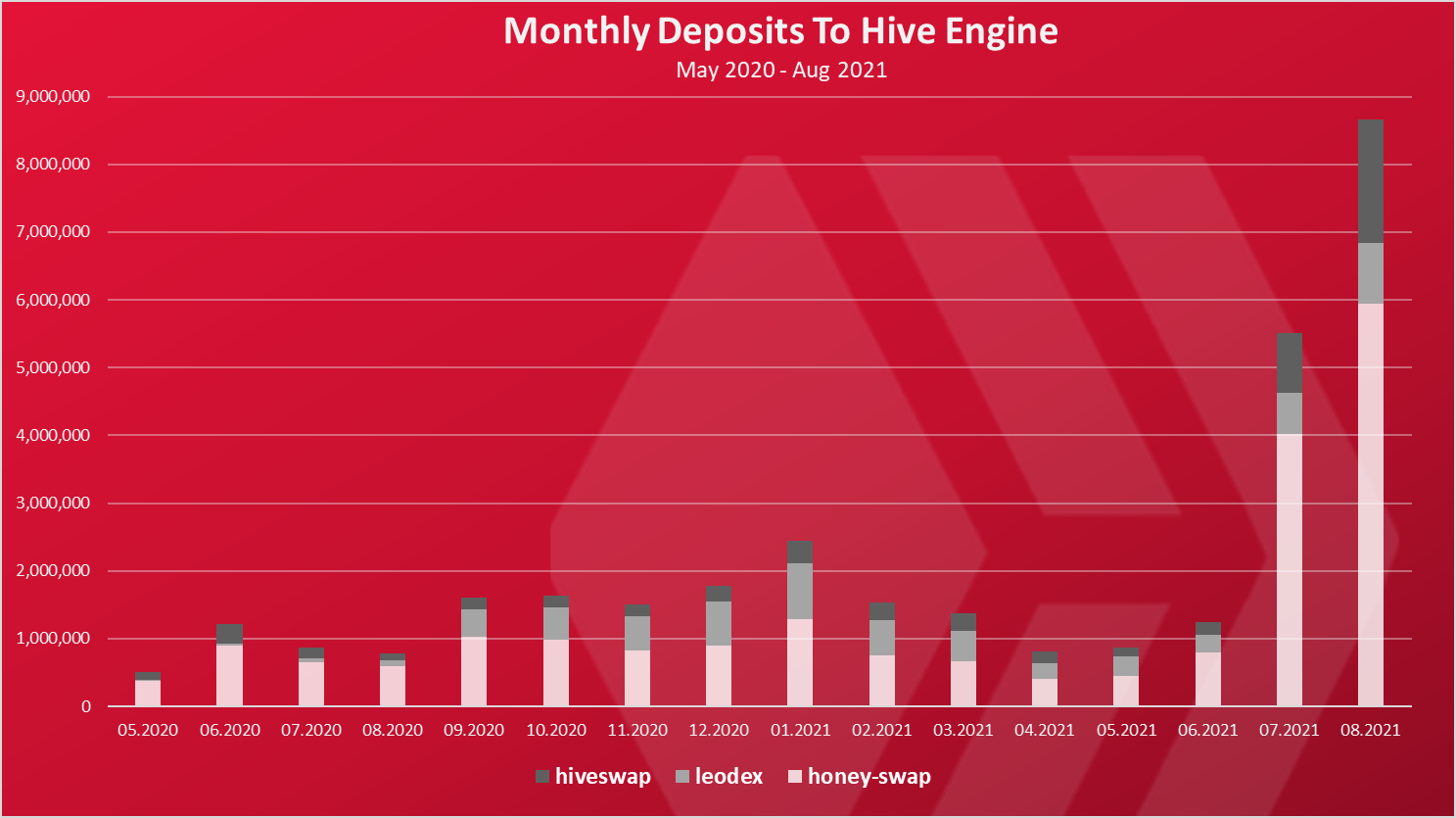 A better representation here.
We can see that July and August are having an immense growth. July had More than 5M in deposits, while August is even better with almost 9M HIVE in deposits.

Will see how this trend keeps up.

Who has deposited the most?

Here is the chart for the top accounts that deposited for July 2021. 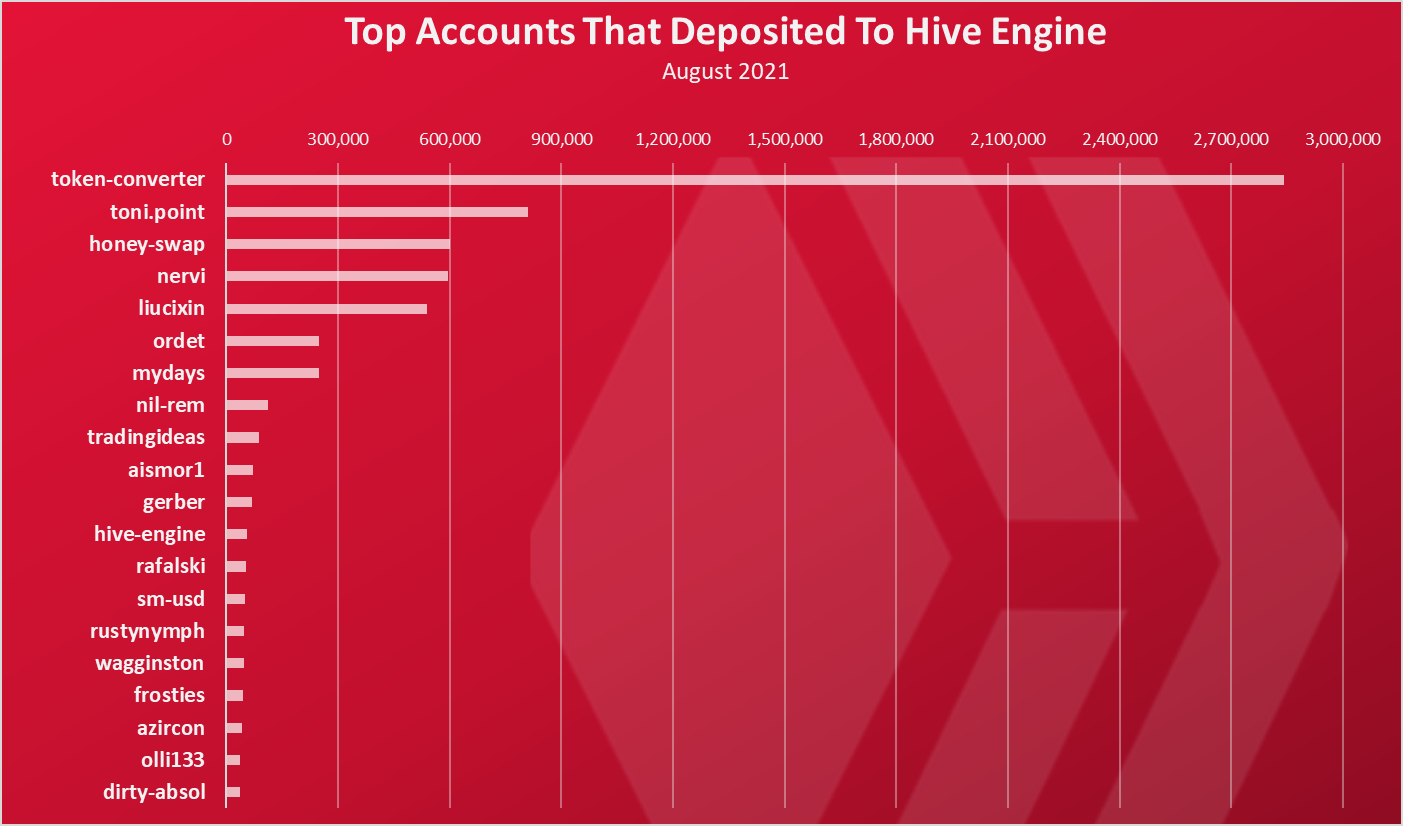 The @token-converter account is dominant on the top with more than 2.7M HIVE deposited. As far as I know it is a Splinterlands account for in game Hive. On the second spot is @toni.point. 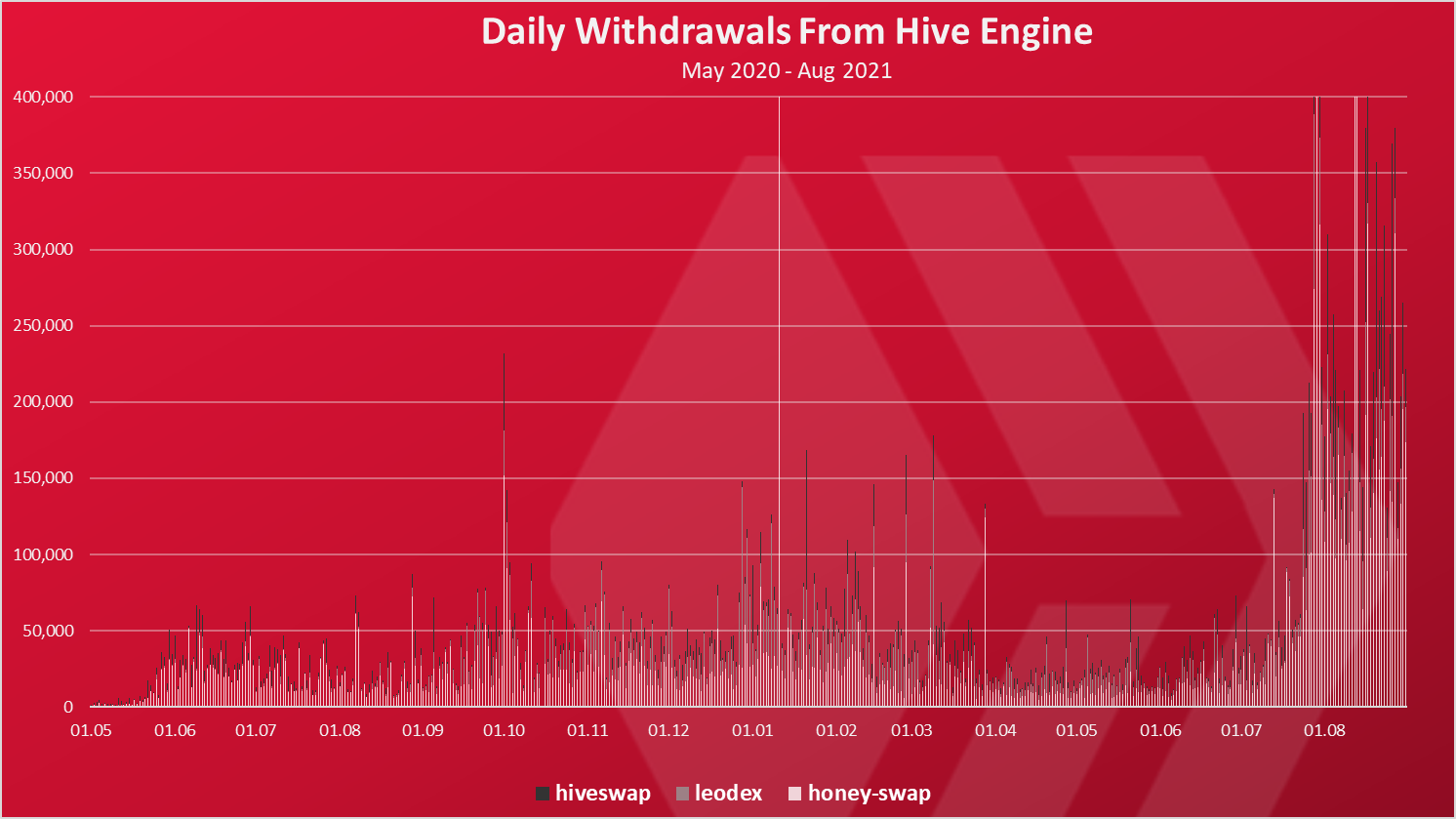 This chart seems to be following the deposits, just with smaller intensity. 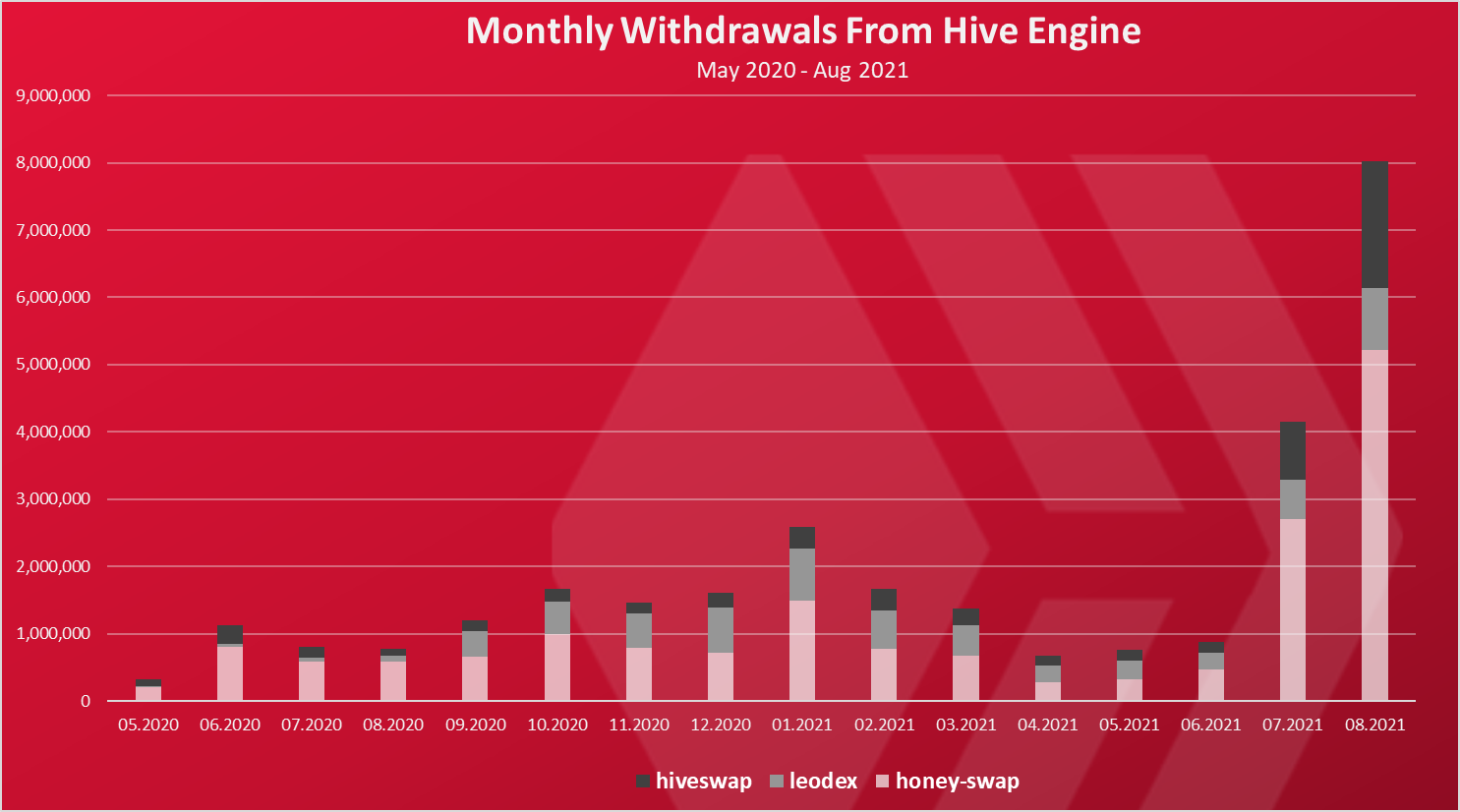 This is for all the three gateways.

Who has withdrawn the most?

Here is the chart for the top accounts that withdrew in the period. 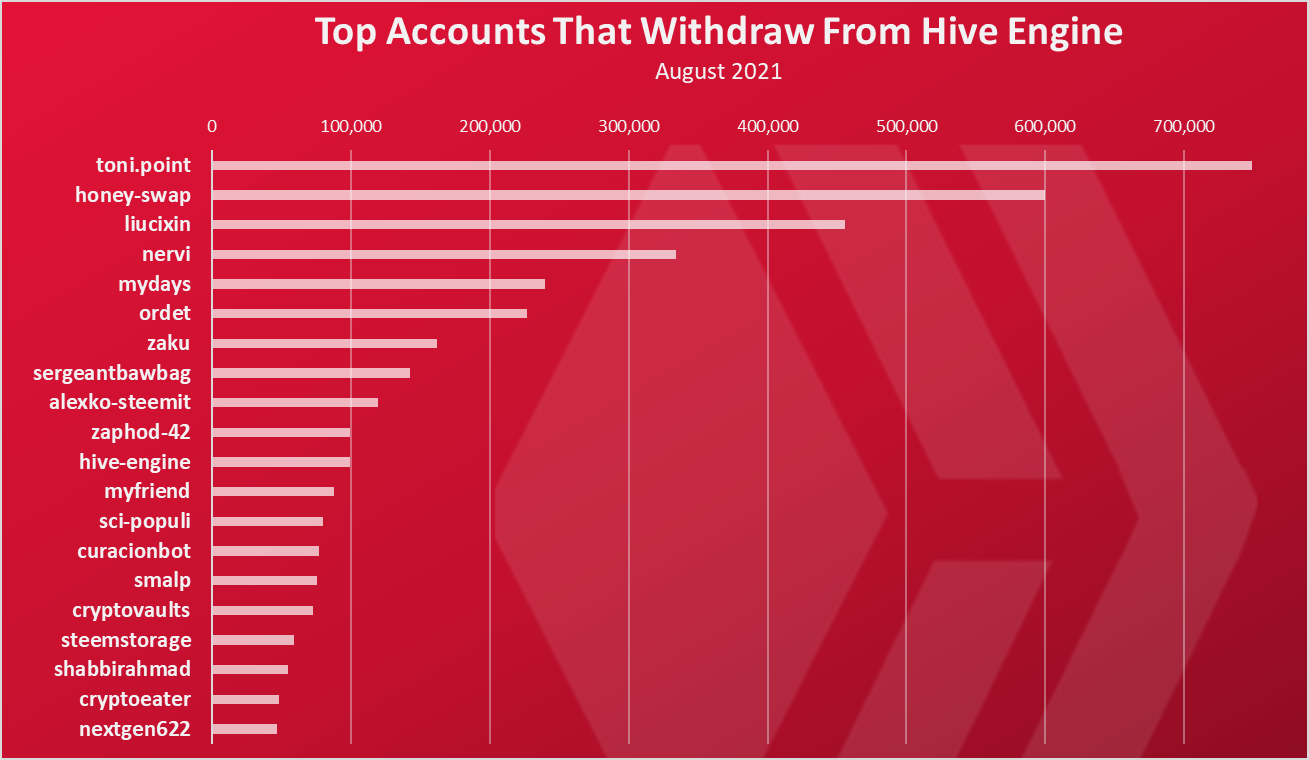 @toni.point is on the top with 340k HIVE withdrawn, followed by the @honey-swap.

Here is the chart for the share of the deposits of Hive Engine, LeoDex and BeeSwap. 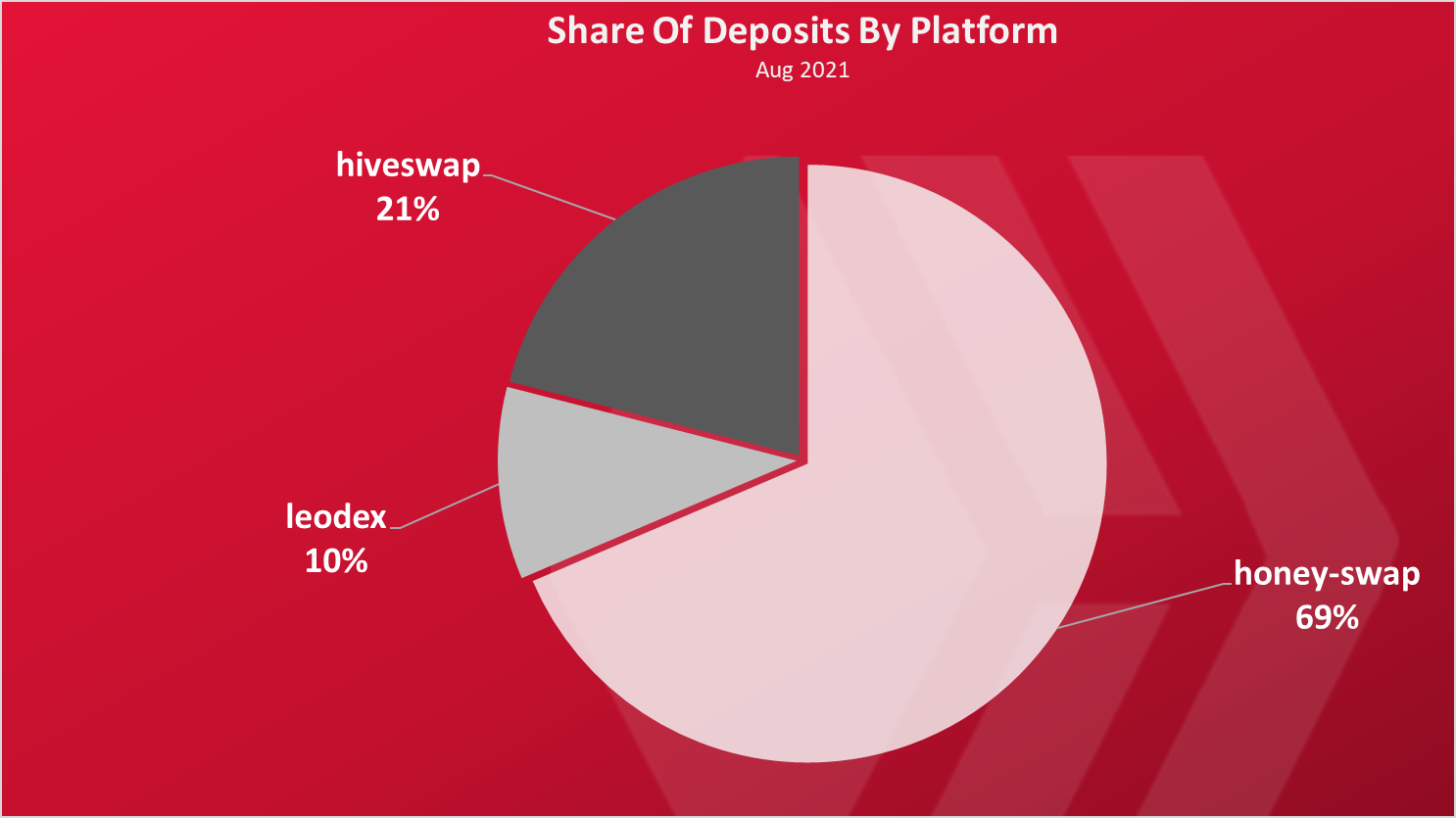 Although lower fees, the other two platforms have a smaller share then the official Hive Engine, mostly because of the high liquidity on @honey-swap.

Here is the chart for the HIVE stored on Hive Engine in 2021. 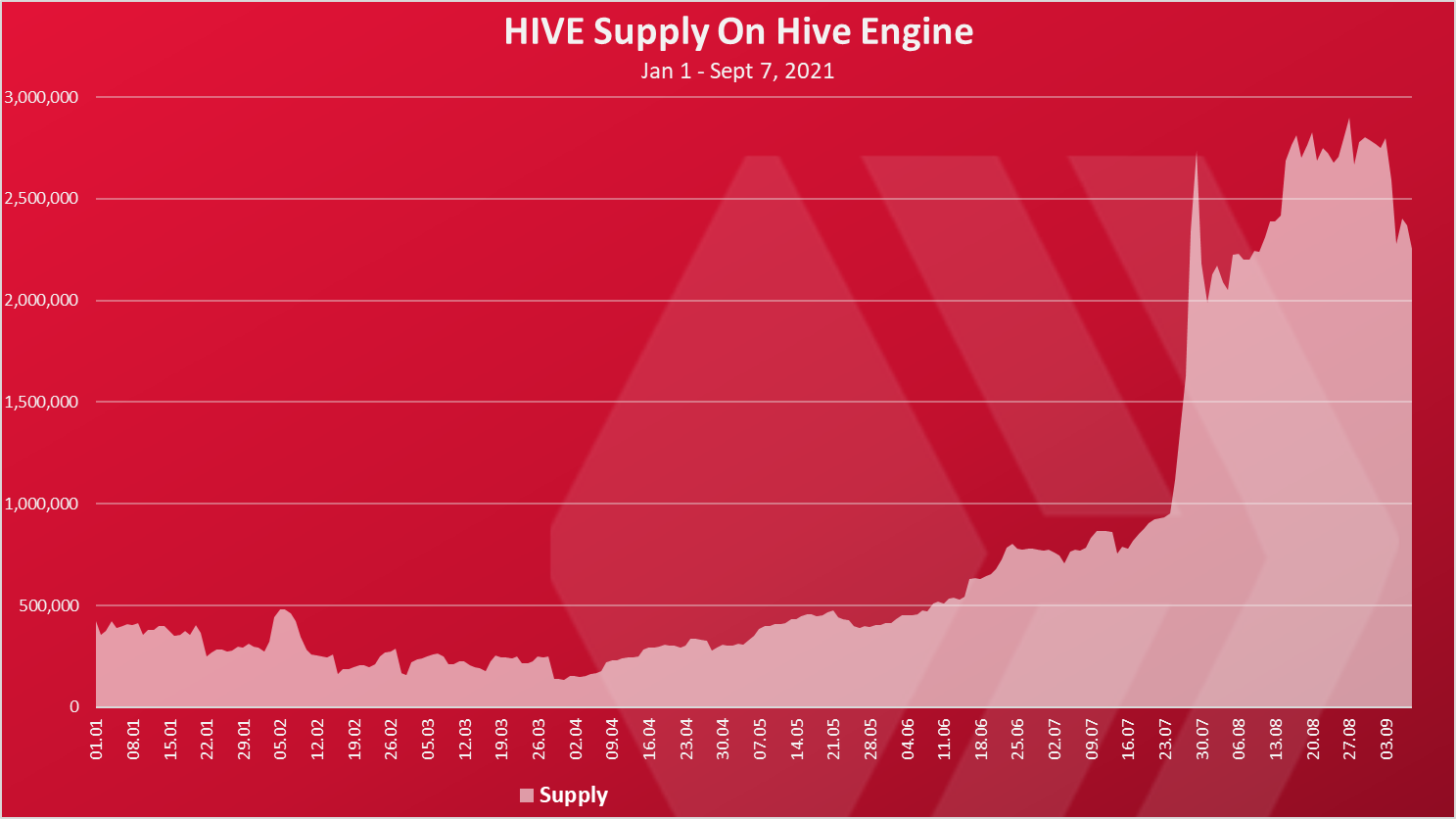 Note: This is a sort of reverse engineered data, from the current HIVE balances and then net the deposits and withdrawals over time. There might be errors.

As we can see prior to June there was under 500k HIVE started on Hive Engine. The it started to pick up reaching 1M in July and a very fast move from 1M to 2.5M. Since then, it remained on those levels, between 2.3M to 2.8M HIVE.
In the last days it has dropped, because of the increase in the HIVE price and people cashing out.