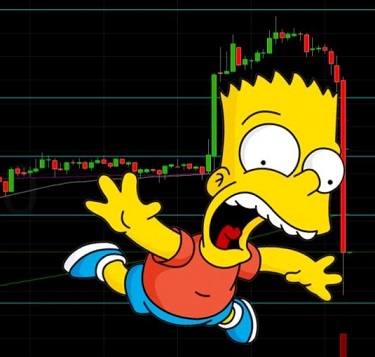 It's no coincidence that I wrote about market stability just two days ago. It was pretty obvious this was going to happen soon™.

Now that we are at $56k with zero signs of weakness, the chance of bouncing off $60k and crashing all the way to $42k is pretty low in my opinion. I believe the market has to get scary and unstable again before we see another dump. I'm now targeting $70k minimum on that front. A 30% retrace from there would be $49k, so I expect $50k unit-bias to hold strong over the next few months.

Now that the market has dumped we have a new anchor and analysis point to parse. What do we see?

We had the exact same flash-crash this morning as we did on January 3rd when I started flipping out the entire month. The only thing different this time around is that I'm not going to lose my shit. Seriously though the percentages work out perfectly.

Proportionally these two dumps are exactly the same.

Both of these flash-crashes are essentially 20% dumps with quick recoveries. The sharks are using this extra volume to load up fat as the bears panic sell at all time highs again.

Just rewind back to January 3rd...

So where do we go from here? If we repeat the same pattern we'll make a 50% gain from the lows of the dump. What a coincidence that this number 47k x 1.5 is pretty much $70k.

Or maybe even $70.5k if we are being exact. Same difference. Again, the 30% retrace from there pretty much takes us back to $50k unit bias. Bull market stronk.

The mega bubble year of 2021 has yet to disappoint. If we had been telling people back in September that Bitcoin would be trading above $50k in a few months hardly anyone would have believed it. Here we are, and now those same people are greedy as hell just expecting more more more. People never change.

If these timelines play out again, we have another insane week of bullish action ahead of us up to $70k before the bears get baited into dumping again. Should we try to trade this scenario and make some money? That's wholly up to you. Personally the Diamond HODLER is still in my head so I'm not really in the gamblin' mood at the moment.