After I yesterday discussed the fact that HIVE was holding daily support that had been in play for months, I just wanted to address the following comment:

"Way to not answer a thing. Actually I didn't even see a point. I feel like I lost 2 IQ points reading this post. Thanks
All of you listed below.. why are you upvoting this? There's more information on a sheet of toliet paper. smdh"

Thanks to the recent success that LeoFinance has experienced, there's a lot of non-trading people who have come across to share in the token's success.

While this is obviously excellent for HIVE and the LeoFinance community, it does lead to some misunderstandings and frustrations about the type of content published.

You see the thing about sharing market analysis is, it's always going to come across as lacking an exact point or lacking conviction.

But unfortunately when it comes to financial markets and making consistent money trading them (which is the sole aim of the trading game), there is absolutely nothing that's certain.

Nobody can Predict Market Direction

If you’re new to trading, you may think that a good strategy will be able to predict direction in the market.

This is in fact not the case. Anybody who says that they can predict the market are in fact just guessing.

Scandalous, I know. But it’s the truth.

Some will argue that as financial markets are simply a reflection of human nature, that they must be predictable.

But for a market to be predictable they need to be 100% efficient, but at their very core human beings are unpredictable and inefficient.

It sounds bad but it’s actually these inefficiencies however, that allow us to make consistent profits trading.

Trading is About Playing the Odds

Trading is in fact all about playing the odds.

It’s about trying to take positions that in the long run, will offer you the best chance of consistently making money.

You need to make it clear to yourself that you’re not going to make money on every single trade.

But by taking certain positions, it is possible to increase your odds of making money over the long term.

Having the ability to do this takes patience, discipline and full trust in whichever trading strategy you employ.

All of which are traits that aren’t as common in human beings, somewhat explaining why up to 95% of traders lose money overall.

In a zero sum game, that’s quite the disparity between the profitable and unprofitable!

How to put the Odds in Your Favour

So if you can’t predict the market, then what’s the role of technical analysis and why do I bother sharing my analysis with the LeoFinance community?

Because in the random mess of an overall inefficient market, there are still some predictabilities due to the fact they still represent human behaviour.

We can’t predict the market, but we can put the odds just that little bit in our favour and profit over the long term.

Think of it like a house edge in the casino. It may seem like the punters are winning, but the house edge always ensures that the casino is the one making long term, consistent bank.

Probably the most obvious of these predictabilities, is the fact that humans like doing business at prices that stand out.

Whether these are beautiful looking round numbers, or simply prices where there has been trading action in the past, it’s all reflected in what we call support and resistance.

I’ve shared my simple forex support and resistance trading strategy with the LeoFinance community before, going over concepts surrounding these predictable price points in detail.

But let's get into a few specifics.

An Example of how to make Money From my Analysis

Using yesterday’s HIVE analysis blog as an example, let’s take a look as to what you could do with such information that I share in my analysis blogs.

Here's the chart and key quote I shared: 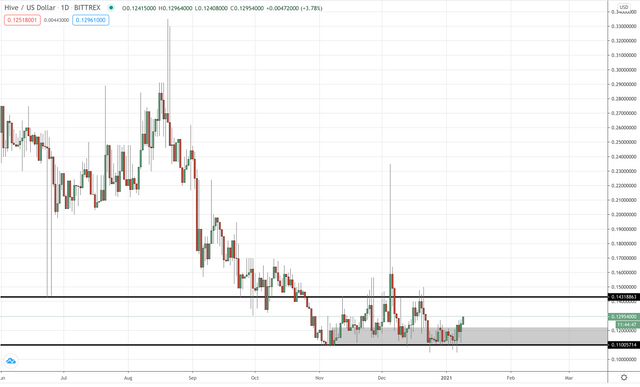 Interestingly enough, all of the support zones remain in tact.

So, is this time actually different?

Well, we obviously don't know whether it's going to bounce or go through the zone lower.

But what we do know, is that it's held up in the past and that buyers have used that price to get long.

We also could say that if we were to buy here with a stop loss just below the zone, the upside potential is much greater than the downside risk.

Take a look at the following trade entry with a 1:3 risk:reward drawn on top: 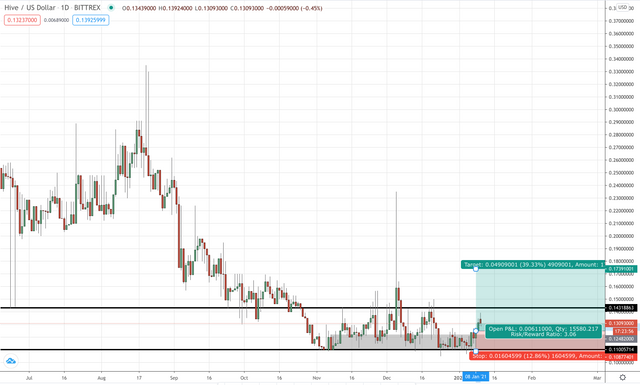 See how this example builds a picture, within the confines of my trading strategy, that helps put the odds in my favour?

This is just one such conclusion you could have drawn from that chart setup, with a ton of alternatives out there depending on the type of trading strategy you use.

I'm never going to give clear, directional trade calls because I'm telling you that I would just be bullshitting you.

Just like anyone else that shares analysis that says they know with certainty, which direction the market is headed.

My LeoFinance market analysis blogs are designed to share key levels where there's likely to be a reaction and for you to then be able to use them in making your own decisions.