The metaverse in augmented reality? 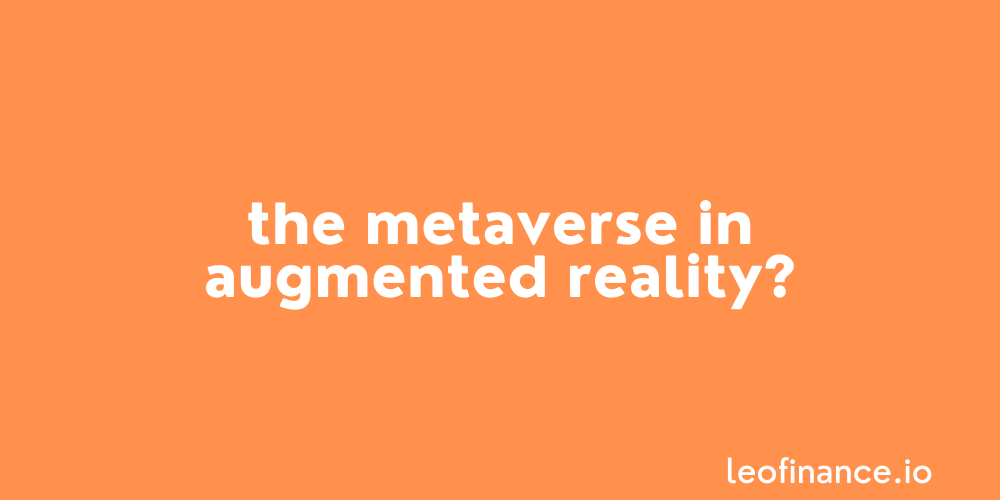 Fantasising about a future in which we are able to view and interact with the metaverse in augmented reality.

The crypto bear market doesn’t have to be all doom and gloom.

Depending on where you believe we are positioned along the hype cycle, this dip can actually offer investment opportunities to those of us who feel we had been priced out on the initial peak.

We saw one such example right here on LeoFinance today, with our very own l337m45732 taking up one such metaverse investment opportunity thanks to the record low gas fees we’re currently seeing on Ethereum.

The opportunity was to pay the ETH fees required to claim a plot of virtual land in a project called SuperWorld and his experience rekindled my optimism toward the metaverse and its potential to be viewed in augmented reality.

The idea of viewing augmented reality overlays of the real world

I’d actually never heard of SuperWorld before, but it’s essentially an augmented reality overlay of the real world which you can view on Google Earth. 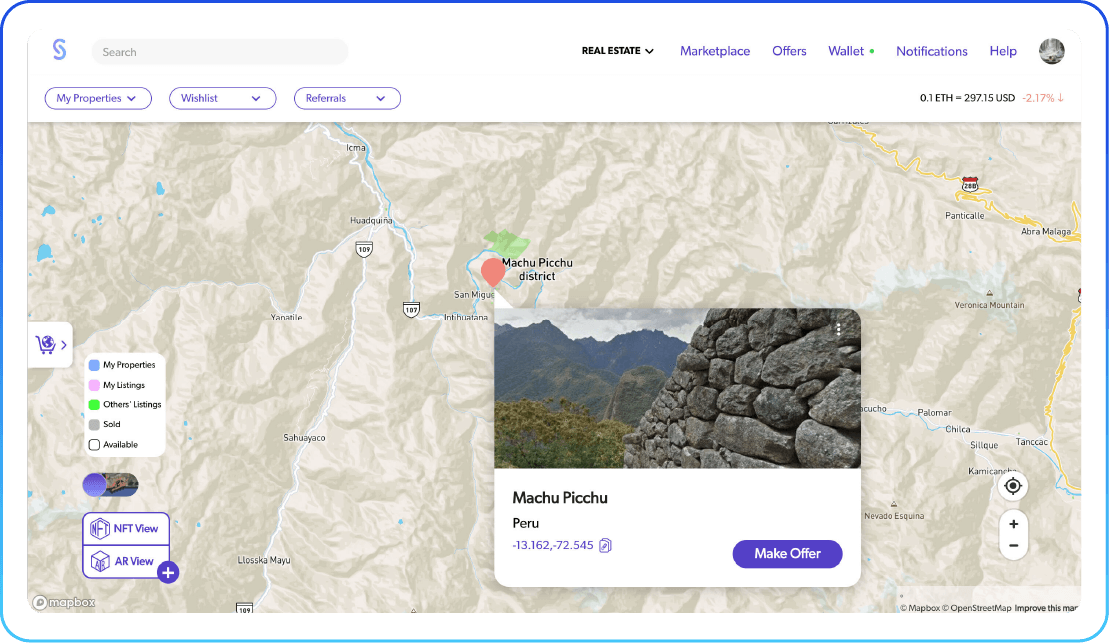 The idea is that via NFTs, users are able to buy, sell, and monetise the overlay world in whichever way they see fit.

If the concept of buying and owning virtual land in a geospatial augmented reality overlay of the entire world isn’t super intriguing to you, then really what are you doing in this space?

The idea gets my juices pumping and quite frankly, I’m super excited about the possibilities of viewing content or indulging in virtual experiences.

In my opinion, viewing virtual worlds that make up various aspects of the metaverse in augmented reality is going to play a substantial role in how people interact with the physical world.

All you have to do is think back to the way Pokemon Go turned nothing public spaces in the real world, into these crazy busy hubs because according to the game’s AR overlay, there were awesome digital monsters to catch.

Picture that being applied to entirely decentralised, open and free virtual worlds where people are free to build and interact with things in whichever way they see fit and the potential is endless.

Not only will this be possible on the go using your phones, but ultimately via smart glasses too.

Now I know that so far these devices have failed to catch on, but I’m convinced it will be a regular part of life in the future.

Ensuring the transition between the physical world and the metaverse is more personal and seamless than ever before.

How to best take advantage of owning land in the metaverse

I keep thinking about possibilities for how to best take advantage of owning virtual land that people can openly interact with in augmented reality when they walk past the real world location.

l337m45732’s thinking was to buy a plot on Easter Island because it’s a fascinating part of the world.

While you could certainly do some cool touristy stuff in that part of the world, it certainly doesn’t have the high foot traffic that I think could be easier monetised in AR.

An alternative strategy could be to buy virtual land in high traffic areas in major global cities such as airports, train stations and the like.

Think about it this way.

You literally have millions of people per year passing through these transport hubs looking for something to see or do.

Picture people flicking a button on their smart glasses and scrolling through the various AR overlays in all of the different digital worlds that make up the metaverse.

Just 1% of the foot traffic viewing and interacting with your billboards or experiences could potentially make bank if designed and monetised correctly.

The future potential of viewing the metaverse in augmented reality

As I said when I kicked off this post, the dip certainly offers opportunities for entrepreneurs and speculators like us to predict the direction of future tech and make some long term plays that may not have been previously attainable.

Granted that picking which project you want to own virtual real estate within is still extremely speculative and still ultimately relies on how the dApps themselves allow people to build on and ultimately interact with the worlds.

Picking the best crypto metaverse play to buy land or invest in the economy, is not an easy choice.

But in 2022, there’s no doubt the concept of interacting with the metaverse in augmented reality like this, is certainly no longer pie in the sky stuff.

Don’t get left behind.

For some reason, I just like the idea of VR over AR. Maybe it's because I am lazy and prefer to go full virtual instead of walking around.

The possibilities to monetise development in both realities are there.

I just really like the idea of AR in areas of the real world with high foot traffic.

Nobody can forget the craze that surrounded the launch of Pokémon Go. I saw so many people getting outside regularly for the first time since Brit childhood thanks to that game. It’s still pretty popular now even, for kids and adults both.

I’m convinced that smart glasses will catch on eventually too. Mostly because I really would like to have something useful like that. It may be further down the road, but I’m even more excited for smart contact lenses. I’ve never had to wear glasses in my life outside of sunglasses and I’ve always felt that they are a handicap. I’d rather wear a contact since it’s less likely to fall to the ground. Plus would be cool to have some crazy digital looking eyes with custom contacts.

In the long run, I definitely agree with you.

But while contacts would be less invasive, I do think a simple pair of sunglasses with a semi transparent screen to view the metaverse in augmented reality, would be much easier to produce.

I was thinking the other day when talking with someone about land and real estate and the situation in my town where you can't literally find any plot of land having utilities connected to it that you can build on that's probably time for the virtual land real estate market to boom. One guy bought some virtual land near Snoop Dogg's virtual mansion last year for about $250k. There must be something to that.

Snoop's plot is just in a purely virtual world, right?

I still think that AR overlays of the real world are much more likely to initially catch on.

To me the metaverse is already there with Leofinance/Hive/BAYC/Splinterlands. The combination of such ecosystems with AR/VR will be the ultimate Metaverse experience.

Yep, crypto offers the economics side of a truly free metaverse.

The AR/VR future will be next!