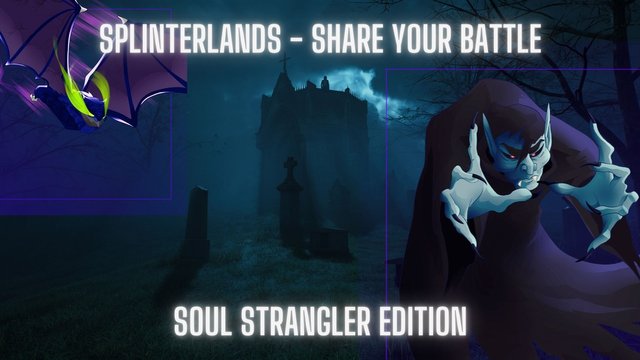 Another week, another “Share Your Battle” Competition. This time around we are paying the Death Splinter a visit and with it a very cool card: the Soul Strangler. Certainly a card with that is not very outstanding, but in some situations you just need that! In this article, we will talk about this card in more detail, as well as look at an example battle in the end. Furthermore, I will explain my thought process behind my team and what strategy I was trying to follow. With this out of the way, let’s jump straight into the action!

Frist of all, we need to take a look at the Card in Focus here: Soul Strangler. His picture shows exactly what his name is describing: He is actually trying to strangle something in this picture. I love this love to detail by the Splinterlands-Team, but I am starting to digress. For a card that is only costing us 3 mana, this card has some pretty amazing stats. Especially the 2 ranged attack straight away are a big plus. This allows us to deal some serious damage in certain rulesets as well as in normal battles as well.

With two speed and two health this card is certainly not the best out there, but what can you expect from 3 mana, right? Already on level three this card is getting an attack boost and can even go up to 4 ranged attack. This card does not have any abilities in the beginning but gets one on the final stage which is not that important for us but necessary to mention in general I think.

I really like to use this card in rulesets where not much mana is given to us as well as we need to play cards that are under 4 mana. Because this card allows us to deal a good amount of damage I really like to chose this card. The only problem is that it does not have too much health. On the other hand we are always able to bring the opponents health down as well because we are using the Death summoner here.

With the main attraction out of the way, we need to talk about the team surrounding it. Because we have the poison ruleset upon us, we need monsters that have a good amount of health and can potentially deal some additional damage. For this the Cursed Widneku is perfect as it comes with 9 health and 2 attack. Additionally, this card has the Thorns Ability which allows us to deal some amount of extra damage to the attacking monsters.

With higher levels this card becomes even more of a beast because of its healing ability. I really believe that this card could be one of the strongest tanks in the game right now and if you have the privilege to play it on a higher level, it must really be a joy playing this card. For our specific battle it will serve us as the front bumper and additional damage dealer to the opponent’s tank.

Next up we need some more cards that can deal some good amount of damage and still have an appropriate amount of health. This is why Dhampir Stalker comes into play here. With its 3 ranged damage we are more than able to deal some good damage and with five health it can certainly survive one or two round of poison. Because of its True strike Ability we can be sure that this card will find its target every time as well. I must admit that for 7 mana this card is not the cheapest tone to play but in this occasion I thought that taking the risk was appropriate and could help me in the course of the battle.

The card that saved us in this battle is without a doubt the Riftwing. You might wonder how this car dis our matchwinner here if it does not have any attack and has only 5 health. What are we supposed to do with this? It is actually kind of self explanatory. The strategy was to outlast our opponent in this battle. This is done best with cards that have a lot of health or can generate a lot of health.

The second part is exactly what the Riftwing is perfect at doing! Because of its Scavenge Ability it gains one health each time a monster dies on the field. Due to the poison ruleset we are definitely getting a lot of cards dying which means that we boost up the health of this card! This is why the plan in the battle was to outlast the opponent rather than bring him down on our own.

An additional perk of this car dis also the flying ability and the three speed that it brings to the table. It is incredibly hard to hit this card in the first place which makes it also a very usable card during Earthquake battles as well!

As we had a little bit of mana over, it is always smart to put in some bumps for the opponent. Especially if the opponent likes to run Sneak attackers, this card will guarantee you that he will burn one of his attack on this Carrion Shade. Sometimes this card is even good to take two hits but in this case we were expecting for this card to last only one round. If not killed by the Sneak attacks it will die due to poison anyways.

Moving to the example battle we quickly recognize that our opponent is playing a very Sneak Heavy Team. This is the reason why my ranged attackers are getting destroyed rather quickly. Nevertheless, both of them are able to deal some damage to the opponents tank which is actually a big reason why we are winning this battle in the end. Not only that but the Riftwing is gaining a lot of health by all the poison deaths at the end of round one which has also put us onto the winning road in this battle! 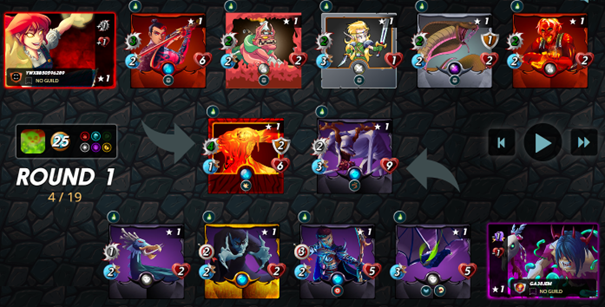 Published by ga38jem on
LeoFinance
On 5th August 2022