The MVP version of #Threads has only come out yesterday, and here I am making suggestions, although I'm sure many of them are already on the list of the Leofinance team for the next version, maybe even working on them already.

Don't get me wrong, the #LeoThreads MVP, as it is, can be used very well and offers a very interesting view of the comments tree.

What I was surprised by was the speed at which it operated, given that we are on the blockchain. And that even though the Lightning layer has been oversaturated by requests. If I understood well from one of Task's posts, I think it got overwhelmed at some point and crashed. And they needed to scale it up.

Which is great. You can't test that with a few people. That can only be seen in practice.

This morning (my time) Threads was already functional, so I suppose they worked super-fast on fixing the problem.

Before I move further, I want to clarify something. Threads IS NOT Project Blank, but the work done for Threads and what is being learned and fixed because it's used by a larger number of users in production will be included in Project Blank. Threads is a precursor to Project Blank. Its parent, if you will.

What Improvements Would Help Engagement on Threads?

I'm not adding any pressure, I know this will take time, and I don't expect them all implemented, just considered.

This doesn't necessarily help engagement, but just because twitter doesn't have it, I'd include it and I've seen others have it on their list.

Could be a problem if the backend assumes all indexed tags/threads are unchangeable.

That should be a simple one. As the number of topics increases, finding the one you want may become time-consuming, since they are ordered by how popular they are. 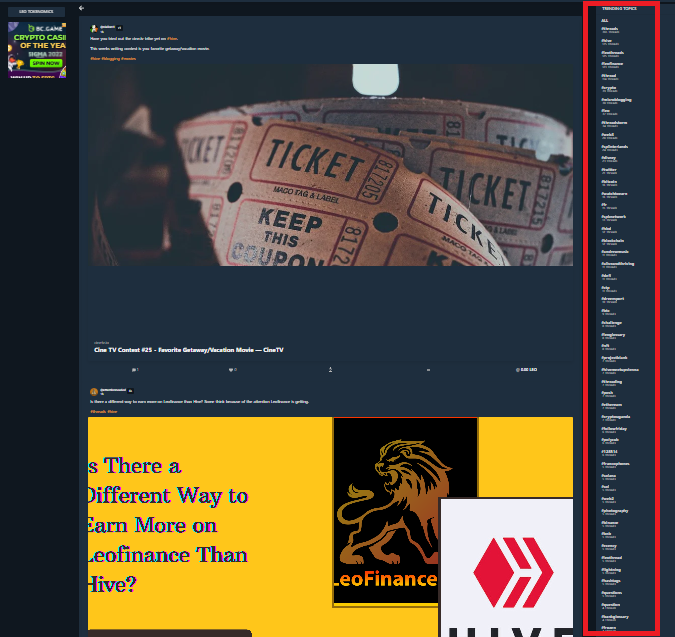 I zoomed out to the max, just to give a glimpse at the number of tags already used. They haven't all entered this screenshot.

In conjunction with search topics, this can be added, maybe using the same textbox. Even before profiles will be added (which Khal said they will), the list of threads posted can be narrowed down to the author.

Many other ideas revolve around the existence of the profile page which Khal said will be added. Here are two base ideas:

I don't think this would be easy to implement, especially if the Threads interface was thought to show only 1 comment and 1 reply at a time.

It is also something that could be implemented later on. Or not. Just an idea.

How I thought this should work is like this:

For the fluency of reading through the conversation and even making them longer, I believe this would be a major booster. But, as I said, I don't believe it'll be easy to make the changes to the interface.

That are some of the things the team can do. But you know what's easier than that? What we can do! And that is to use Threads in the MVP version it is now. The more we use it the more information they have, the more things we break and they can fix, before they can really start adding new features.

I would like to see a better UI for the feed. Maybe have a few trending posts at the top and then your following underneath.

It's hard to see the engagement or to get engagement where as something like reddit style pages would bring the popular content in front of everyone.

Khal said they will introduce a profile. Maybe in the next version, I suppose.

Threads can't use the same following system as we use on Hive. The reasons for following are completely different.

I agree, right now it's very hard to follow a conversation or filter content, other than by tags. This will change when they add a profile. At least I hope so.

Glad to hear that it was fixed quickly. Kudos to the team. Thanks for sharing.

Yeah, I'm pretty sure there will be other scaling issues and bugs revealed.

That's a nice one. You were a bit harsh about DEC.

A ton of good suggestions here.

I hope Khal and the team are writing these all down! ;)

Thanks! I expect they must've heard many suggestions, multiple times. It's just a matter of time to implement them and prioritizing.

Can't wait for the app!

That will definitely boost activity since most Twitter-like activities come from mobiles.

I think it might be better to have everything under custom JSONs. I have noticed a few people talk about how it's confusing to have all the notifications mixed up.

I believe that's why this version was launched with comments. To see how it works and to watch some reactions. Plus, to implement custom JSONs more work needs to be done, which will postpone Project Blank. And the content will be "invisible" from other interfaces, unless they want to read and interpret the custom JSONs. Personally, I like the custom JSONs idea because it becomes a separate thing. I'm pretty sure with comments there will be some complains about messing up with the reward pool and stuff like that.

at least I get something new to meme on with Threads

Yep, a great place for memes.

Thanks, keep us updated on Threads! Seems to be buzzing right now.