Splinterlands: Energy Capture Rate Directly Exchangeable for Something of Value?

For newbies to Splinterlands, Energy Capture Rate (or ECR) works like voting mana on Hive. The smaller it is, the fewer DEC you earn when you win a ranked battle. If you leave it at 100%, you are wasting DEC, just like with voting mana and curation rewards. 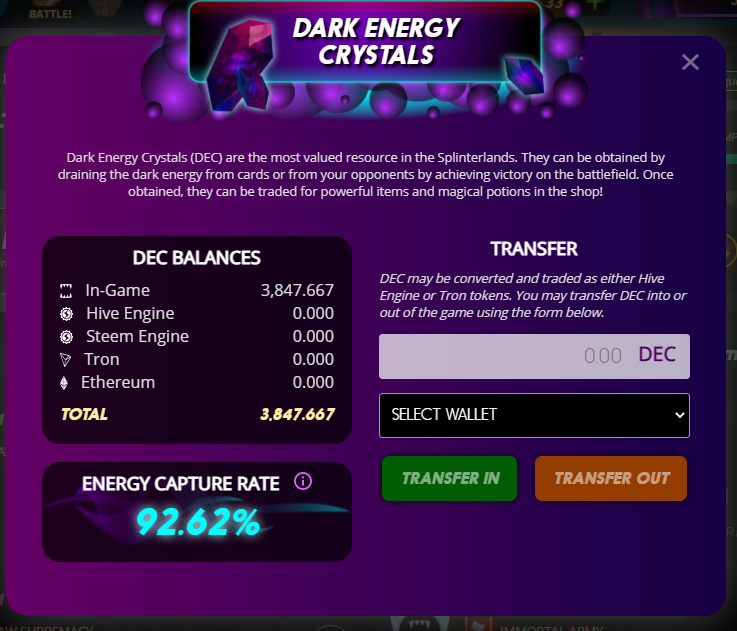 Regarding the title, if you are an experienced Splinterlands player, no, ECR is not currently directly exchangeable for something of value, as far as I know.

What do I mean by directly exchangeable for something of value? Obviously not playing more ranked games, through which you can win rewards.

But let's consider this situation.

If you have an excess of ECR (to not reach 100% till next day when you'll be able to play), or if you know you won't be playing for a few days, would that be a good enough reason to want to lower the ECR on purpose without actually playing more?

Maybe even lottery tickets can be bought this way, and a lottery be held at the end of each season. It doesn't have to have big prizes, the idea is not to discourage players to... play. But often less gives a higher pleasure than more. People will have one more way to optimize their accounts while not attempting to race against bots, on who plays more games. We know who wins this race anyway!

If you are a player, I don't know if you like this idea or maybe have a better one.

That's what I thought of, because I often (not always) finish my daily quest before I reach the ECR threshold I have each day (around 84%). And then I keep playing just not to reach 100% by the next day. Most often, I'd prefer to end it after the daily quest is completed, but then it's not optimized.

The Splinterlands team, even if they like this suggestion, I wonder when will they implement it with so many things going on...