Will We Have Decentralized Jobs? 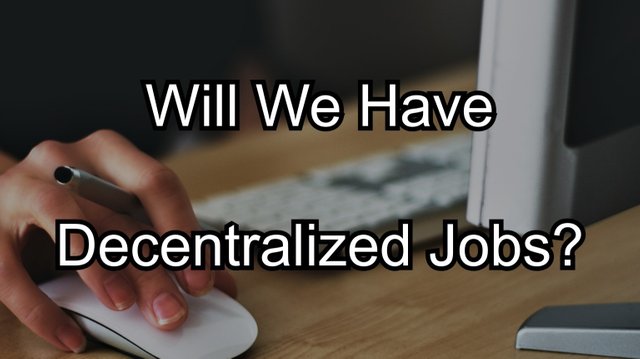 It was at 13 or 14 years old when I started to think about how the games I play were made. What I discovered was games were developed with a programming language called C++. After that, I learned more about it and realized what I wanted to do for a living.

I studied hard and spent many hours in my free time improving my skills, and after some years, I got my first job. Recently, I was wondering about the 9-5 job and how cryptocurrencies could change the way we work.

It was when I solved a bug in an open-source project when I had the idea, what if I could get rewarded every time I solve an issue? Think like an evolution of Justeat, Ubereats, or any other food delivery service.

In the IT field, it’s very normal to work like this: you are assigned a task to be completed within a limited time, depending on the difficulty. So, imagine getting paid between 0.01-0.1 ETH every time you complete a task. I would work more motivated if that happens, don’t you?

The tech world is expanding now even more than before. Blockchain is and will be a revolution in every aspect of our life. At some point, if the digital world moves to a more decentralized state, there should be a deficit in the number of developers, designers, etc...

The new apps and services in the crypto space appearing from nowhere means the demand for high-skilled will increase. These new projects will suffer from a labor shortage, so finding and hiring new workers will be difficult.

A solution could be to decentralize the job or task. For example, the manager of the team could create different tasks. These tasks could consist of adding a new feature or fix a bug. Then, the manager adds a reward and publishes it on Github. Later, the developer sees the task and assigns it to itself.

Once is finished, a member of the team reviews the task and if it’s good enough then it will set the task as finished, then an automated system sends the reward to that anonymous developer.

In the end, is very similar to freelancing but with the benefits of crypto and blockchain. The crypto freelance would choose the workload, the project, or the place; so it should expect more freedom in its life and choices.

At this point, there is no need for a contract or anything related. The developer just gets the task and does the job, receiving crypto in exchange. Then, the developer will decide if wants to keep working on more task of the same project or move on.

However, I don’t think this could apply to all types of jobs. Delivery food jobs already work great with this model, but at the moment, many businesses need to implement full automation for non-qualify jobs.

If you take a look at many crypto projects, you may find them looking for people to work with them. For sure that could be called a decentrazlied job. Even me I worked once as a translator in a project and I earned crypto that's not controled by any goverments. They can pay in bitcoin or what ever. No one will be able to track you that way or even find how much you earned, epsecially if you create a wallet on the prject itself, but not store that in exchanges. Exchanges could send the information about you to the goverment and you will have to pay taxes from that and that will not be decentralized even if that's crypto.

Already, the only one I saw it doing this the right way is Harvest Finance. They call it "contribution work", you get $FARM in exchange for contributing to their tasks.

I think Gitcoin also has something related to what I mean or at least they want to go that way, but I'm not sure because I didn't look deeper into it.

But yeah, I would like one day to work like harvest finance, you contribute as much you want and get crypto in return. No contracts, no taxes, and no government.

Thanks for reading and commenting :)

Job decentralization will obviously help to solve some job issues...

Read and liked it, altough this sounds more of a vision for the future and a bit like sci-fi of worklife ;)