It took him long enough, but Peter Schiff has finally capitulated on Bitcoin

In a tweet earlier today Peter Schiff admitted that bitcoin has a good chance of going to $100k.

For some backstory, Schiff has been the biggest bitcoin basher and bear out there, even bigger than Jamie Dimon and Warren Buffett.

He's twisted every development to try and take shots at bitcoin and promote gold, which is his baby.

Every single time he's looked silly, but that hasn't stopped him from sticking to his guns bashing bitcoin.

He posted this year earlier today: 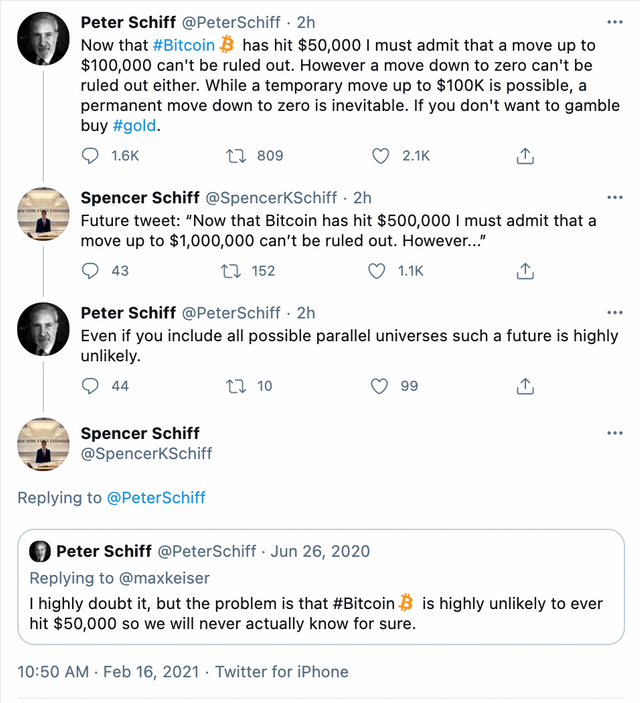 This is sort of a big deal!

However, it may be a big deal in the way that we don't want it to be.

Usually when something finally runs out of haters/bashers and bears, it's usually near the top of whatever trend its been on.

While I don't think that is true now because I think we have to go to $100k still, it is noteworthy to watch the bears fall.

I think we will really know the top is in when not only does Schiff admit it could go higher, but he turns around and buys it.

That won't be happening anytime soon, but perhaps he trades in his gold for bitcoin when bitcoin is $200k or so.

C'mon Peter, you can do it.

Old dogs don't learn new tricks until their owner stops feeding them, well gold is looking weaker by the day so old Peter is about to stop being fed by his master.