Savings: An Important Aspect In Seeking For A Viable Job Opportunity 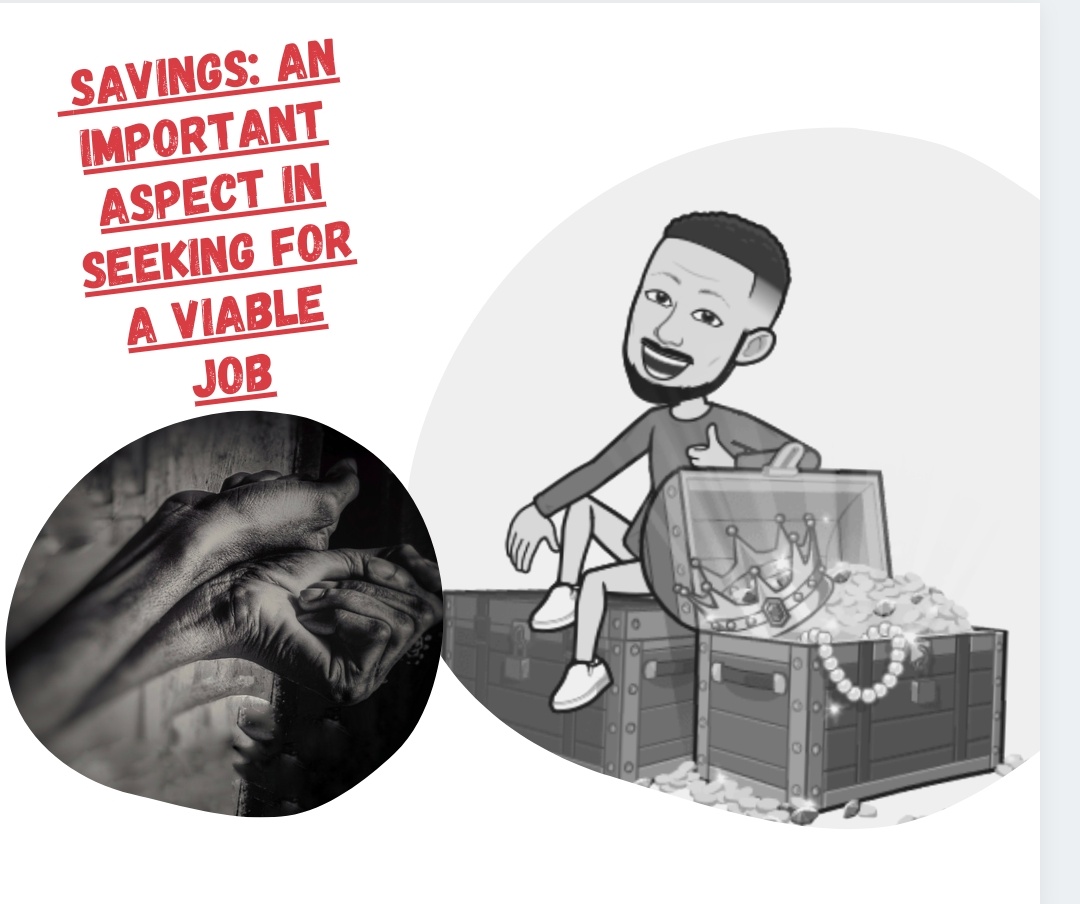 The Issue With Unemployment

The situation of unemployment brings to light so many aspects of clarification that one must never ignore, especially with their personal finance. In the society where I live, so many people do not analyze an employment opportunity before eventually taking them, and why is this? The need to feed, the need to take care of rent, the need to clothe and the so many other primary needs that's necessary for thriving.

Evaluation of a problem is very important especially in the aspect of looking for a job, choosing to be self-employed or working for someone. For example, a man with a nuclear family of six would find it rather difficult to be an entrepreneur, this is because entrepreneurship would require time and money plus other resources to grow a business, however a single person would find it easier to be a start-up.

This is because they're concerned for only their needs, and they can make plans for them without having to hamper the growth of their business. Being an entrepreneur requires a dogged commitment to the growth of a business so much that it might affect the other aspects of a person trying to grow that business. In my society, people take on jobs owned by Chinese investors due to the fact that the salaries feels and seem lucrative and secondly because it's standing as the only viable option.

However, 50% of people I know hardly finish up to 30 to 31 days that requires them to be paid, halfway, they're mostly caught up with serious health issues, the stress of working in inhumane conditions and having to adjust to the harsh working conditions of the Chinese supervisors, so why then do people still choose to work when they know there's a possibility of stopping halfway?

It's simple; the need to take care of numerous wants. This need often makes it difficult for people to be reasonable. They think of the moment, they want instant gratification hence they forget the prospective impact of their choices and the repercussions that follows. The promise of sweet rewards is a bait which the Chinese uses to control the unemployed in many Nigerian states. They use these baits to attract people, but refuses to mention the unbearable condition which they'll be exposing these workers to.

At the end of the day, unemployment makes people see the reward, and it blinds them to the effort they're going to be putting in. It's logical, one's health condition should also determine the kind of job they'll be doing. This is because the more a person can stay healthy, the possibility of them working. I've worked in a place where, your salary is deducted on sick leave and even when you fall ill on the job, your salary takes the hit for your medication. At the end of the day one's quality of existence is reduced while accruing serious health issues as they age.

The Essence Of Savings

This is where the essence of saving eventually comes in. A lot of people would argue that their income isn't enough to allow them to save, but saving is not generally about what one earns. It's dependent on financial discipline rather than buoyancy. One can earn a lot but find it difficult to save, but this might generally be different from people who earn just enough but set aside some particular percentage for future usage and emergencies.

Truth is, saving is broader than we actually think. The act of saving is what eventually accrues us savings and savings can help to plan the future, prepare one for emergencies, unplanned miscellaneous expenses and even gives one a feeling. Having savings makes people feel less reason to panic, they can take on more risks, which might or might not lead to further reward.

The Need To Feed

One thing is, one can be unemployed, but financially stable to some extent, it depends on their previous economic endeavors with their former means of income. It's important to have savings. This makes one very selective with whatever job opportunity they're considering. There's no sense of haste or a need to take up a job for the short term or period.

Haste is why a lot of people are in the wrong job, they're not totally considerate of other factors which could make that job difficult for them. My point is, people shouldn't look for jobs because their most important need is to feed because this makes it easier for them to be taken advantage of and exploited as well. In essence, it's important to save, one important aspect is that it gives you leverage against prospective exploitative employers.

Why Do Nigerians Choose To Dye Their Hair? (Feature Article)

How Life's Issues Prevents Us From Obligatory Priorities

A Sense Of Self Accountability: Why Minimalism Exceeds Beyond Spending Money.

Causality & Common Sense: Some Answers To Most Plausible Questions?