Spending & Accumulating: The Low & High Point Of The Crypto Seasons. 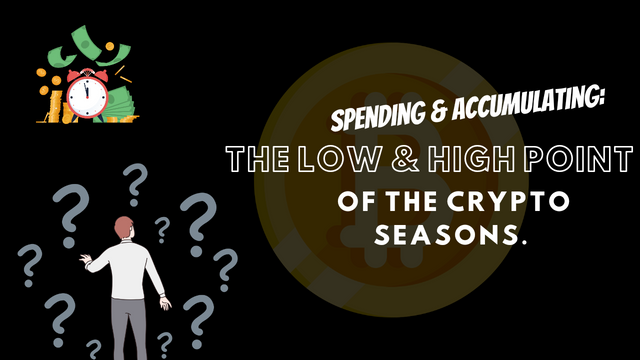 The bear market automatically tailors people to be minimal with their spending, ironically this has been the opposite for me. It's currently the most testing phase of my life at the moment because I'm facing a bear market and spending heavily at the same time.

This isn't because I choose to, it's just that some of my important life goals have aligned with the inception of the bear market. In reality, this sense of accountability kicks in with every cent one spends during the bear market.

Normally, people create a limit through which they spend, this means that our aim in a bear market is to mostly accumulate more and spend less as well. The reason is that everything we're giving off, we're giving off for too free.

For example, a 100$ can buy more Hive at the moment than when it was $1 Potentially this $100 is only $100 and wields the purchasing power of $100 alone, but potentially, this can be tripled by spending it on Hive.

However, if a $100 necessity come through, it'll be difficult for a person to envisage the futuristic prospects of Hive, because of the present need they need to take care of.

However, if Hive eventually does some really good figures, one would have lost what they could have potentially gained. Any money we choose to excessively spend during the bear market taps into our accumulation plans which isn't exactly futuristically healthy. Being able to take advantage of a prospective bull market is to be seasoned with our preparations during the bear market.

This is to say that the degree of change to one's financial status is dependent on the sophistication of the accumulation method.
This is why it's important to develop a personal accumulation style.

However life's expenditures are inevitable, it becomes more annoying especially when you're powerless to redirect them to a certain period where you'll be financially buoyant. For example, paying rent or utility bills are slated for a certain period, which means that whether it's the bear or not, you'll have to spend money to get it done.

The Downside To Spending Aimlessly

For all the times I've attempted I've fallen short of one or two of these rules, making me spend hugely on agency fees, transportation, and even spending on drugs due to being largely sick for the past three weeks. At the end of the day, I've ended up not gathering, every penny I've planned to use to buy the dip has been spent with achieving any aim.

This hurts because I'm a very disciplined person when it comes to being in the position to unwillingly spend without actualizing any aim is something that I hate to do. For every dollar I spend, I use to consider its crypto opportunity cost.

I do this by asking myself this question "If I had bought Crypto with this money, would it have served me better value?" However, since volatility is an issue we cannot calculate the prospective value of crypto.

This is because some of the expenditures we engage with daily are life savers, however, we can weigh or measure value with something definite and relative, this isn't sadly the same with crypto.

However, there's a sentimental belief we all hold that the growth of crypto is inevitable irrespective of the crazy decline that always comes in between the seasons. The truth is, the bear market is for gathering and accumulating and if we cannot do this, there's going to be the fear that this might haunt us.

I'm at that period when all my spending have not achieved anything for the past five weeks. While this is scary, the aim is to hope that I can put an end to this soonest while concentrating on accumulating again.

Bear markets definitely put more pressure on me but not for the reasons most think. It's really the only time I can afford to buy and it forces me to make decisions. I always dream about buying Hive on sale but it is usually just a fantasy and I don't have to act on it. But now I do and I have not bought yet.

Having been through bear markets before I can promise fellow hivians that their grind will actually give them a bigger share of the rewards pool because there are less people competing for it but buying is really the opportunity. I just don't know if I have the guts to do it!!!

I will say that I am loving HBD right now. I may be missing out on hive but I feel safe with a 20% APY while most people in crypto would beg for that right now.

I will say that I am loving HBD right now. I may be missing out on hive but I feel safe with a 20% APY while most people in crypto would beg for that right now.

I feel good too with the APY of HBD, so much prospect. As per missing out on Hive, that might be colossal because Hive might do great things in the future. It's not bad to actually get some at least..

It even gets crazier than I thought, I might as well ignore the discrimination I face as a foreigner over here because even at your own country you are being discriminated against.

At times we are forced to spend more that we intend to, some situation gets to be out of our control and it can be disappointing.

You were once telling me about the discrimination in SA, I think Nigeria has gotten even way worse and the situation is almost like in SA, This isn't the friendly situation you left bro. It's terrible here at the moment. I've never felt so low in all my life. It's been absolutely condescending.

It is an absolute crap, to be discriminated for being a different tribe? What has marriage got to do with wanting to rent a house to stay these are pathetically foolishness at the peak.

Let's just forget about Nigeria trying to be better, that country is doomed, I don't see it being any good in our life time.

Spending remains inevitable when living and accumulating sounds optional especially if there's no plan. Little is actually better than none. When I see post like this tears fall from my eyes as it scratches my my cheek but right now, I only yawned.

Seriously, accumulation is a big deal because you'd get to see that tommorow becomes more important than today. I'm only at a place right now that I can't accumulate but reduce my spending still till it all gets better.

Important reminders like this only warrants the alarm in my head to look out for ques and always be ready to accumulate and increase my value.

Thanks for the constant reminders.

To me, accumulating is more of a necessity rather than it being optional. This is because you actually need to make money in order to sspen it's a proverbial case of the egg and the chicken, which comes first. While spending is inevitable we firstly save before we can actually spend.

Yeah, you are absolutely right.
I was only talking from my current situation.