Daily LEO #10: Tesla, Apple and Major Players Adopting Bitcoin | Is it Too Late for Retail Investors?

In this episode of the Daily LEO, we talk about Tesla's recent acquisition of $1.5B worth of BTC and their important announcement around accepting Bitcoin as a form of payment. Many people are wondering if it's too late to get into Bitcoin and if they already missed the boat. 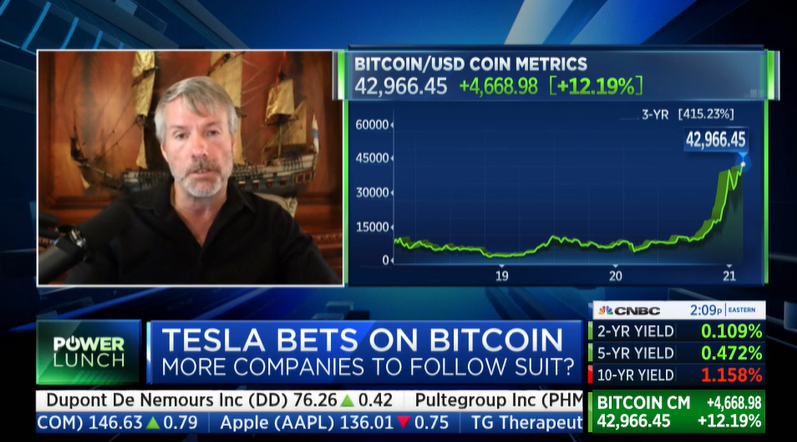 Tesla getting into Bitcoin has led to this idea becoming a reality. Many have discussed the possibility that major institutions and corporations from the S&P500 would follow Microstrategy's lead and purchase BTC for their corporate balance sheet as a replacement for holding dollars and a superior store of value to gold.

The dollar is likely to lose 50-75% of its value over the next decade and major corporations hold billions upon billions of dollars in cash on their balance sheet. They need to stay liquid, which makes it difficult to hedge that cash with something that won't lose value over time but still remain liquid enough to access the capital at any time.

Michael Saylor and Elon Musk had an exchange on Twitter back in December and Tesla purchased BTC less than 3-4 weeks after that exchange. Many in the space expect other major SP500 companies to now follow Tesla's lead. Microstrategy was a big wake up call to corporations, but Tesla getting in has made it a necessary talking point.. not just a interesting thing happening in the world.

Here is a link to the SEC filing from Tesla announcing their purchase of $1.5B BTC and also that they will soon start accepting BTC as a form of payment.

Will Apple Launch a Crypto Exchange and Stockpile Bitcoin? 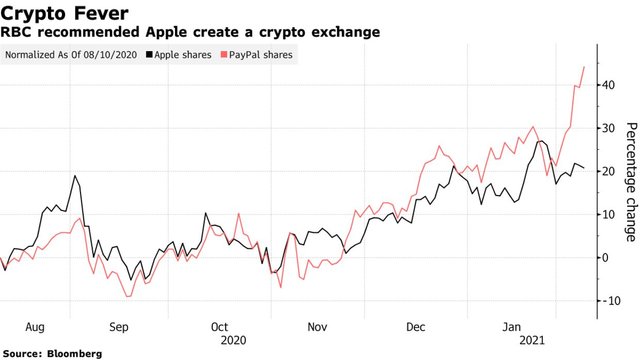 This article comes from Bloomberg where an Apple bull shares an idea that Apple should launch their own native crypto exchange via the Apple wallet app.

Apple has the cult following and ecosystem of hardware and software to do massive things in any industry they decide to venture into. They're even getting into the car space to try and take on Tesla.

Apple also has far more cash on their balance sheet than nearly every other corporation in the world. They are extremely cash rich and thus, a hedge by purchasing BTC would likely result in a far greater purchase than Tesla made.

Launching an exchange on IOS for crypto is a given. It's ridiculous to think about the potential cash flow that could generate. Look no further than the profitability of Coinbase. Imagine if Apple created their own native rival to Coinbase. The IP and brand recognition alone would rival Coinbase right from the start.

Is it Too Late to Buy Bitcoin? 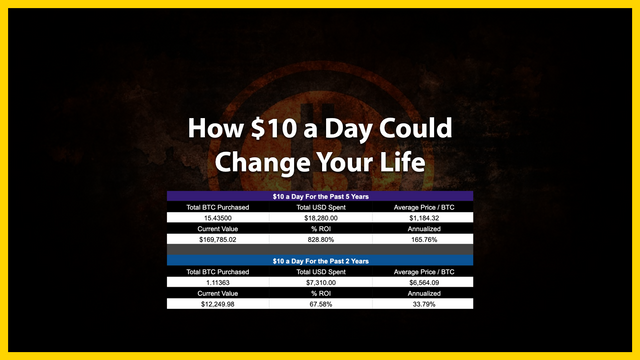 A few years ago, I came up with this idea for getting friends and family into the crypto space without exposing them to the rollercoaster of capital and emotions that come along with being a HODLer.

What I came up with was the "$10 a day" strategy. I set many of them up with something like Coinbase or the Cash App and we created an automatic recurring buy through the app. From there, it would automatically withdraw $10 (or more if they wanted) and purchase BTC every single day or every week.

6 months ago, I shared some research and solidified my ideas around this method of getting into the crypto space through dollar cost averaging.

I've set more than 20 people up with this type of strategy and the vast majority of them are up 3-10x with their average purchase prices being below $15k (depending on when they started).

In the past few months, I've gotten more calls, texts and emails asking about Bitcoin and how people can get into the space. We all know the stories of people who bought in at $20k in 2017 and experienced the worst of what crypto winter had to offer.

So instead of telling everyone that it's too late to get into Bitcoin, I offer this strategy. It's a low-risk and low-stress way to get exposure to cryptocurrencies over a long period of time. Once it's set up, there's nearly no maintenance that has to be done. Check the price every so often if you want to.

It's not too late to get into Bitcoin and it's definitely not too late to start learning about the space. With a low barrier to entry, I believe that this is one of the easiest ways to get involved without risking the farm.