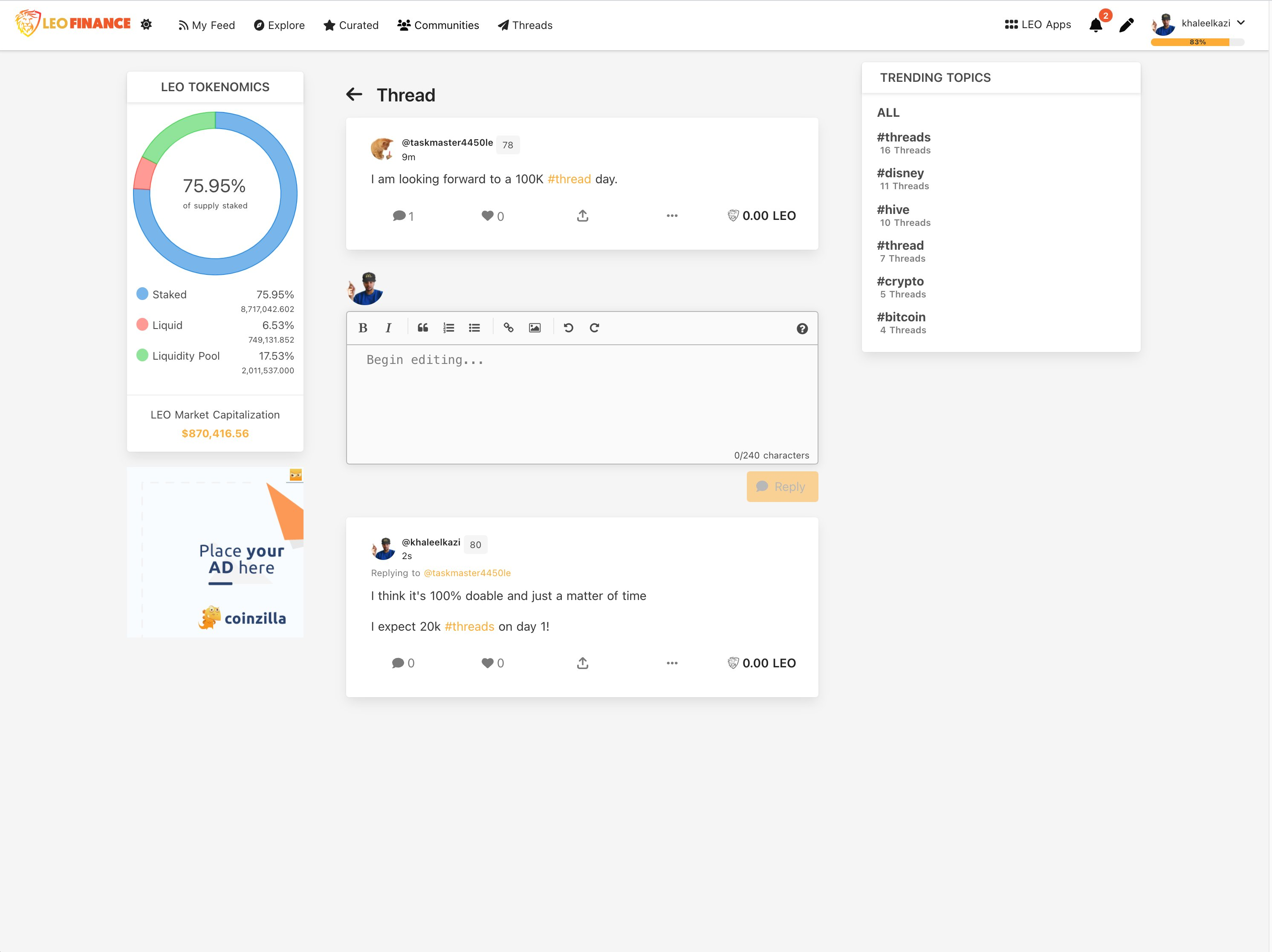 It feels like a meme at this point to say something is coming soon, especially in the LeoVerse. Seriously, this time we have an answer to all of our "Wen?". That answer is tomorrow. Thursday, August 4th of 2022 we will see the launch of LeoThreads, which is a microblogging feature built on Hive. Sure, you can say "but we've had dbuzz all this time" but realistically... It's never been very widely used. It's just too hard to get started for new users.

With LeoThreads, new users can literally sign in with their existing Twitter account and start microblogging all they way. Of course, they will shortly learn that they need to start staking HIVE to get resource credits necessary for all the small Threads. This is literally the easiest way to onboard new users to Hive, and it's a game changer. LeoFinance has been pushing the envelope of what we thought was possible from a small project (trust me, I'm on the team) and continues to step outside the "box".

It's time for everything to change. It's time for all those users that were scared or not comfortable with creating long-form content to jump into the party. The reality is that not everyone wants to create 600+ word content every day. Those same people are probably the ones sending out 10+ tweets a day on Twitter. LeoThreads adds a whole new dynamic to the greater Hive ecosystem that we've never experienced. 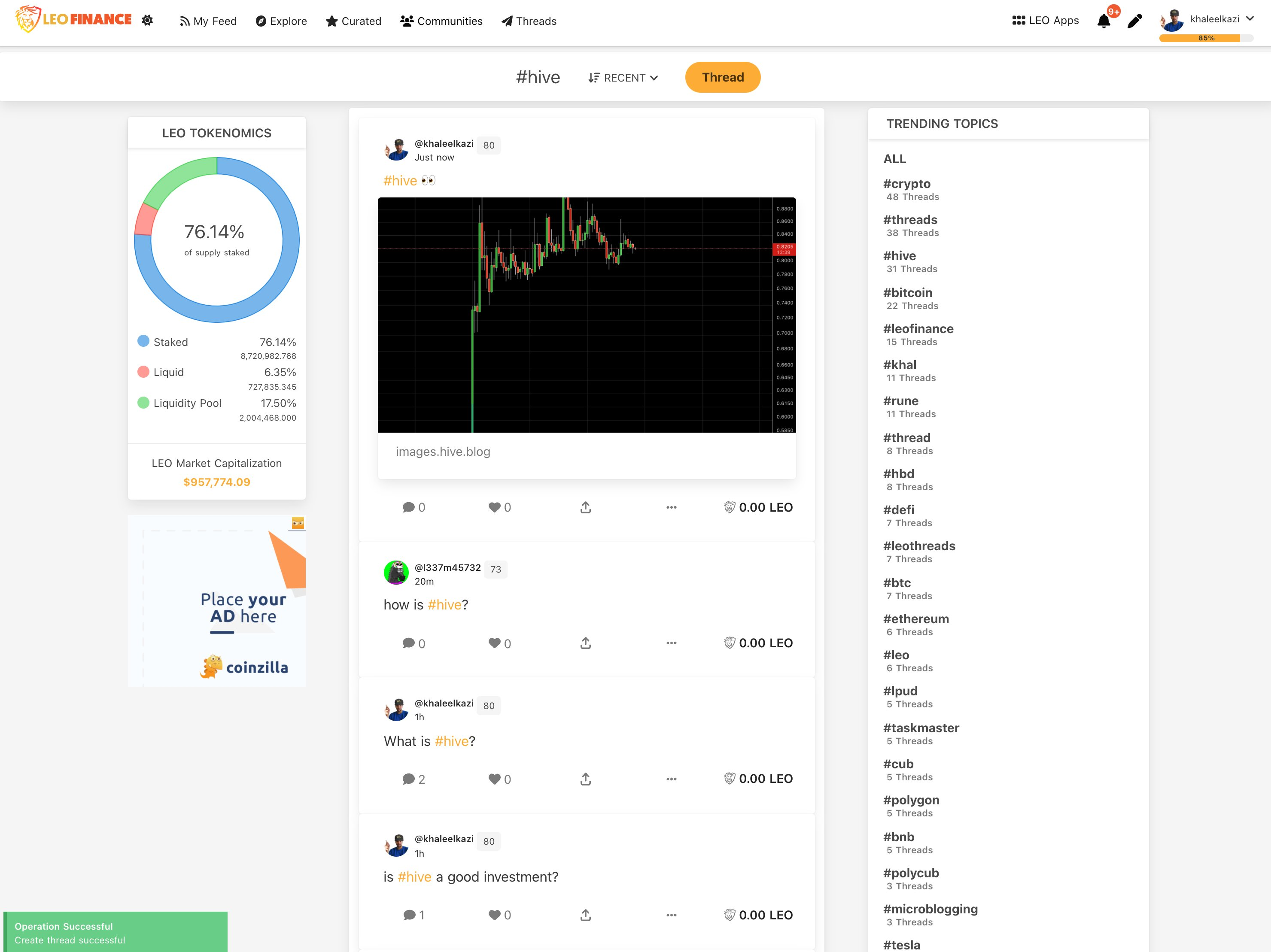 After countless hours of development, and days of stress-testing along with bug fixes... We have arrived at the release of one of the most long-awaited releases on Hive. Everyone is always saying "Wen project blank?", and trust me... I'm one of them. We can't just jump straight into it though, we need to make sure everything works before that kind of huge release. LeoThreads is the precursor to Project Blank, in a nut shell.

On Twitter, anyone can send out a tweet about whatever that's a maximum of 240 characters. They have to be careful though, because censorship is rampant and big brother dictates what can be on the platform. LeoThreads fixes this. Tkae back the control of your content. Take back ownership of your words. Send out those 240 character microblogs via LeoThreads in just seconds by logging in with your Twitter account.

The other insane part about this is that you can earn crypto just by doing your same activity! If someone with a decent stake of HIVE or LEO power votes on your Thread, guess what? You just earned a little bit of money. You're not earning anything from those 40,000 tweets you've sent over the past 5 years. You may have started to built a little bit of a following, but are you getting any value from that? No.

LeoThreads brings the value to short form content in a way that has never been done before. Be part of the revolution.

The Lions are ready to pounce. The launch is just hours away, and we couldn't be more excited to bring this to the table. Threads is going to have an explosive launch, and we need to make sure our roars are heard far and wide. Let's use Twitter and other social media to spread Threads to that farthest corners of the internet. Conveniently enough, there's a Share button right on the UI so you can share your Threads on a variety of other social media platforms.

The time for the Lions to step up is now. We're all in this together, and we will all benefit greatly from the launch of LeoThreads. The ad revenue is up over 5% daily just from internal testing so I can only imagine what the revenue is going to look like when we have hundreds of people Threading all day! Don't forget - that ad revenue is stacking up to start monthly LEO buybacks... So I'd start stacking up LEO now. Not financial advice, of course.

Are you ready to be a part of the microblogging revolution? Ready those roars, be cause we need to make some FUCKING NOISE!

I haven't been getting Leo payouts in like weeks, I think something is broken with that network

Nope, everything is working fine! I'm not sure what LEO payouts you are referencing, but open a tech support ticket on Discord and I can help

I don't use discord.

Just don't forget that w still need Twitter to onboard the masses from Web2 to Hive.

Hopefully not too ugly!

Oh yeah, we definitely need it for now. It's just so easy to on board from there.

We all hope Leothreads will display nicely when cross posted to Twitter, if all is well then we shall bring a ton of people from Twitter to Leofinance easily.

will the thread feature be found in the LEO Apps section?

It will be right next to Community Pages :)

Congratulations @l337m45732! You have completed the following achievement on the Hive blockchain and have been rewarded with new badge(s):

With tons of Threads flooding twitter, will they perceive this as valuable or as a threat(d) 😉 or will it not have such a big impact?

I am all ready for the long awaited launch of Leothreads, hoping for a smooth user experience in the first few hours hehe .

there will be bugs!

It is okay we shall persevere hehe

How to participate in the first leothreads?
I want to post but I didn't understand where and how.

It sounds as something great is coming... Sometimes I feel like changes are coming faster than my learning skills for new things.
Congratulations to the community!

Yay! 🤗
Your content has been boosted with Ecency Points, by @l337m45732.
Use Ecency daily to boost your growth on platform!