Do you remember SteemLeo launching?

Hello LBI'ers. Today I struggle to think about what to write about. I normally have no problems but today im out of ideas. I look through the LeoFinance trending posts for inspiration and see that half the posts in the top 30ish are related to LEO, the rest is a mix of crypto news and sharing information about other crypto projects. What can I write about LeoFinance that has not been written a thousand times already? There are tens of thousands of words in posts out there about Project Blank and we know nothing about it, mostly all repeating the same information over and over. I guess today I will write about Leo and what I remember about it from its beginnings. 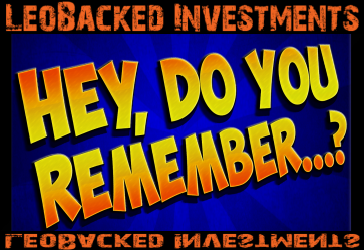 People are so focused on Leofinance's future they forget about its past and how it got here. A great way to see the future is to look into the past they say. I remember the day SteemLeo was launched and it airdropped it's token to PAL token holders. I was more excited about SteemLEO back then because it launched around 2 weeks before I launched my 1st token and the timing for me was perfect. I was launching SPI tokens and a financial/investment tribe had just been launched, this was the perfect tribe/community to target SPI tokens at. Around 2 months after SteemLeo launched, i DM'd Khal for the first time to ask him something and after a short chat, he bought 1000 SPI tokens from me. This was awesome because I remember thinking, ok im shilling an investment token on his frontend and he just bought 1k tokens from me, this is verification he is cool with me playing in his backyard. This is why we thought we would be ok to launch LBI on LeoFinance but none of the Leo team have bought any LBI's tokens so im a little paranoid that they do not approve of the project. With that said, maybe they are unaware it exists.

For those that were around SteemLeo back then, the frontend was much the same as every other tribe, very basic and very clony. With that said, the content was much better as it was all money-related. I remember leo.voter getting started up to dish out big upvotes for people using the steemleo tag and SPinvest soon become on of there biggest delegators by leasing them around 10k SP, a number that does not even register in the top 20 delegators today. User numbers were low and steemLeo dare i say it, was mostly known as a tag to use to earn some free tribe tokens.

Fast forward a few months and the team had started to play around with the frontend, just small things but small things make all the difference and helped make SteemLeo standout. I mean small changes like adding price feeds for LEO, HIVE, BTC & ETH to the homepage. This is nothing really but when users can see these small things happening all the time, more users started to use the Leo frontend because it was just better. Before HIVE was forked, SteemLeo had already gone far and beyond any other tribe in terms of growth. Not so much in users numbers but they had laid the foundations down and were prepared for bigger user numbers. As well as continually upgrading the frontend, they launched LeoDex, LeoPedia and i think attempted a Leostore as well.

HIVE was airdropped, nobody knew what was going on with tribes and the community wanted for Aggroed to release a post explaining what was going to happen. SteemLeo moved from STEEM to HIVE and rebranded as LeoFinance. Since HIVE, LeoFinance has been on fire. New UI, wrapped LEO LP, new reward structure and so many other use cases being added for LEO finally pricing its token price more than HIVE itself.

The difference between Leofinanace and other tribes is Khal and his team. They are continually innovating and adding use cases to the token. They have been smart and planned for the long term and also very transparent with the community. (part from project blank, haha) We know they have great plans for the future and if they play out at half our expectations, the sky is the limit. Think about how many users there are on LeoFinance today and think about if there were 50k daily users. It's 100% possible and even higher as crypto becomes more mainstream, LeoFinance someday could have over 1 million users, that's still a small number in the grand picture of things. I think LeoFinanc still has a lot more potential.

That is a very short snippet of how I remember LeoFinance from it started. Sorry for not many details but im pushed for time and I literally have 13 minutes to produce a thumbnail and upload this post. If we look into Leofinanace from its beginning, its easy to see why it is what it is today and it's easy to see where it is headed :)

Thanks for reading today's post. Where you around when SteemLeo launched? Did you do the dirty and sell your airdrop and now regret it? haha