Feeling Bullish About This Little One 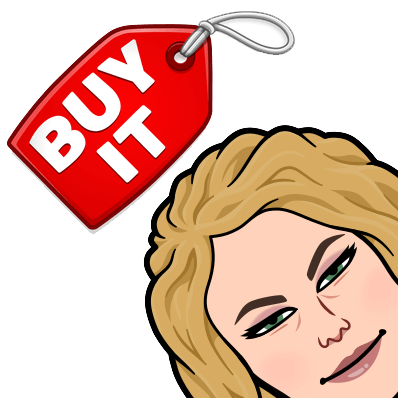 Anyone who gets into cryptocurrency does so with the idea of ​​getting rich quick, but how real is that hope really? That is something you do not ask yourself when you are just starting out, because often it is that you do not even really know what cryptocurrency actually is. Logical! But you hear stories about Bitcoin that first has $ 20,000 value, then you hear that Bitcoin has dropped sharply to 7,000 euros again, and your interest fades because hey, that crypto thing is just a bubble. Then all of a sudden years later you hear on the news that Bitcoin has gone through $ 40,000 and with a bang you realize yourself. “Fook! I should have bought it when it reached $ 7,000! ”. Because you now know for sure that Bitcoin will continue to increase in value, and you think that you have missed this boat, but in the meantime you have heard through many stories that there is much more crypto if only Bitcoin you decide to step into it. And then? Do you start with the 'old trusted' coins such as Bitcoin, Ethereum, Litecoin and maybe Cardano? After all, there are many positive stories about all these coins on the internet and they have already made many people rich.

But if you don't have much money to invest

Depending on the budget you have, these coins are of course also a fairly safe choice, but you can also look for it in a different angle. Especially if you do not have much to spend, you can also look at other coins.

Tokens with a very low value. Maybe even bet on ICOs and hope that you can grab a nice spike right after the listing of a token. You have recently been able to see that with LIT.

I had also looked at that myself, but immediately after the Binance listing it was too high for me to buy.

But suddenly there was a surprise. Coincidentally, my partner once decided to have a look at cryptocurrencies. He first wanted to get in, but the KYC verification changed his mind. Yet it turned out that the interest has not completely disappeared, but his approach is very different. He just thinks, “Okay, we just missed the Bitcoin train, because if you can't put in more like 20 euros, for example, you will have to wait a long time for that to become 2000 euros. Simply because Bitcoin will not roll over 1000 times as quickly. Which is not to say that you cannot make a profit on Bitcoin. But it is a different kind of investment.

Appreciate the little ones

And he had seen that there are also small tokens that have the possibility to rise 100x or even 1000x, for example. But at the moment you can still buy a lot with 20 euros. And he had once sat down to some of those little tokens. The moment he had made his choice, he suddenly said to me, "I'm going to transfer 20 euros to you in a minute, then you have to buy TELCOIN on Kucoin for that". Dumbfounded, I looked at him and asked what it was. He told me to check it out myself, but he wanted to do an experiment. According to him, Telcoin had options, and he just wanted to try whether that would be the case, and whether his insight is good. I have been ordered to buy, and to hold it for 10 years, so to speak. Because, as usual, I had absolutely no idea what this Telcoin would be, and what it did, I was the first to see how much I could buy for that 20 euros. To my surprise, I saw this coin fit my plan very well, because for only the 20 euros that I was allowed to spend for this experiment. To be precise, at the time of purchase I bought 13008 Telcoins for 20 euros. That means a price of €0.0015375 per token. As you can see, a very low price. But according to my partner, that's what made it so interesting to give it a try. Because he said, “We will not miss 20 euros, if it becomes nothing, then it becomes nothing… if it becomes something, that is a lot of fun and a bonus”.

Of course I could only agree with him and so I bought the 13008 Telcoins in the evening. Of course I watched what was happening every day for the next days and the first time I looked I saw a dip. The 20 euro had changed to only 19.38… although I immediately realized that on so many coins that actually was only a very small dip. But then it suddenly became fun. Because the time after that I looked it had changed to 21 euros, a slight increase. And yesterday it was suddenly 39 euros! The moment I saw that I started to act. Not said to my partner until I was done with it by the way. Lol… But the result of my trading is that we now have 15416 Telcoins. And at the time of writing, these are worth 47.88 euros. Which is again a small dip because 10 minutes ago I saw 49.83 euros.

And because I really like what is happening with this coin, and the fact that it is the first coin that was bought WITH approval and interest from my partner, I decided to dive deeper into Telcoin this week. Are you participating?

Because what is Telcoin actually?

Telcoin focuses on the network providers and enters into partnerships with these parties. Together they ensure that anyone who uses a particular mobile network can also use the Telcoin.

This makes it possible to send money (Telcoin) directly via the mobile network, also across borders. This means that many more people around the world have a way to store and send money.

Telcoin had its ICO in 2017 and between December 12 and December 31, some $ 25 million was raised to get through the first 36 months. The project was started with this and now Telcoin is out of the ICO phase and launched on Kucoin. With a maximum supply of 100 billion, of which 25 billion were released during the ICO, there is still plenty of room to step in now that Telcoin can be traded on Kucoin. Over the next 10 years, the remaining 75 billion Telcoins will slowly enter the market.

To focus first on the international remittance. There is a remittance when, for example, you work in another country and want to send your earned money to your home country. This happens a lot all over the world, the estimated turnover in this market is about 500 billion annually.

This happens a lot, especially in developing countries. People work hard abroad to support the family in their home country. But the money they earn must first be returned through the bank. On average, such a transaction quickly costs 7-8% of the total amount. This is a lot of money for these people. Telcoin wants to be the first to facilitate this remittance traffic.

With Telcoin it is possible to send funds to someone else directly from your mobile device. The fees are considerably lower because it is done via the own mobile network and with Telcoin. The difference is about 1% fee with Telcoin and 7.5% with an average other organization that arranges the transactions. People in developing countries can now freely spend this difference, which means they have more resources at their disposal.

Telcoin focuses on mobile phone payments for everyone, including people outside the "West". The potential target group is therefore enormous. If Telcoin knows how to position itself as a "mobile bank", this could turn out to be wonderful for Telcoin's price expectations.

There are many Telcoin price predictions on the internet, some more credible than others of course. Below you will find an overview with some price expectations for Telcoin. (For this predictions I kept the price in dollars because you guys are mostly used to dollar prices I think).

And as you can see from the chart below, Telcoin is currently well on track with these price expectations, and has started to rise significantly in the last 24 hours. Because at the moment the 15416 Telcoins we have in our wallet, are already worth 52 euros! Not too bad if you consider it was only a 20 euro investment. Which leads me to the next question, should I sell now and buy back more tokens later, or should I wait ... and how to decide this? I'm not feeling confident enough about my knowledge about interpreting the charts. And considering my partner yelling at me, "DON'T SELL! HODL". 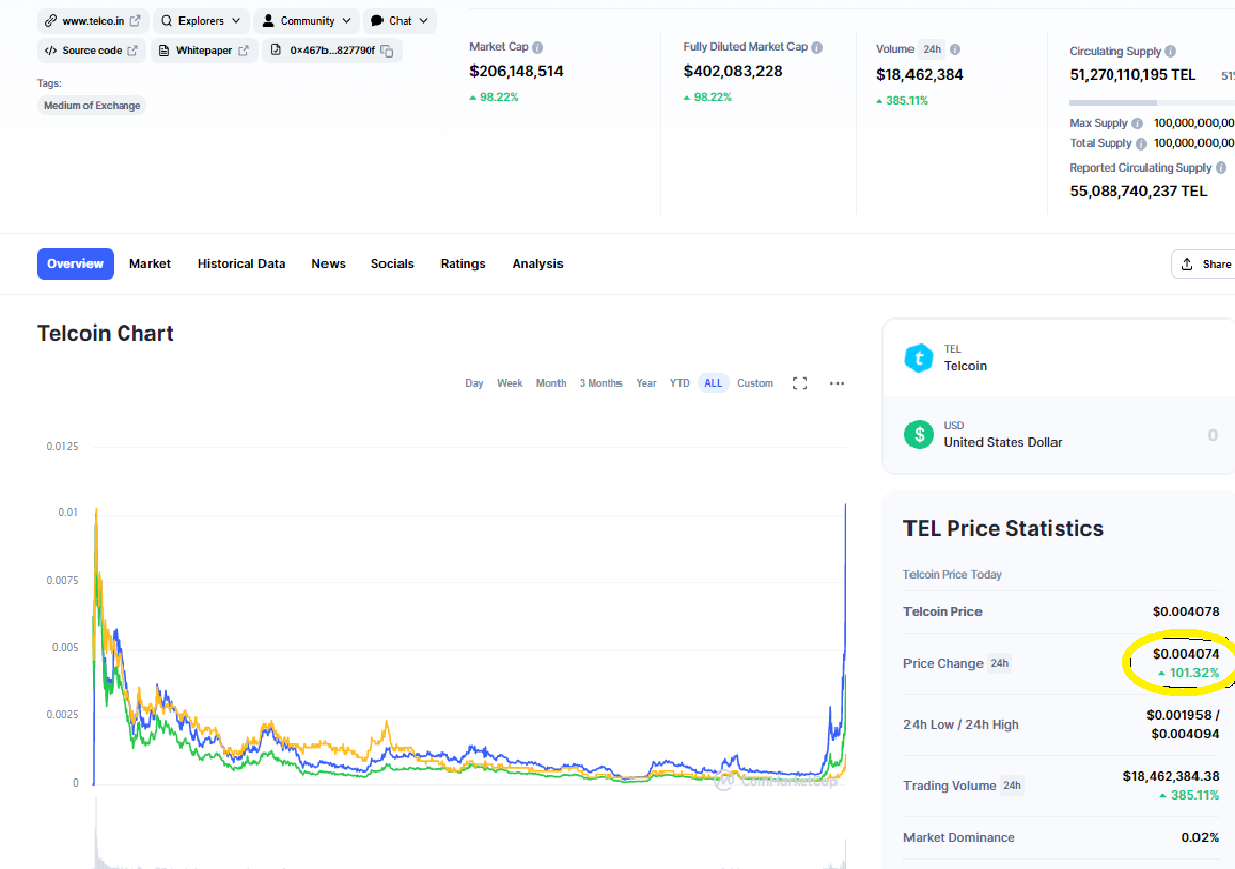 I feel good with this Telcoin, and am curious about your opinion on this. No, this token will not be the new Bitcoin, but if you have little to spend, you can still take a nice penny on these types of small coins. And as for the use case of this token, I think they have tapped into a good market where there is a lot of profit to be made.