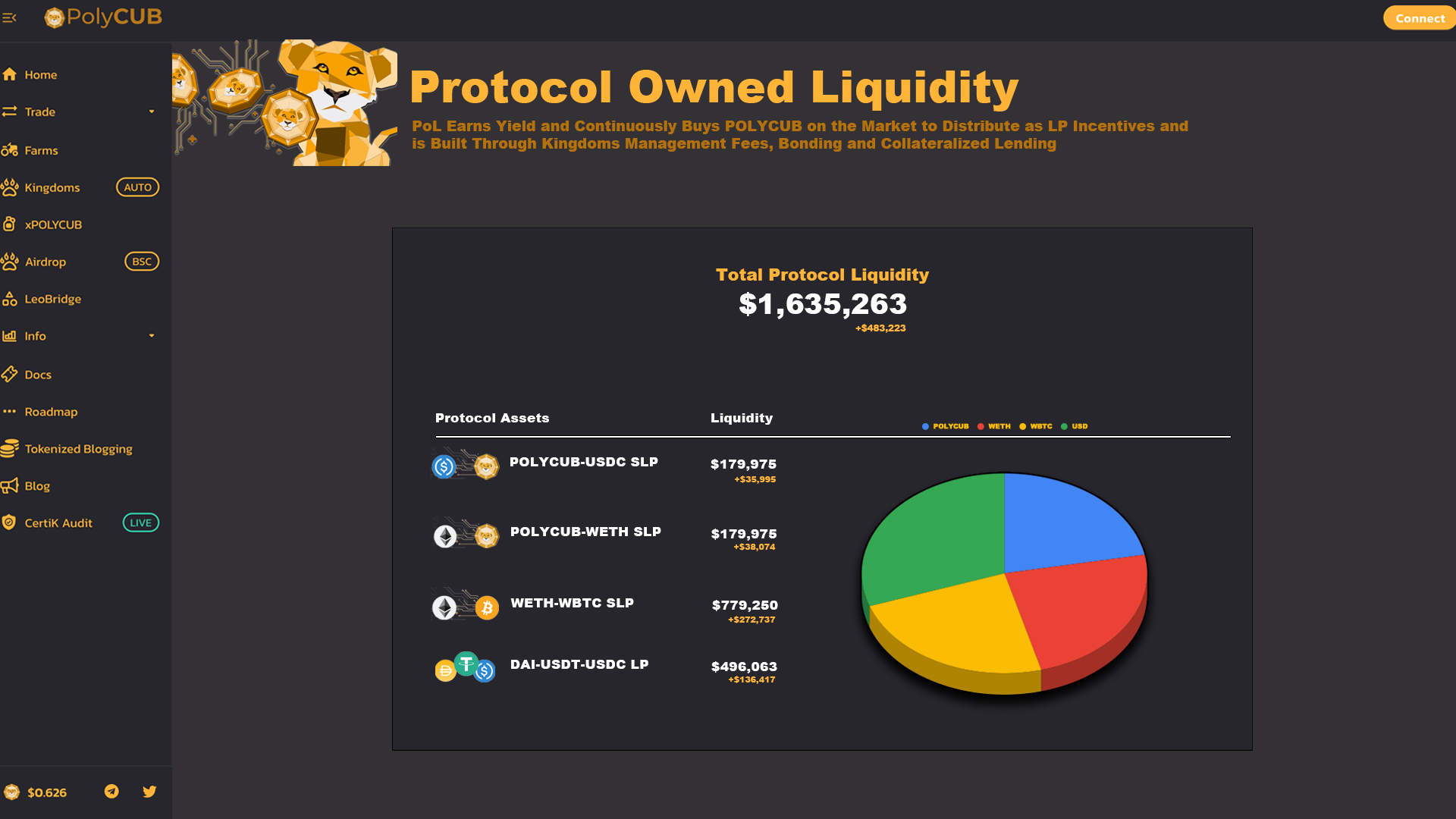 Create a sustainable DeFi Yield Optimizer for the LeoFinance Web3 Ecosystem on the Polygon Network.

We're still in the first inning of realizing this mission statement but so far, the numbers are on pace to achieve this. While the POLYCUB price isn't performing as many expected it to, we are seeing the other metrics aligning for our long-term ambitions.

Keep in mind that in the early stages of POLYCUB, the yield optimizer is designed to have ridiculously high and unsustainable yields. This is meant to drive in user liquidity, attention from the external DeFi community and most importantly: distribute POLYCUB into as many diversified Diamond Paw holders as possible.

If you see the vision, then you get what we're aiming to achieve here. I've seen many talking about how they don't understand the long-term prospect of POLYCUB and why it will have any value in the long-run as the halvenings continue to even out the yield until we reach "normal" levels of DeFi yield (in the 20-50% APY range).

Perhaps this is the team's fault. I'd like to own up to that in making POLYCUB extremely difficult to understand and quite honestly not having enough documentation pre-launch. While we put out dozens upon dozens of posts, talked about POLYCUB for 7 months leading up to the launch of POLYCUB, it is still an insanely intricate platform with mechanics that are far beyond what is happening in the rest of the DeFi Yield Optimizer space.

What we're working to build here is nothing short of the best opportunity to expand our Web3 Ecosystem into the broader crypto space. This is the first step in a long journey.

So, What is the Utility?

This is likely the #1 question and rebuttal to any bullish statements about POLYCUB. There are a handful of people that continue to question the long-term utility of POLYCUB.

That's understandable, we're still in the DeFi 1.0 stage of POLYCUB where yields are stupendously high and the emissions per block are causing massive sell pressure.

These questions miss the long-term purpose of POLYCUB. Don't forget our mission statement:

Create a sustainable DeFi Yield Optimizer for the LeoFinance Web3 Ecosystem on the Polygon Network.

In 2 hours, we'll see the next decrease. 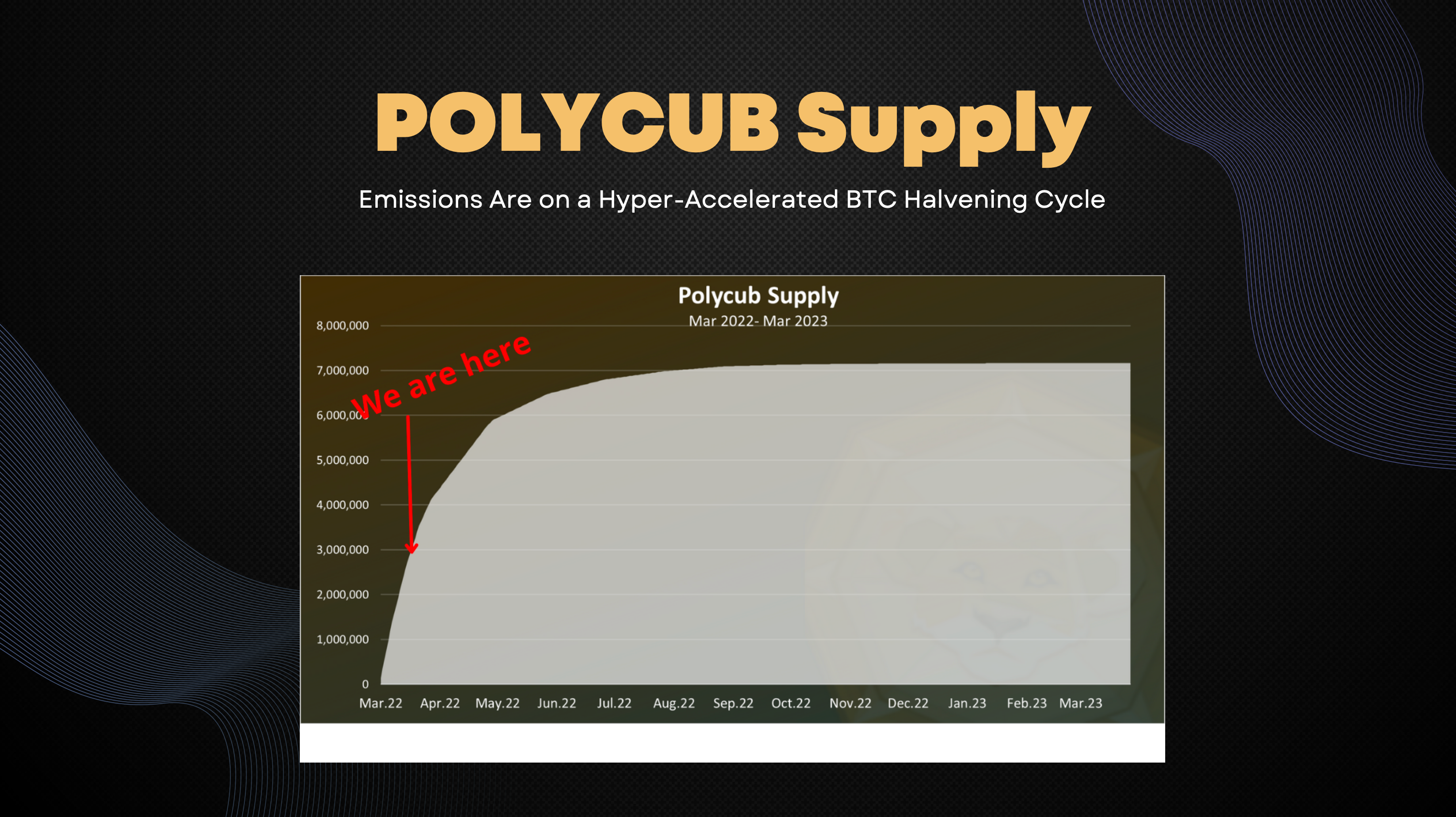 When you follow this curve, you'll see POLYCUB emissions start to become near-zero around the July/August timeframe.

Obviously, dropping emissions is a defensive strategy in and of itself. If the plan is simply to drop emissions and make it harder to earn POLYCUB in the long-run, then obviously the game is defensive and we're working only to prevent selling pressure of POLYCUB not drive buying pressure.

This is why the utility components that we've spent the last 7 months building for POLYCUB are key to the long-term sustainability of POLYCUB. We need utility to drive buying pressure while the emissions rate halvenings are driving down selling pressure. 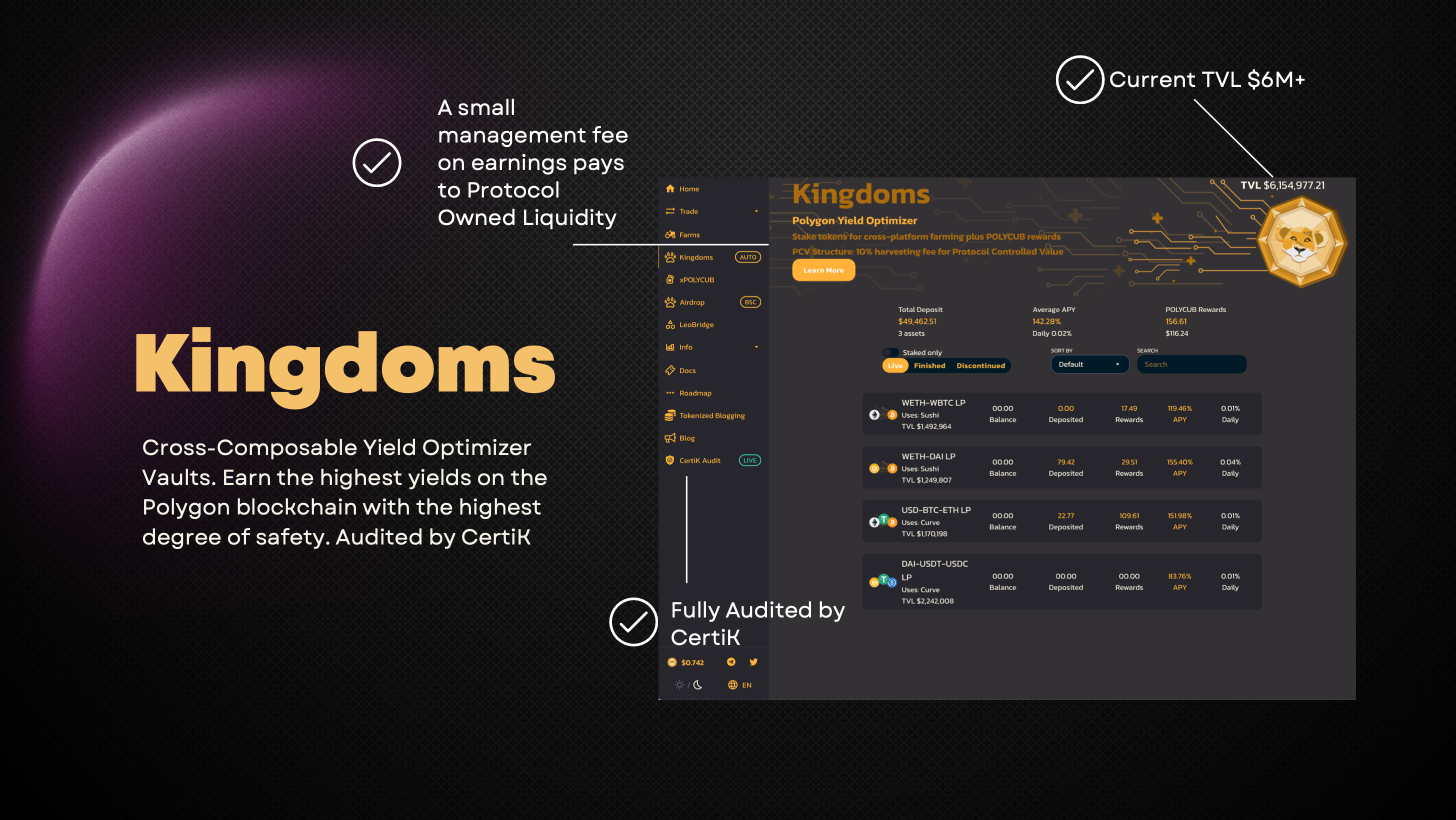 Kingdoms are the yield optimizer component of POLYCUB. This is the opportunity that we are bringing to the table with POLYCUB. We're allowing the expansion of our community to take advantage of liquidity pools on an entirely new blockchain network while also driving inbound attention to LeoFinance's Web3 Ecosystem by encouraging DeFi users to get familiar with us, our community and the opportunity of Kingdoms for their asset yield optimization.

We've seen record levels of newsletter subscribers, Hive account signups via LeoFinance.io and other KPIs since the launch of POLYCUB.com. 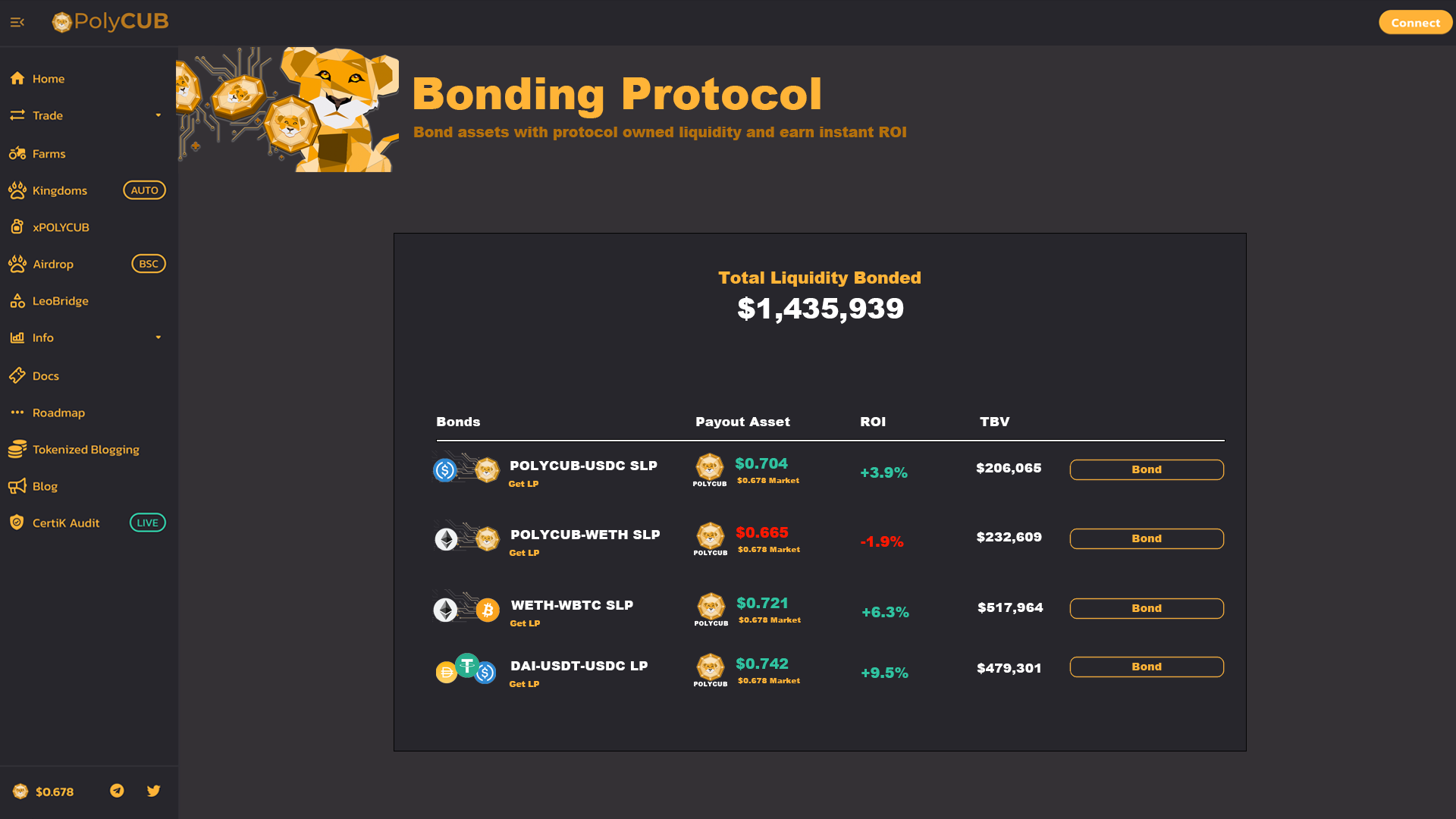 Bonding is one hell of a protocol. It changes the landscape of Protocol Owned Liquidity and allows it to build a massive treasury very quickly.

We're in the final stages of testing and are working our hardest to get bonding out ASAP. 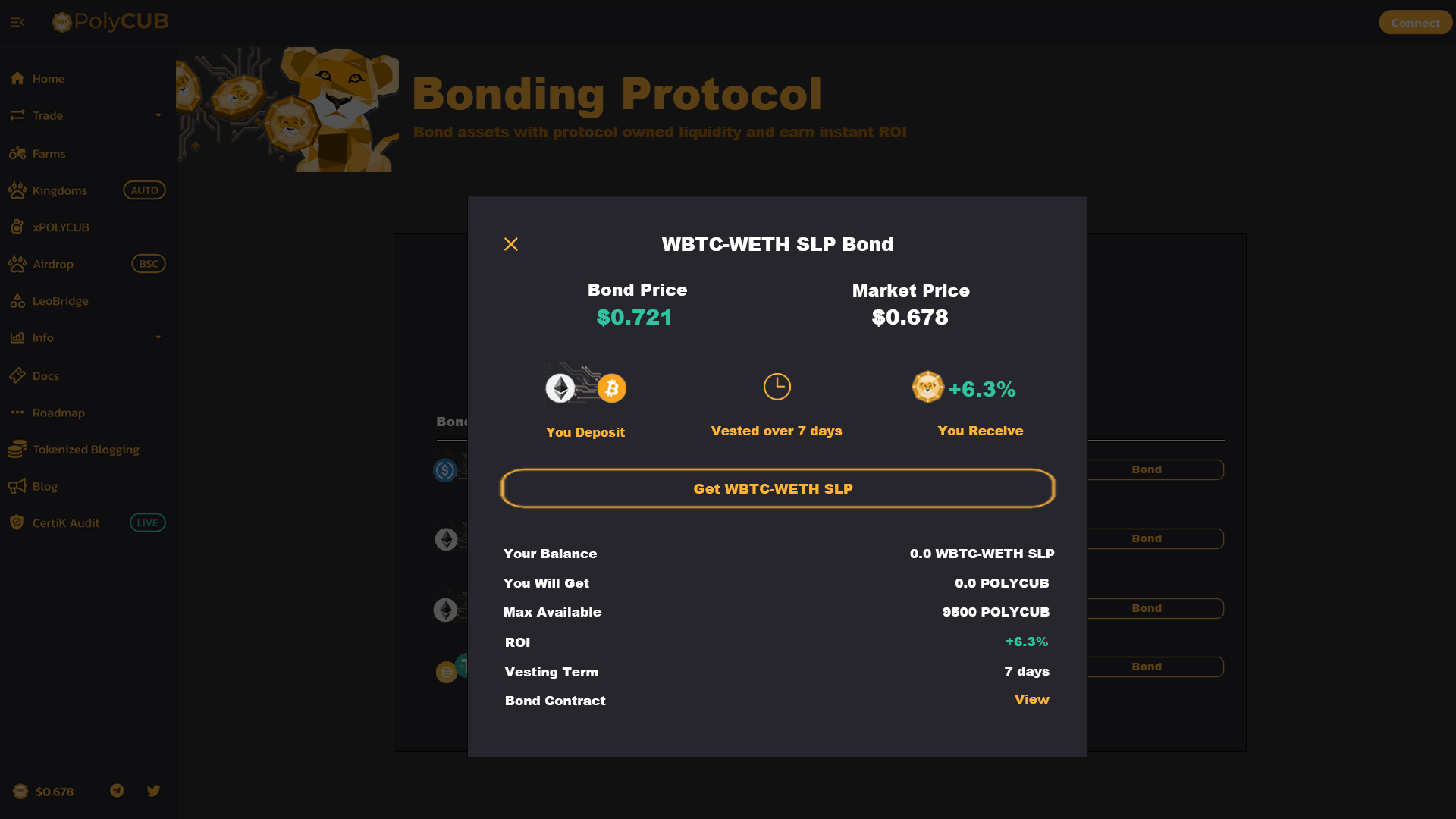 Bonding allows users to trade LP assets with the Protocol Liquidity in exchange for discounted POLYCUB. The discount is typically a small % profit (or sometimes, a loss) and is entirely dependent upon market conditions for POLYCUB and the Bonding mechanism itself.

If you want to learn more about bonding, please read the new docs page for it at: https://docs.polycub.com/mechanics/bonding-protocol.

Protocol Liquidity is built through Kingdoms Management Fees, Bonding and Collateralized Lending. PL earns yield and uses it to buyback POLYCUB and distribute to the LP Incentive Pool.

When Bonding goes live, we'll release the Protocol Owned Liquidity page which tracks the current total PoL and a breakdown of the assets it holds.

Protocol Liquidity is used for multiple purposes but the yield it generates is used for only 1 purpose: buy POLYCUB and distribute it back into the POLYCUB daily rewards pool (which is earned by xPOLYCUB stakers and LPs across the platform - Kingdoms and Farms).

The second part of this is something that we have not spent much time diving into. The plan is to release the deep mechanical designs for this once we get closer to actually launching Collateralized Lending, which will follow closely after bonding.

The key to Collateralized Lending is to already have some degree of sustainability in the POLYCUB token itself. This is to ensure higher levels of security via xPOLYCUB collateralization values.

For now, understand that you will be able to:

Utility is the name of the game for POLYCUB. Scarcity is a component as well. You'll notice that we said Utility 3x and Scarcity 1x in this title. This is for 2 reasons:

Generating Utility for POLYCUB is the objective of the platform. The fact that POLYCUB is also a scarce asset (only 7.2M will ever exist as the emissions rate halvens each month) is just an amplifier on top of that utility.

If you only have scarcity, then the token will have no value.

If you only have utility and 0 scarcity, then to token will decrease in value continuously (see fiat money as an example).

To summarize, the near-term mechanics that we've already designed and built for POLYCUB to create lasting value through Utility AND Scarcity are:

Questions? We'll be in the comments answering them and will also include them in the upcoming LeoFinance Weekly AMA on Tuesday!

PolyCUB is an incredibly complex platform but it is designed to have extreme degrees of utility. We're building the future here but we're still in the first inning. Watch as the mechanics unfold and sustainability continually increases through BOTH scarcity and utility.