pHBD brought about a radical shift in the platform dynamics of PolyCUB. We envisioned the launch of pHBD adding a lot of value to PolyCUB, but we had no idea just how much value it would bring.

Just a few days after the launch of pHBD, we realized that a step function change in the PolyCUB platform was necessary. We saw that pHBD was generating thousands of dollars in revenue for the PolyCUB Protocol every single month and was far outpacing the value accrual of Kingdoms.

Armed with this data, we set out on a mission to launch pHIVE and pSPS. Now, we've got 3 of these 2nd generation vaults that generate 5 methods of value accrual for the PolyCUB Protocol.

These new vaults have completely changed the dynamics of the platform. Since they launched, we've now seen POLYCUB reach all-time highs in terms of stability and low price volatility.

It's incredible to see this in action. The Governance backend is also now deployed and PolyCUB DAO has been running in the background for a few weeks.

With the Governance UI on the way and vexPOLYCUB about to launch alongside it, we're seeing a massive expansion in the utility of owning POLYCUB tokens.

The vision of POLYCUB is to build a platform where everyone on LeoFinance and beyond can earn safe, reliable and growing yield.

The new direction of POLYCUB is one that looks somewhat like Thorchain in a way - the new V2 vaults are all paired with POLYCUB.

This makes POLYCUB the base settlement asset of the PolyCUB Economy. By doing this, all arbitrage, all trading volume, all LPs run through the POLYCUB token.

The value this generates is immense. When 1 trade occurs on POLYCUB-USDC, an arbitrage trade immediately happens on POLYCUB-WETH, POLYCUB-pHIVE, POLYCUB-pSPS to even out the prices and arb them back to equilibrium.

As an LP, this means that you're soaking up trading fees earned from all this arbitrage in addition to the inflationary APR paid by the PolyCUB Protocol.

Our vision of creating safe, reliable and growing yield has become clear. By building these V2 vaults and getting liquidity added to them, we're seeing increased rates of arbitrage, trading volume, APY for LPs, etc. that are outside of normal inflationary measures.

Combine these factors with the Multi-Token Bridge - where the POLYCUB Protocol owns the oracle bridges - and all of the value accrual that it brings through wrapping fees, internal arbitrage and oracle staking (staking HBD on-chain, HIVE on-chain and SPS on Splinterlands).

24 hours ago, the POLYCUB halvening took place. This dropped the # of POLYCUB tokens released per block from 0.5 to 0.25.

Now, there are roughly 10,500 POLYCUB created per day. At current prices, that is just $1,600 per day that is added to the supply of POLYCUB.

When you also adjust for the 30 day claiming period, the amount of POLYCUB that can potentially hit the market is extremely low and spread out.

PolyCUB V2 vaults combined with the multi-token bridge generate tens of thousands of dollars in monthly value through the 5 methods of value accrual:

Combine this value accrual with the scarcity of the POLYCUB supply and you can see that the flippening is upon us. With only $1600 per day created to incentivize LPs, the Multi-Token Bridge, Kingdoms Revenue and Protocol Owned Liquidity now all work together in an attempt to generate more value than is created through inflation.

In next month's halvening, we expect to see the flippening occur: where more value is generated by the PolyCUB Protocol than is actually paid out to LPs.

The result? POLYCUB's price must increase in order to bring this ratio back to equilibrium.

As POLYCUB's price increases, we see the LP APYs increase as well - since the APY is determined by the value of the POLYCUB being paid out to the vaults.

As of 6/20/22, the total liquidity of POLYCUB-paired vaults is $414,000 USD while the total market cap of POLYCUB is $950,000. That's ~43% liquidity / market cap ratio which is healthy. Our goal is to increase this ratio which means creating a highly liquid marketplace to buy and sell POLYCUB.

There is some interesting game theory to be played out as the APYs fluctuate, Governance drives yields to different vaults, the Protocol buys POLYCUB on the market and the price dynamics shift.

Obviously, these are just the hardline fundamental mechanics. You never know what speculation can add to this mixup. That's where studies of protocols like Thorchain can come in handy - where there's a speculative multiplier that is almost always 3x the deterministic value.

This post has talked at length about fundamental valuation and putting hardline metrics to the price of POLYCUB. What about speculation? What about Utility? What about reasons to hold and own POLYCUB? 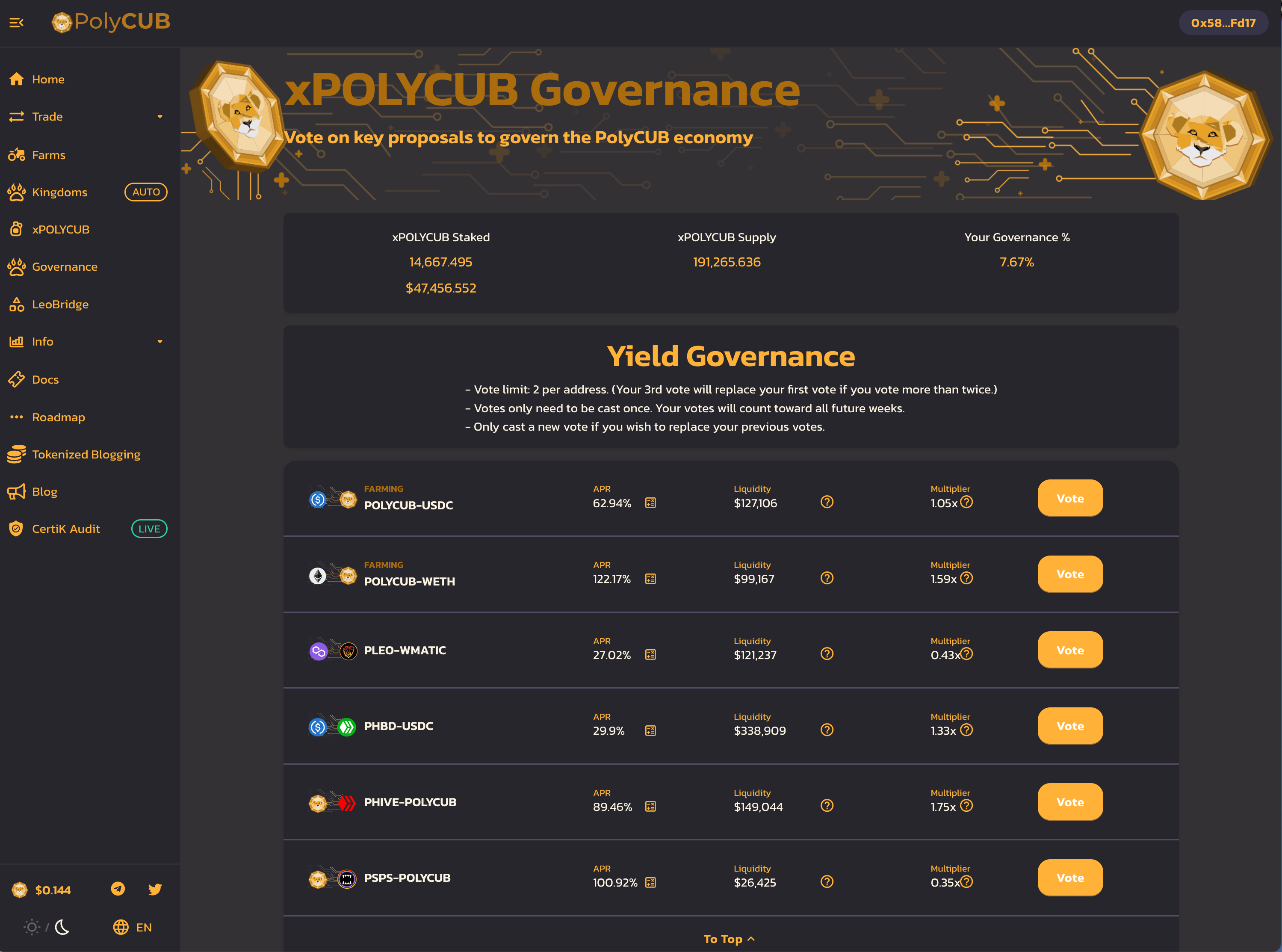 The Governance backend is live and we've successfully tested the rollout of the PolyCUB DAO.

Only about 20% of users have actually participated in the xPOLYCUB Yield Governance voting.

Many have said this is because the UI isn't live yet, so users aren't incentivized enough to go through the hassle of sending transactions manually to participate in Governance.

Governance is the ultimate utility for POLYCUB. It generates so much value to anyone who holds POLYCUB and LPs assets on the platform.

Wen we deploy the Governance UI, we expect the # of users who participate in the weekly Yield Governance votes to radically increase above that 20% participation rate.

What happens when all of this goes down? We'll have to wait and see.

The goal of POLYCUB is to create safe, reliable and growing yield. Our interest is in creating a platform where anyone on LeoFinance and beyond can feel comfortable LP'ing assets and earning yield in a sustainable way. Few platforms have achieved this but even fewer platforms have gone through the steps we've undertaken to build platform mechanics that are all aimed at radical value accrual.

Many have talked about the price of POLYCUB 10x'ing to $1.50 and beyond from the bottom-of-the-barrel valuation that it is at right now. This is not just likely, this is determined. The fundamental value accrual metrics combined with the radical reduction in supply dynamics combined with Utility to own POLYCUB to participate in Governance and control the Yield Dynamics of the Liquidity Pool Vaults is all it takes.

... and we haven't even talked about vexPOLYCUB and Collateralized Lending yet.

It’s gonna add massive utility to being a PolyCub holder. I know @edicted is expecting a 10x in the price by then

well that would be spectacular

as long as there are no critical errors I'd say 10x at least for utility like that. still would be a tiny microcap even with the 10x

Most don’t get the upside potential of us pulling this off. PolyCub could be a life-changer for all of us.

Most don’t get the upside potential of us pulling this off.

You don’t get it or you do get the upside potential?? 😜

This is the #1 thing I'm waiting for.
!PIZZA

Great steps towards creating a very safe and reliable yield for polycub ,also waiting to see what vexPOLYCUB and Collateralized Lending as to offer too

I know by now I should know what a DAO is... Decentralized Autonomous Organisation right? Jut what does it mean really?

Great progress PolyCub has made since it's launch. With the halvening having happened yesterday, PolyCub would be more scarce that ever. Looking forward to governance UI live going live, more participation from users on that one and most importantly collateralized lending and other features. Interesting times ahead

I agree - the governance is a big focus moving forward. The fact that PolyCub has functional governance is underrated. Right now, it’s under appreciated since the UI for governance isnt live yet.

Once it’s live, everything will change.. very quickly.

HBD is especially good as we know liquidity is a real issue for HBD. When you are solving a real problem, it tends to have a larger impact on price and utilization.

(psst, vote for the HBD pools)

Vote for the HBD Pools rigghhhtttttttt?!!!!!!! This was on my mind the whole time. Like, why not.

Right!? I can’t believe more aren’t voting for them!

There’s very low voter turnout at the moment. I believe that when xPOLYCUB’s governance UI goes live, there will be a radical shift

Haven't had much time for computer work these last few weeks.... so I only voted on the very 1st governance vote. Tomorrow I can get on it!

Do it! Governance UI will also be live soon, so that will help

If I don't fall asleep with my kid tonight... it's my turn for bed time!

The whole crypto market is experiencing dip right now, people should focus more on what is being built around the leofinance ecosystem more. The collateralized lending feature has been the feature I have been waiting for. Stuck in the sooniverse.

@whatsup said it best in a recent AMA: she can’t have an impact on if Bitcoin doubles from $400b to $800b in market cap… but we all have an opportunity to build LEO which only has a market cap of $500k

Even trying to buy your way into influence on Hive can be tough for many, but on Leo right now you can buy midlevel stake for a few hundred and be a whale at $3,000. In a young, strong, growing project.

I am as well. I think people have been scared off by FUD in the LeoVerse and broader crypto markets.

The funny thing about FUD and FOMO is that as soon as one turns into the other, it runs rampant.

Does that mean buying leo and staking it?

Yes! I buy some every day. Over the past few months I've moved into 24th on the rich list just with steady purchases

I have such a hard time sticking to a routine... is there a way to automate an daily buy?

Not that I know of! But dang it there should be! :)

No can do... I have no idea how to code or anything like that!!! But yes, there should be.

That's an interesting idea. It would be a little difficult because we'd need to have the ability to withdrawal funds from an account you hold.

Something could certainly be created... We actually talked about building a DCA contract on the last LeoFinance AMA when Neal asked if there was a DeFi way to automate DCA