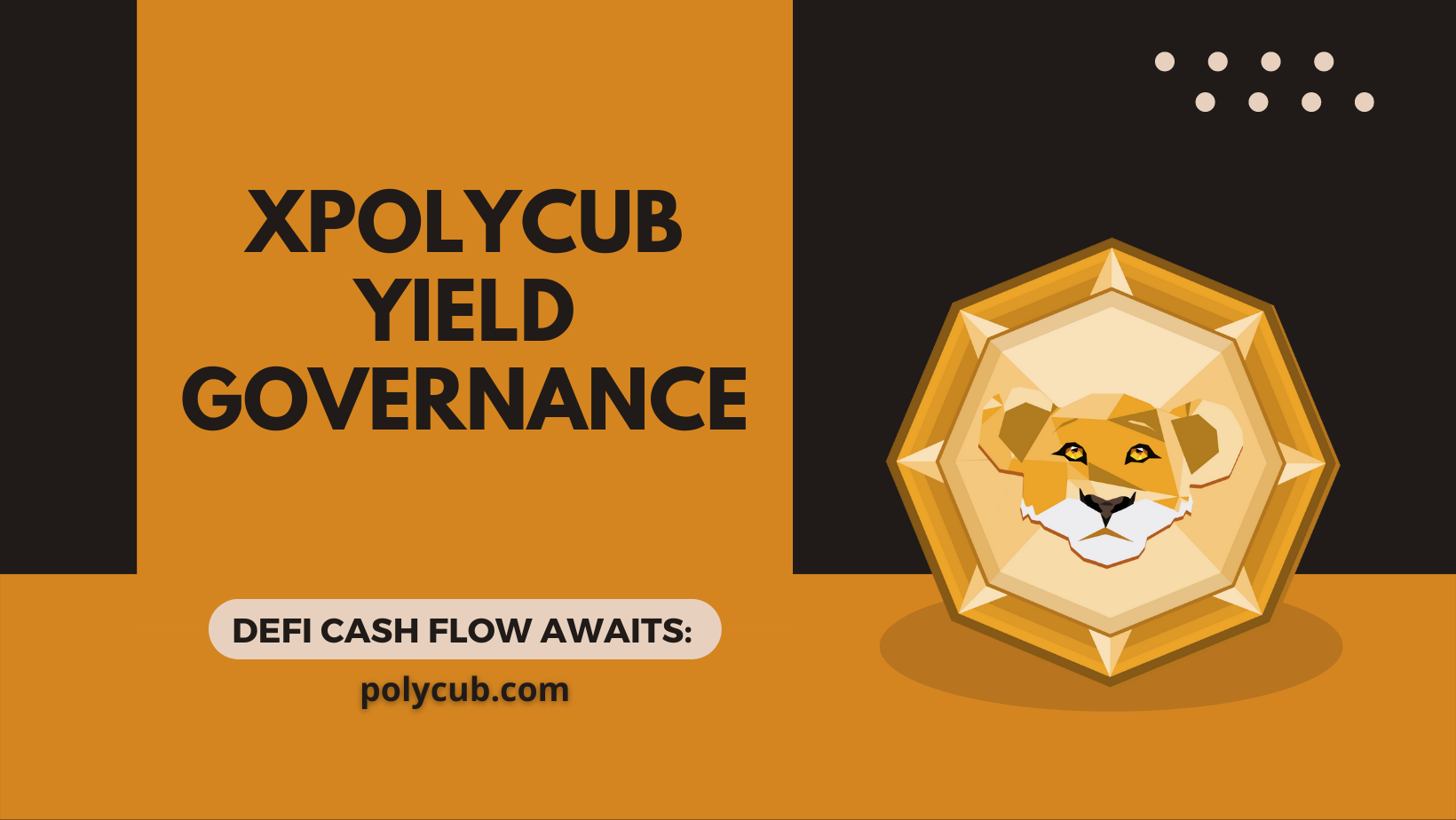 At the core of deep utility is xPOLYCUB Governance. Governance allows anyone holding xPOLYCUB to determine what happens on the platform.

As of 7 days ago, we launched the first-ever weekly Yield Dynamic Governance vote. Every week from here forward, there is an ongoing vote to determine the yields on https://polycub.com.

We've termed these vaults "V2 Vaults" as they are a radical change from the original vault design. By deploying these wrapped derivatives over the PolyCUB Multi-Token Bridge, we've allowed the PolyCUB Platform an opportunity to earn massive value accrual revenue which leads to vastly more sustainability for PolyCUB as a long-term DeFi app.

With Yield Governance now in place, there is a constant Yield War over which vaults should earn the most.

If you fall into the ladder camp, that may lead you to desire more xPOLYCUB to increase your Vote Strength on the vaults that you are pooling assets.

As yields change, we expect a lot of nascent voters to dive into governance as well as other LP's to buy POLYCUB, stake xPOLYCUB and increase their vote weight on the pools that they want to see rise to the top.

Stack Your HIVE and Provide Liquidity:

Admittedly, it was unexpected that pHIVE would get so much support. Looks like its time to stack up your HIVE and provide liquidity, that vault is getting nearly a 3x increase in the yield allocated to it.

Typically with the weekly snapshot on votes, the yields will update almost exactly 24 hours after - 24 hours is the Timelock Governance Contract we use to delay any operations on our Masterchef for security purposes.

With this first Yield Governance Vote, please allow up to 48-72 hours for the yields to update (though we're aiming to stay on pace with 24 hours, this gives us some extra time since this is the first time we're operating under the new Yield Governance contract).

Votes Carry Over Week to Week

A key component of the weekly Yield Governance is that your previous votes carry over. If you've already voted, then the only time you need to re-cast your vote is if you want to change your votes to a different vault.

Keep in mind: every xPOLYCUB holder has two votes and their xPOLYCUB Voting Power is essentially split in 2 to represent their vote strength on the two chosen vaults.

How Quickly Will Yield Dynamics Change?

The first yield vote was anticipated to have a large-scale change on the yield dynamics on PolyCUB.

Since LeoFinance's Web3 Ecosystem is cohesive, we also expect a lot of posts to come out where people aim to band together support to overthrow the #1 vault and try to raise their favorite vault to the highest yield status.

The Long-Term Vision of Governance on PolyCUB

PolyCUB's long-term mission is and has always been to create the opportunity to generate long-term, sustainable cash flow with DeFi. Right now, there is a massive discussion in the DeFi space about long-term "Cash Flow Life". We believe that PolyCUB will be one of the few platforms that can sustainably, reliably and securely deliver long-term yields.

Next on the roadmap for Governance...

Now that we've got our governance contracts deployed and we're tweaking it as we go, we're gearing up to release the Governance UI. There's a process to these things and getting the backend in order before releasing a frontend for it has been vital. Thank you for your patience as we get this together, we know it's a bit of a hassle to manually vote with your Metamask/Web3 wallet.

vexPOLYCUB stands for Voting Escrow xPOLYCUB. As complicated as it sounds, it's actually quite simple.

It's an amplifier for xPOLYCUB Voting Strength. It will allow anyone to lock their xPOLYCUB stake for 2.5 years and amplify the strength of their governance vote.

One of the major impacts that this will have on xPOLYCUB Governance is actually seeking to redistribute voting power to those who have the longest-term vested interest in the success of the platform. It allows non-whales to amplify their voting weight and compete with whales.

This is something that we straight up copy/pasta'd from Curve and it works extremely well.

There is a whole community out there of CRV holders that stake their CRV as veCRV to create what they call "Cash Flow Life".

Our goal is that POLYCUB is viewed as an asset that you buy and stake to get long-term yields. You may stake it in POLYCUB-WETH or pHIVE-POLYCUB to earn yield and keep it liquid or you may stake it as xPOLYCUB or vexPOLYCUB to earn amplified, single-staking yields + have a heavy impact on Governance.

Most of us dream of a "Cash Flow Life" setup. PolyCUB aims to deliver it and we're just getting started.

pHive-Polycub & Polycub-Weth are the ones getting the yield increase. I guess it’s the fella that bought 30k Polycub before the expiring time that boosted it. This is why it’s necessary to buy some Polycub for governing especially now that it is cheap

Yield Wars are what gives CRV the vast majority of its value.. In fact, there are entire platforms that have been built to do "Vote Bribing" on Curve where they bribe people with enhanced APY to give them veCRV.

The Yield Wars have come to POLYCUB. This being the first vote, we expected things to get shaken up dramatically.

Now, we anticipate a lot of POLYCUB staking to get yields to change in favor of certain vaults over others.

Someone bought 32k POLYCUB this morning before the vote ended and staked it all. I imagine many more will start doing this to prop up the yield in their favorite vaults.

With vexPOLYCUB, we'll add yet another dynamic to Governance which will allow users to lock up xPOLYCUB for 2.5 years to get amplified rewards + amplified voting power over the Governance System.

On our path to building the best Yield Platform in DeFi 🚀

So if I understand this correctly - holding xPolycub allows you to basically direct the inflation to the pool(s) of your choice, just like Curve, but with the monthly halvings it seems like soon there won't really be much of any inflation to direct. Am I missing something here?

Inflation halvens monthly, so we still have a ways to go. As inflation reaches the end of the curve, it will become super low relative to how many tokens are being distributed - not necessarily the value of those tokens.

The argument you have here is the counter-argument to the success of the platform long-term. We’ve designed mechanics to accrue value in various forms and that value will begin buying POLYCUB and distributing it to the LP incentives pool once that curve starts to flatten.

And will the governance votes influence the way PoL distributes rewards, for example, in the future, when inflation will be close to zero?

Yes. Just think of the yield pool as a rewards pool of money.

Right now, that pool is made up entirely of inflation.

In the future, that pool will be made up entirely of revenue accrual by the protocol.

The pool is directed by governance in both scenarios

Nice! It makes sense and gives lots of control over rewards flow to the xPOLYCUB stakeholders.

One of my votes was for POLYCUB-USDC. Now looking at this I quite like the pHIVE-POLYCUB. I shall get some HIVE to the Polygon Network and pool together with POLYCUB !

The voting period was amazing!

It is good to see that PolyCUB pools are always prioritized by long-term investors. For the pHIVE pool, I think we must have some liquid Hive to enjoy the great APR 😎

Happy to see that the pHBD pool is still quite profitable. The next Voting War will be bloody! 🦁

Definitely the token is definitely another great investment for every holder,it is of more advantage to get more at this present time too

Surprising to see pHive-Polycub getting higher votes. But whatever, 249% change is amazing.
Each governance vote may take place after a week meaning that present voting expires on its own after a week?

The staking of pHIVE-POLYCUB will be a booster, getting some hive down to get into low price of PolyCub at governance level.

Definitely I sincerely see lot of sense in this, turning some hive to polycub too is a very good idea

Crazy that more hasn’t been staked! Looks like I’ll have to load up on more HIVE!

Good to see how well the voting period as gone,so it now to enjoy it dividend

It’s going extremely well. I’m very happy with the first governance vote performance and I’m excited to see where we go from here

Going to have to stack my xpolycub.

Wise idea,more great things tend to come for every holder

Good to see that the process as come to an end and getting more polycub at a cheap price right now too is vital as more growth is expected in days to come.

It's simple, we have to tailor our mindset towards growth and sustainability. I think we ourselves are the ones that will build the dream polycub we want to enjoy. It's why everyone should be focused on that building, doing otherwise takes is one step forward the two steps backwards

PolyCub is an incredible platform in the making. Some will leave during the rough patches, but those who stay will make the generational wealth. I think we’re seeing the tides turn right now

You're absolutely right about this, the tides would turn and it's great to see go generationally impacting building this wealth would seem.

Finally it is now high time to expect more from the token too, good to see how well and how far the voting period lasted

Surprising that stakeholders see no value in the pHBD pool.

It actually was the 3rd most voted pool by a good margin with over 20k XPOLYCUB backing it.

Clearly, we need to see some stakeholders wake up and vote it. That pool generated massive value.

I have a feeling it will rise next week wink wink!

I think also that they will realize how much the protocol needs the liquidity of this farm to increase.

I believe the turnout of the vote was awesome and this definitely moving in a bright future with polyCUB.

Look at pHIVE go!
Wow that is some incredible support and a heck of an increase!

It is pretty cool!

It certainly is that!

The 2 pools I voted on. Wow! Voting will definitely increase when there's a simple UI. Maybe more whales will jump in and start a war.

Good picks! You must be a whale yourself ;)

Totally not the pools I thought would win